A handcuffed Kirby Cleveland, 37, was escorted by prison guards down the hall of the U.S. District Court building and taken into the Vermejo Courtroom to receive his sentence for the 2017 killing of Navajo Police Officer Houston Largo. 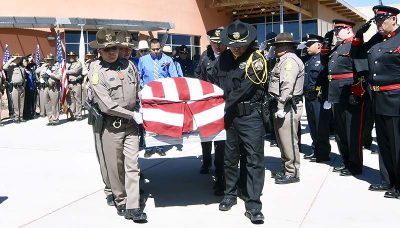 He wore a red prison jump suit with a yellow mask hanging from his neck as he walked into the courtroom. The family of Largo looked on.

In January 2019, Cleveland pleaded guilty to second-degree murder for shooting and killing Largo and on Monday he was sentenced to 30 years in prison.

“There’s really not much for me to say except that I’m sorry,” said an emotional Cleveland before Judge James Browning read aloud his sentence.

He faced a possible maximum sentence of life in prison.

According to public court records, Cleveland became drunk and angry while at home with his common-law wife and children on March 11, 2017.

His wife called the police and Largo responded.

Cleveland went outside carrying a rifle and shot Largo in the head, killing him. He then went back inside the house where he admitted shooting an officer before fleeing the scene.

State, local and tribal law enforcement conducted a large-scale search for Cleveland and located him the next morning hiding under a rock about 1.5 miles away.

Cleveland also pleaded guilty to violating the terms of his supervised release from a previous assault conviction involving an attack on a woman with a baseball bat. Cleveland had failed to abstain from alcohol and complete a residential reentry program as ordered by the court.

“Kirby has committed a very serious crime,” said Cleveland’s attorney, Theresa Duncan, as she asked for a 200 months sentence. “One that he deeply, deeply regrets.”

A day of testimony

Before the sentence was given, a day of testimony was given by two psychiatrists who had observed and administered tests to Cleveland. The objective of this testimony was to explain their findings, and to make a determination of whether Cleveland was cognitively aware that he in fact fatally shot a police officer in hopes he would get a lighter sentence. 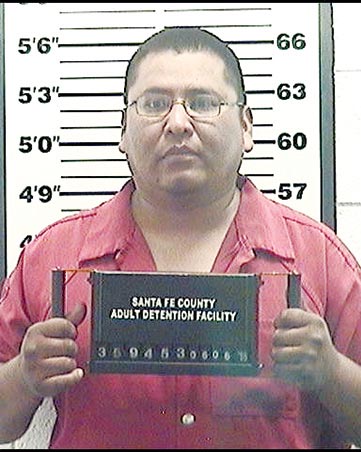 Cleveland had maintained he had no idea Largo was an officer and said he thought rather than being pulled over by a police vehicle that it was instead a white van.

Cleveland, who was intoxicated, believed that since he had thought it was a white van and not a police unit, he believed the occupants of the van were members of a family that he had a hostile interaction with previously.

Duncan had also argued Cleveland was unable to see if the vehicle as a police vehicle, which made it even more difficult to determine whether Largo was an officer or not.

Another factor was Cleveland could not make out Largo as being an officer because it was dark and he couldn’t make out whether Largo was in uniform or not.

“Given the position of those vehicles it is entirely plausible that Mr. Cleveland would not have seen the police lights when he turned to confront the person,” Duncan said. “And the court should so find.”

U.S. Attorney Joseph Spindle responded to Duncan and said it’s not about whether Cleveland knew he shot a police officer as it’s about when he knew.

“From multiple witness statements that Kirby admitted he shot a police officer,” Spindle said. “The only issue is at what point did he realize Officer Largo was a police officer?”

Spindle said the lights would’ve been visible and the unit couldn’t have been mistaken for a white van by its eflective side markings.

As for not being able to make out Largo as an officer, Spindle said he had on a uniform with a reflective stripe on the legs. A statement from a witness who was one of the first at the scene “immediately recognized” from this stripe that Largo was an officer, proving the need for full lighting wasn’t necessary to make that distinction.

He also said that from Largo’s training one of the first things they are taught is to identify themselves when interacting with a civilian.

“What is a more likely motive is Kirby Cleveland didn’t want to go back to jail,” Spindle said. “And that has been shown time and time again by his behavior.

Trying to determine whether Cleveland suffered from a brain injury from a fight days prior, which would’ve been another factor to him being unaware that Largo was an officer, was another effort in trying to get him a lighter sentence.

Galit Askenazi, a forensic psychologist, must determine what someone’s mental health status was at the time of the event. This is an objective analysis that takes into account all the evidence to prove and disprove.

But as a clinical psychologist, Lynette Abrams-Silva, works as a subjective advocate for clients in order to treat them.

Askenazi did not find Cleveland suffered from any psychological diagnosis, other than alcohol abuse. He didn’t have PTSD, flashbacks, or suffer from a concussion, in which Cleveland’s lawyers said he did.

At one point Duncan said Askenazi’s Independent Living Scales test she gave Cleveland found he was only slightly to moderately impaired, whereas Abrams-Silva’s ILS test showed him to be severely impaired but this is a subjective test.

She also said that Askenazi didn’t take into account Cleveland being Navajo, whereas Abrams-Silva gave him a “cultural competent” test.

“She did not consider Mr. Cleveland’s Navajo background,” Duncan said. “She didn’t consider testing that showed Mr. Cleveland suffers from a brain injury. Instead she only considered those things that helped her reach the conclusion that the government hired her to reach.”

Duncan then said Cleveland’s claim of hearing words that weren’t spoken and seeing things that was not there is consistent with PTSD, which is why he believed the police unit was a white van with people inside that wanted to harm him and was not a police officer.

He graduated from the police academy in Santa Fe in 2011 and was a police officer for six years. Largo had served with the Gallup city police, McKinley County Sheriff’s Department, and Navajo Police, garnering recognition from all three departments for dedication and outstanding professionalism.

‘Wanted to be a law enforcement officer’

“Houston, at a very young age, displayed his desire to be a law enforcement officer,” said Largo’s cousin, Gabriel Albert, before the sentence was given.

“We knew he wanted to be a law enforcement officer,” he said. “I told him, ‘Houston, you got to follow your heart.’ We were very proud of Houston. He was a model citizen.”

She spoke of his accomplishments such as graduating high school with honors and was a Gate’s Millennium Scholar, and how he was an independent person, and how he always wanted to go into law enforcement.

“It’s been so hard,” said Charley, who wanted Cleveland to get a life sentence. “He took care of us.”

Delegate Edmund Yazzie, Division of Public Safety Director Jesse Delmar and Navajo Police Chief Phillip Francisco were the only Navajo officials that attended the hearing in support of Largo’s family.

Francisco was only six months into his new job as chief of police when Largo was killed. He said the family and the department have waited a long time for this sentencing.

“It’s not quite what we, at the police department or the family, wanted,” Francisco said. “We wanted the maximum sentence of life, but it did sentence him under the enhanced statute for killing a police officer.

“We hope this sends a message to the public that our police officers work hard,” he said. “They put their lives in danger to protect everyone else and if anyone assaults or hurts a police officer they will be held accountable.”

In 2018, federal prosecutors chose to not pursue the death penalty for Cleveland although that had been the intent. The Navajo Nation opposes capital punishment, but Delegate Yazzie believes that should be something Nation should reconsider especially when it involves the death of an officer.

“I wish the Nation would have capital punishment, especially when someone takes the life of a police officer while they’re on duty should they be found guilty,” said Yazzie.

“Of course, the Nation doesn’t have that,” he said. “So, I wish it were life in prison. Thirty years, I don’t know how you can compare that when a life is taken forever.”