Diné College and Navajo Nation officials gathered on Monday  (June 28) for the official groundbreaking ceremony for the new $7.4 million math and science building that will be located at the Shiprock south campus. 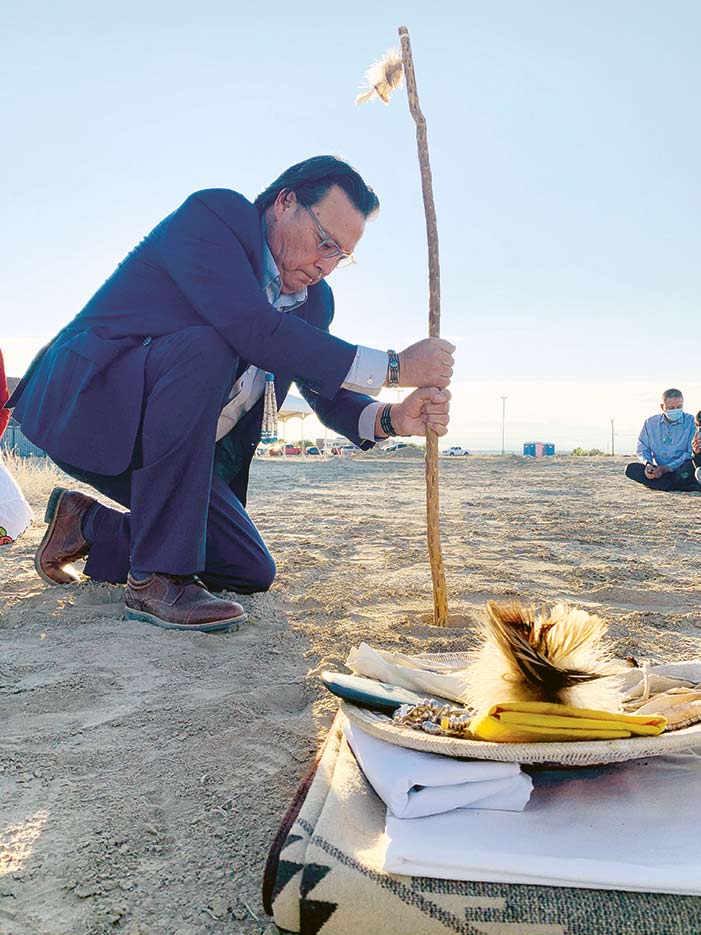 Courtesy photo | Diné College
Diné College President Charles Roessel holds a planting stick, which is believed to be the original stick used in 1971 when the main campus was built in Tsaile, Ariz., at the groundbreaking ceremony on Monday for the new facility at the Shiprock campus.

According to a news release, Board of Regents President Greg Bigman said, “Our vision is to create the next generation of competitive students who are grounded in not only science, technology, engineering and math, but also their culture and language.

“It’s the dream of our people,” he said. “We want to cultivate innovation and address inequities to keep up with modern technology and advance our nation to provide a better quality of life for our people. We want to lead the way.”

Diné College President Charles Roessel, speaking to an estimated 70 in attendance, said, “The most important thank you goes to the citizens of the state of New Mexico because they are the ones that voted for this $5 million bond.

“This building is about $7.5 million, $2.5 million came from the creativity, ingenuity and commitment of the board of regents,” he said. “When something is that important, we find a way.”

Due to the pandemic, the event was closed to the public.

Mark Bauer with Diné College said, “Diné College’s public health program and the Navajo Research Center for Health Partnership are anchored at the Shiprock campus. The bachelor’s in public health degree was first offered in 2018.”

“Current Census data shows that the primary focus of jobs on the Navajo Nation are in the field of STEM,” Tutt said.

The 17,116-square-foot building will include math and science departments, instructional classrooms, laboratories, a student common, offices and meeting rooms.

The facility is funded through general obligation bonds approved by New Mexico voters in 2018 and Capital Outlay funds from the state.

Construction will begin this month and is expected to be completed by March 2022.

Delegate Daniel Tso said, “The voters of New Mexico put education first and it was demonstrated. We are so thankful for the citizens of New Mexico. We are doing this so our children can have pride and say they have a place where they want to learn.”