Pvt. Mason successfully completed 10 weeks of intensive basic training as one of 240 recruits in which he was designated to 1st Platoon part of the “Deathrow” Delta Company, 3-34 Infantry Regiment 165th IN BDE.

Pvt. Mason was part of an elite group of 12 soldiers selected out of 240 recruits to be promoted to the PV-2 U.S. Army rank from PV-1. This promotion received was a result of outstanding performances and grade throughout the boot camp session displayed by the 12 soldiers.

Pvt. Mason is the son of Eddie Mason Jr. and Michelle Mason from Tsaile.

Pvt. Mason is a 2014 graduate from Chinle High School. 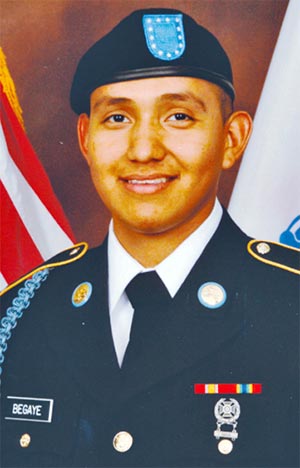 The Turning Blue Ceremony was held March 19 in the Baker Company area. Graduation took place March 20 on the parade field adjacent to the National Infantry Museum and Soldier Center at Fort Benning.

Pvt. Begaye is the son of Randin and Christina Begaye. His siblings are Kylie Begaye, Hayliegh Begaye, and Juwon Begaye, of Sanders, Ariz. Paternal grandparents are Charles and Lillie T. Morrison of Cedar Point, Ariz. Maternal grandmother is Irene Bowman of Sanders.

Pvt. Begaye is a graduate of Valley High School in Sanders.