As the two-year anniversary of her disappearance nears, the family of Pepita Redhair is still hoping for resolution to her missing person’s case and they are appealing to the public for help in finding her. 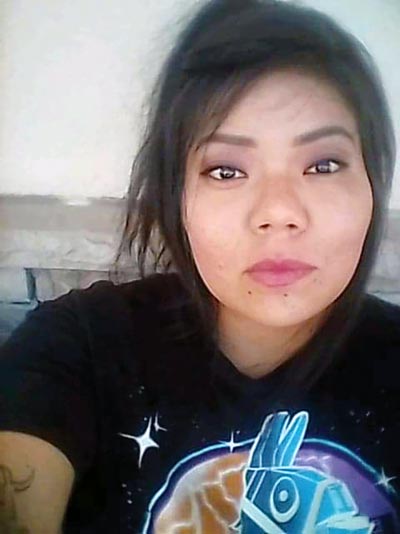 Courtesy photo | Anita King
Pepita Madalyn Redhair was 27 when she went missing on March 27, 2020, in Albuquerque. She is originally from Crownpoint. Her family asks that if anyone sees her, to call 911.

“Pepita Madalyn Redhair is my daughter,” said her mother Anita King, who is from Crownpoint. “She went missing on March 27, 2020, from her boyfriend’s place in the South Valley, Albuquerque, New Mexico.”

King describes the grief and anguish of not knowing what happened to her 27-year-old daughter as never ending.

She said heartache will not go away until she is found.

“The day she went missing, my life has changed,” said King. “It was so emotional and so sad that I went into depression and I couldn’t sleep. I isolated myself. I didn’t want to talk to no one.”

Livingston said they recently set up a GoFundMe account to raise money so that a reward can be offered for information that leads to finding Pepita.

“If you see something, say something,” said Livingston. “If you saw something and you’re afraid to say something pertaining to my sister’s disappearance, you can remain anonymous.”

‘Free to be missing’

Pepita travelled back and forth from Albuquerque to Crownpoint regularly to visit with her mother, where her room at home is still intact, said King.

When King dropped Pepita back off at her boyfriend’s house in Albuquerque on March 24, 2020, she didn’t know that was the last time she would see her daughter.

When Pepita went missing, King said she had the intuition that something had happened to her because her daughter normally stayed in contact with her by phone.

“She always called me every day, saying, “Mom, what are you doing? What are you up to? Do you need anything?’” said King.

She said Pepita would have called if she went away somewhere.

“It’s not her that she would just disappear,” said King.

On March 28, 2020, King reported Pepita missing and she was entered into the national missing persons database.

“Albuquerque PD, the day I reported her missing, they couldn’t help us,” she said. “The cops kind of just brushed it off. They said she’s an adult. She’s free to travel. She’s free to be missing, I was told. I was pretty upset.”

King said the APD told her she needed to work with the Crownpoint Navajo Police Department, since that is where Pepita was from, even though she had lived at her boyfriend’s house in Albuquerque for over three years, according to Livingston.

“She was not homeless,” said Livingston.

However, Crownpoint PD told King they needed to go back to APD because that’s where Pepita was last seen.

“That’s why we went back to APD and they told us, OK, we’ll start investigating,” said Livingston.

However, because the COVID-19 pandemic had just started, the APD police were not doing in-person interviews with potential witnesses, said King.

The lockdowns and stay-at-home orders also made it hard to travel and caused delays, she said.

“I wish we could have done more,” said King. “But the excuse was the pandemic, COVID.”

King said she was disappointed and traumatized by the lack of response from the Crownpoint PD because she lives near the police station.

“They did nothing,” she said. “They said it was out of their jurisdiction because it happened in Albuquerque. I was told she is an adult and we can’t help you because she was missing out of Albuquerque.”

After that, she never called them again, she said.

“There was no help,” said King. “I would just walk around thinking, who do I call?”

This week, Senior Public Information Officer Christina Tsosie for the Navajo Nation Police told the Navajo Times the NPD has been working to “strengthen partnerships and resources” in regard to victim services for families of missing loved ones.

“In some cases, individuals are reported missing with off-reservation law enforcement due to their last known location, as is the case with Pepita Redhair,” said Tsosie.

She said NPD is aware a missing person report has been filed with the Albuquerque PD for Pepita and she has been entered into the National Crime Information Center, a database that provides law enforcement across the nation access to information.

“We are periodically contacted by the Albuquerque Police Department to follow up on possible leads and we continue to support their case in any way we can,” said Tsosie.

On their own, King, Livingston and other family members went to look for Pepita several times in Albuquerque in the vicinity of her boyfriend’s house after she went missing. But nothing was found.

“We did flyers,” said King. “I printed them out at my own expense.”

They have also participated in numerous Missing and Murdered Indigenous Women and Relatives gatherings on and off the Navajo Nation.

Last October, after witnessing the search for Gabby Petito that swept the nation, King and Livingston decided to hold a rally just for Pepita in Albuquerque to raise awareness.

“We were so overwhelmed trying to find answers,” said Livingston. “I said, you know what, Pepita’s name needs to get out there.”

She said the week after they held the rally, APD investigators called them and said they wanted to do an interview.

“The prior investigator went to cold case and they kind of put it to the side,” said Livingston. “When we did the rally and the news went out, that’s when they finally contacted us. They told us they wanted to hear our side of the story.”

“It went around the world that we’re raising awareness for my missing daughter,” said King. “That’s when everybody got involved.”

However, they haven’t heard anything yet, said Livingston.

“There’s no trace, there’s no lead yet,” said King. “The detective from Albuquerque is working on the case. They won’t give me the whole information. They say it’s confidential because the case is active.”

King says it’s frustrating to have no real answers, despite the efforts made to find Pepita to date.

“It’s an ongoing loss,” she said. “It seems like we’re not getting all the help now but at least the detective is doing what he can. He checks up on me every now and then.”

King says her job in Gallup keeps her busy during the day, but nights are really hard.

King said because of COVID-19 restrictions she has not been able to get counseling, but she has occasional behavioral health calls, and depends on her children for support.

“For my spiritual belief, I pray, I cry,” she said. “I just read my Bible and pray. I ask heavenly father, if she’s there, give a sign?”

King said on June 4 there will be another awareness rally at Tiguex Park, from 1 p.m. to 4 p.m., in Albuquerque for “justice and answers” for Pepita and everyone is invited.

Livingston said she wants to urge Navajo communities to stick together and watch out for their relatives.

“To all the families on and off the reservation – be vigilant,” said Livingston. “Take care of your kids, the girls and the boys. Look over each other.”

To donate to the “Missing Pepita Redhair” reward fund, visit: https://gofund.me/ae037f61. The family asks that if you see Pepita or know anything, to call 911.