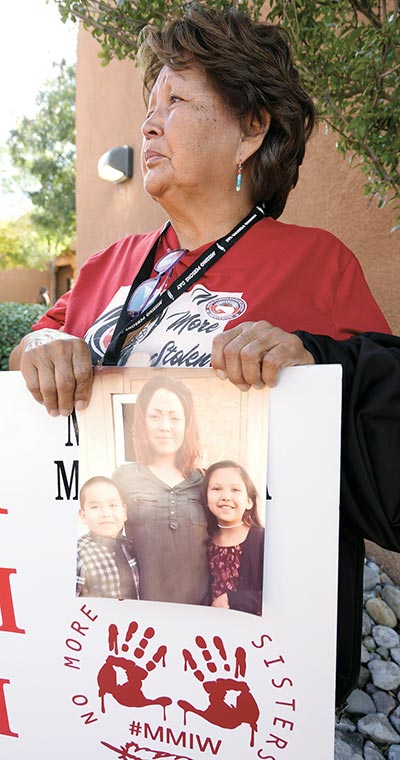 Navajo Times | Donovan Quintero
Rose Yazzie holds a photo of her daughter, Ranelle Rose Bennett, who is posing with her children, on Saturday during the Missing in New Mexico in Albuquerque.

Ranelle Rose Bennett is part of a growing list.

Her mother, Rose Yazzie, held back her pain and tears as she shared her story with Albuquerque Special Agent in Charge Raul Bajunda on Saturday at the Indian Pueblo Cultural Center, where the inaugural Missing in New Mexico was held.

Yazzie held a poster and a photo of her daughter, flanked by her family, as she recollected the ordeal she’s been living with to Bajunda.

Yazzie said her daughter, a former Kirtland Central High School volleyball player, was supposed to come to her house to celebrate her daughter’s birthday.

Yazzie went to Hogback to remind her to go to her house in Farmington. She said she noticed her daughter kept looking toward her room, so she asked her if her boyfriend, KJ, was there.

“She said, ‘Yeah,’” Yazzie recalled her daughter telling her.

She left and returned home and waited. Soon, the party was about to start, and Bennett had not yet arrived.

“Her daughter kept texting her, and she goes, ‘Mom, you’re gonna be here, mom? Remember it’s my birthday. Did you forget my birthday?’ Yazzie remembered.

She never made it to her daughter’s birthday party.

“We started cleaning up, and she still wasn’t there,” Yazzie said.

Though sick with worry, Yazzie gave Bennett the benefit of the doubt and waited for her to contact them. After three days, the concern became too much, so she went to the Shiprock Police District to report her daughter missing.

Instead of being received with professional courtesy, Yazzie said she was told the reporting police officer was “too busy” and that he’d get to it soon. Two weeks later, Yazzie’s request for a missing report was filed.

Yazzie’s story is an all-too-common story: a mother goes to a Navajo Police Department to report their child missing. Police respond callously, and a missing person report is eventually filed.

Yazzie is convinced her baby would have been found if the requested missing person report had been filed sooner.

“We’ve been trying to do at the police department is just be more transparent to as much as our laws allow our laws allow us to,” Noon said on Saturday.

Noon said the department couldn’t divulge too much information because of the Navajo Nation’s Privacy and Access to Information Act. 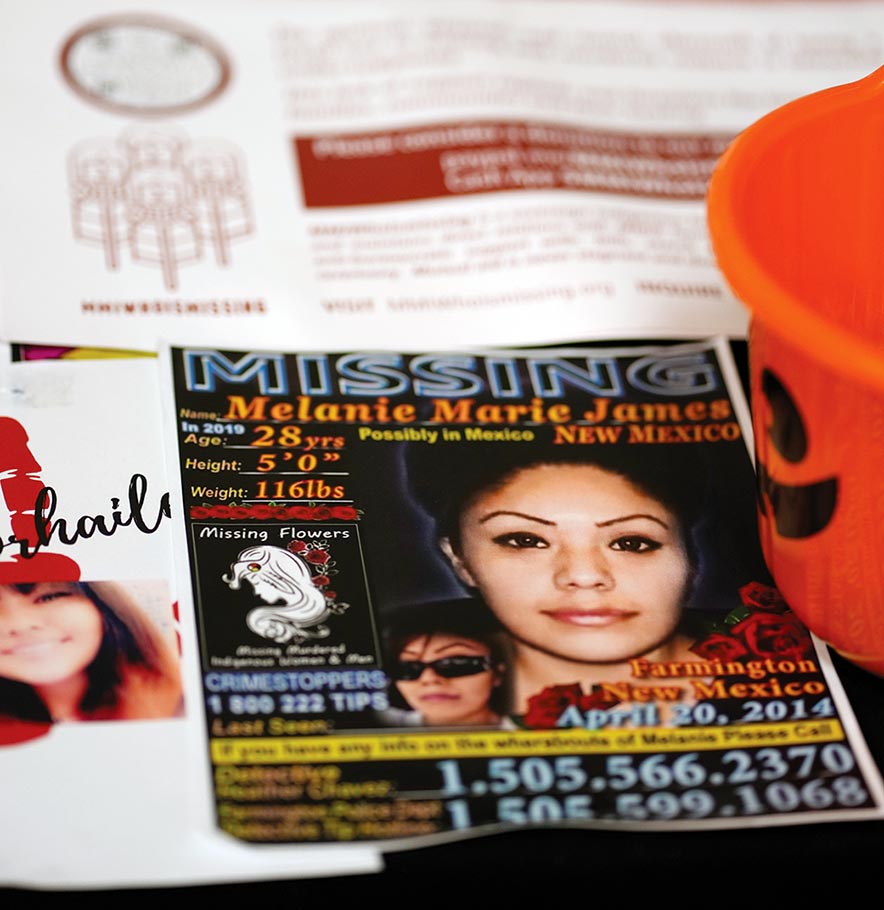 Navajo Times | Donovan Quintero
Missing person Melanie Marie James, who has been missing since April 20, 2014, is shown on a table alongside other photos of missing Indigenous people on Saturday during the Missing in New Mexico in Albuquerque.

The privacy act, according to the Title II of the Navajo Nation Code, gives the Navajo Nation Council the authority to monitor and coordinate what information can be released to the public. The “Council,” the laws state, “recognizes that a democratic form of government requires that information related to government operations be accessible to the public while preserving the privacy interests of individuals and entities.”

“I’m referring to specifically is the Navajo Nation Privacy Act. It’s pretty restrictive; it’s worded to where I think people can have their own interpretations of it,” Noon said of the privacy act. “I think that we probably should be giving more information than we normally do.”

Noon said he spoke to a criminal investigator about possibly hosting a similar event in the Navajo Nation.

According to New Mexico Gov. Michelle Lujan Grisham, the purpose of the Missing in New Mexico event is to deliver answers to families across the state.

“While these measures will not on their bring an end to this crisis, they are important tools in our continued fight,” Grisham said.

Grisham signed Senate Bill 13 – sponsored by New Mexico state Sen. Linda M. Lopez, Sen. Shannon Pinto, and Rep. Andrea Romero – into law in February of this year. It established an annual one-day event that brings together many law enforcement agencies from across the state to one place where they could assist and serve families and victims.

Saturday’s event also had families provide DNA samples that could be used to identify deceased victims. The event also gave families and law enforcement the to update or file missing person reports.

In addition, New Mexico became the public safety department to modify its National Crime Information Center, or NCIC, Missing Person form that allows reporting agencies within the state to identify Indigenous people and their respective tribes, pueblos, or nations.

Noon, who was on hand to speak to Navajo families and other law enforcement agencies, said he would look to see if the police department could host a similar event.

“I thought, ‘That’s a great idea.’ We’ve got a facility, and maybe we ought to do it. So that’s something that I’m going to look at when we want to go back next week and see if we can’t put something together,” Noon said. 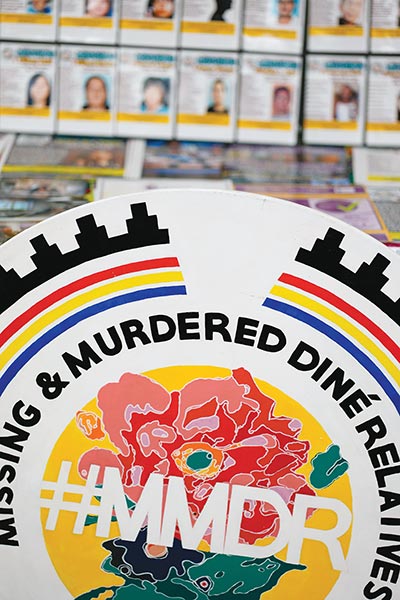 Navajo Times | Donovan Quintero
A sign with Missing and Murdered Diné Relatives sits in front of a collection of photos depicting missing and murdered Indigenous people on Saturday during the Missing in New Mexico event held at the Indian Pueblo Cultural Center in Albuquerque.

According to the N.M. Department of Public Safety, New Mexico has 984 missing person cases, along with 20 unidentified missing persons they’ve reported to the NCIC.

The FBI in New Mexico also released how many missing persons the federal agency is investigating. As of Oct. 11, the FBI listed 192 missing Indigenous people.

The FBI launched the project in July that began with 177 missing Indigenous people. Since the launch, they’ve added 27 additional missing-person cases.

Begay’s niece Seraphine Warren, arrived at the nation’s capital in Washington, D.C., on Oct. 10. Warren’s journey began on June 15 – during the same time when Rose Yazzie, a year earlier, started becoming concerned for her daughter, who never arrived at her daughter’s birthday.

Yazzie said two weeks after the Shiprock Police District filed a missing person report, a search for her found her sweater and shoes on the north side of Shiprock, which is about 13 miles west of Hogback, New Mexico.

Yazzie said investigators searched but did not find anything else.

“I’m not really sure what to think,” she said.

Yazzie admits her daughter was into drugs and alcohol, but that does not mean it should deter people from coming forward with any information they might have.

Her daughter, Yazzie said, was a person who opened her home to people who needed a place to stay.

“She had a big heart to where she took people in,” she said of her daughter, who was 33 at the time of her disappearance.

She spends her days hoping Ranelle walks into the house.

“I wonder about her. I wonder if she’s cold or if she’s without her shoes,” Yazzie said.

She suspects Bennett’s boyfriend, KJ, may know something.

People said he had many girlfriends, and he would just leave them way out in the boonies,” she said. “(He would) have them take their shoes off and have them walk back from so many miles. I wonder if she’s out there walking.”

For women in Begay’s 45 and 64 years of age category, the CDC did not list homicide as a top 10 leading cause of death. And a 2016 National Institute of Justice report, Indigenous women were more than 84% likely to experience violence.

Bennett’s case remains active and is being investigated by the BIA Missing and Murdered Unit. She is 5 feet, 1 inch tall, with black hair and brown eyes, and weighs 125 pounds. She has two tattoos, one of a name, “Treasten,” on her inner forearm and a letter “B” behind her left ear.

The FBI said Ella Mae Begay’s gray or silver Ford F-150 was last seen leaving her residence near Sweetwater, Arizona. The FBI believes the truck may have been driven toward Thoreau and may have proceeded to Albuquerque. Begay’s pickup truck has a broken tailgate and has an Arizona license plate, AFE7101.

Yazzie said she understands police can’t reveal much information about investigating cases. What frustrates her is the lack of effort police put into keeping her updated.

“The last time I talked to them was like the beginning of the year,” Yazzie said.

Yazzie suggests that Navajo police should hire more people and build a new police department, which might help improve things.

“And to have them get more drones for searches and ATVs because, at the time, I asked for an ATV, and they denied me,” she said.

Yazzie began to weep and pleaded with the public to come forward with any information.

“If anybody know where my daughter is – at least the last time they seen her or something – or who she was with, contact the Shiprock Police Department.”