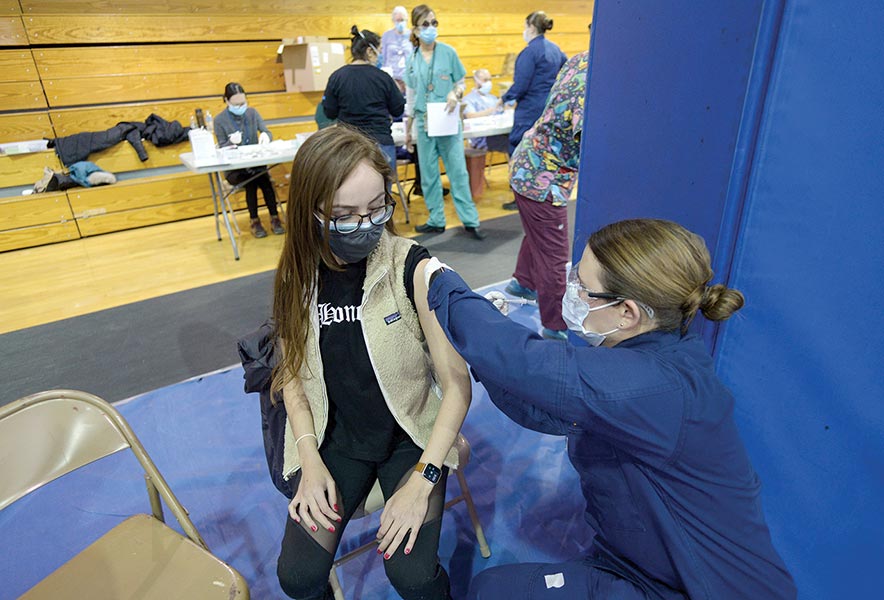 Navajo Times | Donovan Quintero More than 74,000 people living on the Navajo Nation have received at least one dose of the COVID-19 vaccine, the highest percentage in the country.

For once, something is going right on the Navajo Nation. Like, very, very right.

Some 44.5% of Navajos living on the reservation have been vaccinated for COVID-19 at least once. That’s more than any state in the union (the closest competitor is Alaska at 15.2%). Way more than the country as a whole (12.8%). And more than any country in the world except the tiny, oil-rich United Arab Emirates (44.8%).

While most states are still trying to get their over-65 population protected, at least one Navajo hospital (Tse Hootsooi) has lowered the age to anyone over 18 (which is basically everyone who can be vaccinated with the Pfizer formula; the vaccine has not yet been approved for use on children).

About 98% of the tribe’s vaccine supply has been used, and another 28,000 doses are expected this weekend.

How is this poor, very rural tribe that once had the highest number of COVID cases per capita in the world managing to get vaccines into arms so quickly? It’s a perfect storm, but in a good way, said Diné authorities. “It’s a number of things,” said Ramona Antone-Nez, director of the tribe’s epidemiology center.

For one thing, while states, counties and private hospitals in other parts of the country are often running parallel programs with different signup protocols, all the entities involved on Navajo agreed early on to cooperate. “It’s a coordinated effort between the Navajo Nation, the Navajo Area of the IHS and the tribal health organizations,” Antone-Nez explained. “We have frequent meetings to assist with the coordination of the vaccine rollout.”

Public information officers from each entity are sending out consistent messaging, she added, bolstered by strong support from both the president and Council. The vaccination team, with representation from both the IHS and Public Law 93-638 entities, “is constantly on the go,” Antone-Nez said. “There’s a lot of moving parts to keep track of.”

President Jonathan Nez (no relation) agreed. “The various health care facility staff have done an outstanding job,” he said, noting that he has been at vaccination events all over the Nation and observed the same level of efficiency and competence. A statement from the IHS explained how the partnership works. The COVID-19 vaccines (first Pfizer and later Moderna) were distributed to the health care facilities with ultra-freezer capability, then parceled out by the Navajo Area Emergency Operations Center to health care clinics throughout the Navajo Nation (except for in Utah, where the ’638 Utah Navajo Health System chose to receive its vaccine supply from the state).

“The vaccine distribution for Navajo Nation was based on user population,” the statement continued. “The distribution is fluid and dynamic and is adjusted according to the need for COVID vaccines at each of the facilities. “There are exceptional vaccination administration teams at all of the health care facilities across Navajo who provide the vaccinations by appointment,” the statement said, “at walk-in events and at large community vaccination events.”

Meanwhile, President Nez said his office has been “advocating behind the scenes” for more help from the Biden-Harris administration, the IHS and the Department of Health and Human Services, and the efforts have borne fruit. The new administration has been particularly easy to work with, according to the president. “Within days (after taking office), President Biden signed the major disaster declaration,” he said. “Some of the resources we can get from that include manpower to help with our vaccine distribution.

“Our health workers won’t admit they’re wrung out, but I’ve seen it,” he said. “Manpower from FEMA, from the Department of Defense, from Health and Human Services are here. Now that we’re getting that needed help, our health workers will be able to take a much-needed break.”

Nez also took some credit for lifting the 57-hour weekend curfew so more people could be vaccinated and getting the message out via his regular online town halls. “We’ve had Dr. (Anthony) Fauci, Dr. (Albert) Bourla from Pfizer, Dr. (Laura) Hammitt (from Johns Hopkins), Dr. (Loretta) Christensen from the IHS, Dr. (Michael) Tutt from Tse Hootsooi letting people know the vaccine is safe and effective, answering people’s questions,” he pointed out.

While he admitted there’s been a lot of wild misinformation about the vaccines on social media, “it’s been a positive tool for us.”

Both Nez and some of the Council delegates put their arms where their mouths are, so to speak, volunteering to be among the first to receive the vaccine. “It wasn’t about jumping the line,” Nez said. “It was about showing people it was safe. Some people who were on the fence about the vaccine decided to take it once they saw us doing it.” But there is another element to the successful vaccine rollout that Antone-Nez says shouldn’t be forgotten: the Navajo people.

“Their interest is what kept this all going,” she asserted. “You can have a beautifully planned vaccination event, but if no one comes, no one gets vaccinated.” Jonathan Nez said it’s too early for anyone to let their guard down — “We’re not out of this public health emergency yet” — and there is still much to be done, including tracking down isolated elders who don’t have transportation to the clinic.

“Now that we have the Moderna vaccine, which doesn’t have to be kept at extremely cold temperatures, the CHRs (community health representatives) and PHNs (public health nurses) are working with the chapters to identify these relatives and run the vaccine out to them,” he noted. The president said the vaccination team has set a goal of 100,000 total vaccinations by the end of February, which would be nearly 58% of the reservation’s population.