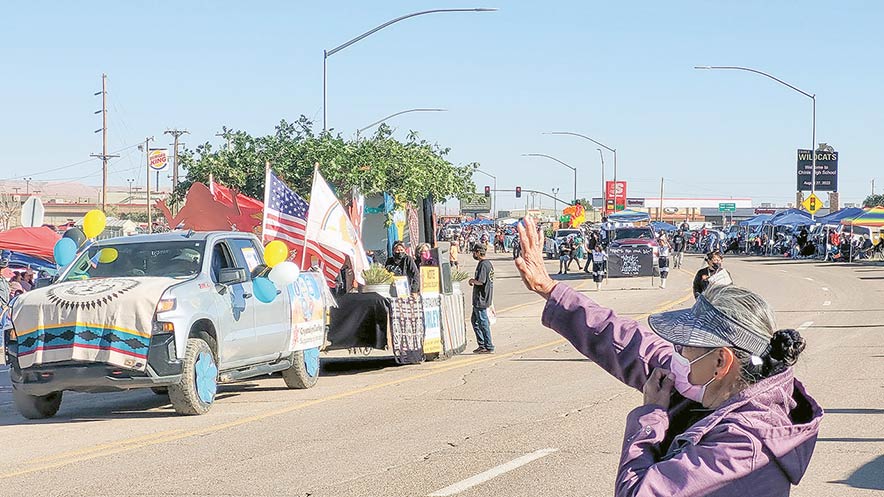 Navajo Times | David Smith
Adults and children stand alongside U.S. Highway 191 as they cheered on the 36th Annual Central Agency Fair on Aug. 27, in Chinle.

From Aug. 22 to 28, Chinle hosted the 36th annual Central Agency Fair for the first time in three years since the start of the COVID-19 pandemic.

Despite the ongoing global pandemic, Bess Yellowhair-Simpson, president/organizer, said she and her fair staff did everything to make the event safe.

“It’s been wonderful to bring the organization back together after two years, but we were very excited to put it on,” Yellowhair-Simpson said. “Because we want to see people come like they’re doing right now, song and dance and the sound of people singing and having the rodeo. It’s been a while since we had it here.

“And it’s really been wonderful … to have all these people come in together and embrace each other,” she said. “For some of them, they haven’t seen each other for quite some time.”
She regretted that they could not have a carnival for the fair because it would have been too challenging to keep all the attractions cleaned and require people to maintain a safe six-foot distance.

But she felt positive that there were other activities for people to enjoy.

On Saturday, the parade opened the weekend events, including traditional song and dance, a powwow, a dog show, a rodeo, and mud bogging. 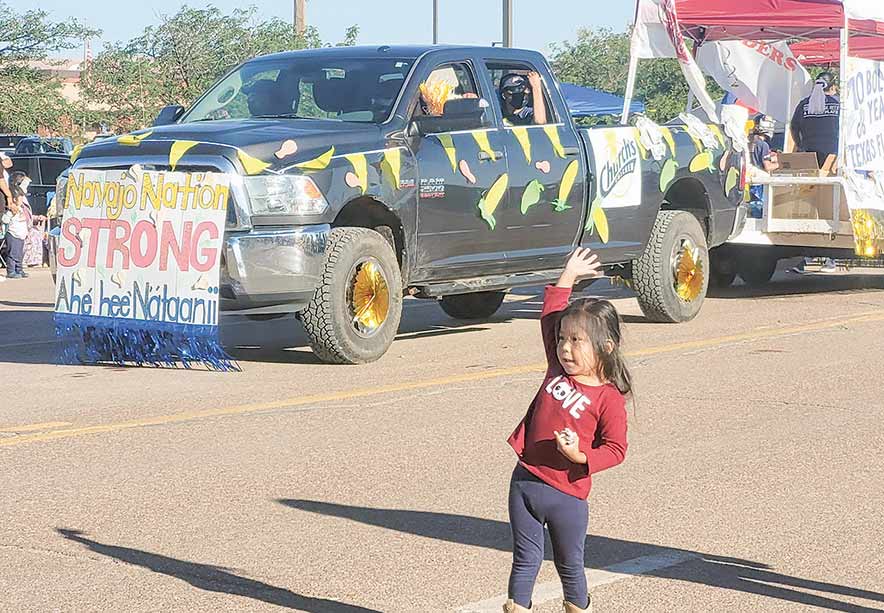 Navajo Times | David Smith
A toddler waves at floats in the 36th Annual Central Agency Fair parade on Aug. 27, in Chinle. The theme for this year’s fair was “Navajo Nation Strong,” signifying Diné resilience during the COVID-19 pandemic and honoring those who lost their lives to the disease.

Sporadic rainfall showers sprinkled on the festivities but it was a blessing, especially in the hot summer, said Yellowhair-Simpson.

The parade was primarily seen as a success, giving a feeling of normalcy as people gathered along the main road of Chinle while doing their best to follow Covid safety precautions.

Yellowhair-Simpson said she was a little apprehensive that the parade would have only 28 floats, but by Saturday, there were 56 entries – all bringing something new to celebrate.

Leading up to the fair, Yellowhair-Simpson and her staff debated on what this year’s theme would be: what it was they would be celebrating.

“We talked, and many comments were made, but we thought Diné, Navajo Nation strong – we’ve come out strong,” she said.

“Even though we’ve gone through a tremendous amount of pain for people that have lost their loved ones,” she said, “it was very emotional when we came to talk about that, a lot of comments were made, but they felt we’re strong, stronger than ever.”

Yellowhair-Simpson knows that many people weren’t happy with the lockdowns, but she believes the Nation was able to come through the pandemic because of the precautions.

She said the public health crisis strengthened family ties and relationships. And people worked to adapt to the pandemic and strengthen people. 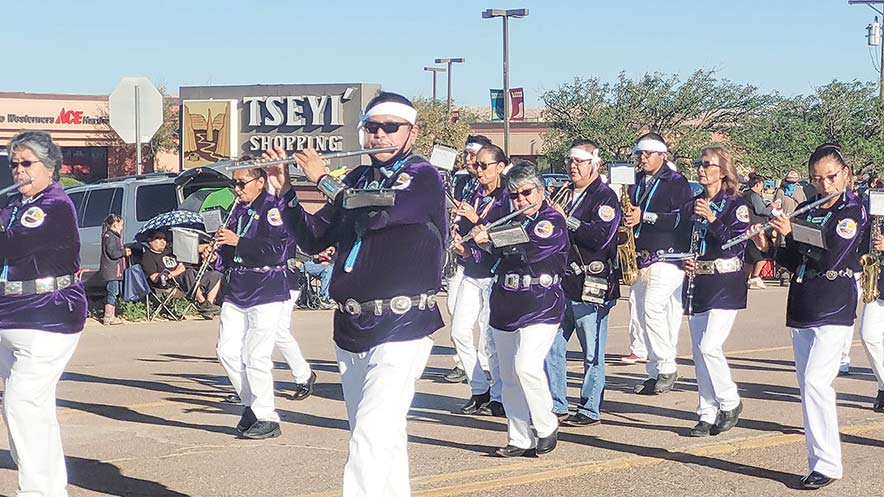 The parade showed many people wanted to gather, be happy, and have a good time again.

Yellowhair-Simpson said she was worried about the fair budget shortfall and not having as many donors as before. But with donations from political candidates, the fair hosted many events, had plaques for prizes, and provided security.

They also did their best to set up sanitation stations and enforced the Centers for Disease Control and Prevention’s Covid guidance.

Yellowhair-Simpson thanks everyone who took part in the fair. She said the fair wouldn’t have happened if it weren’t for everyone pitching in and doing their part.

From donating food to maintaining security, she thanked all the employees, volunteers and especially those who participated in the activities.

She thanks her team for helping to organize everything, Anne Manuelito, the fair vice president, and the treasurer, Emma Charlie.

She also thanks the former fair secretary, who resigned before the fair but helped with the organization.

“To the people that came and supported us, ahéhee,” Yellowhair-Simpson said. “For all the participants we have here, if it weren’t for those (who) came through that gate, we wouldn’t have had a good time.

“I’m smiling today because we all had a good time, and I know we’re going to defeat Covid,” she added. “We see this throughout, everybody following the requirements, which is what we wanted it to be. Thank you, everybody, ahéhee’.”