Nez and Lizer self-quarantining after exposure to infected person 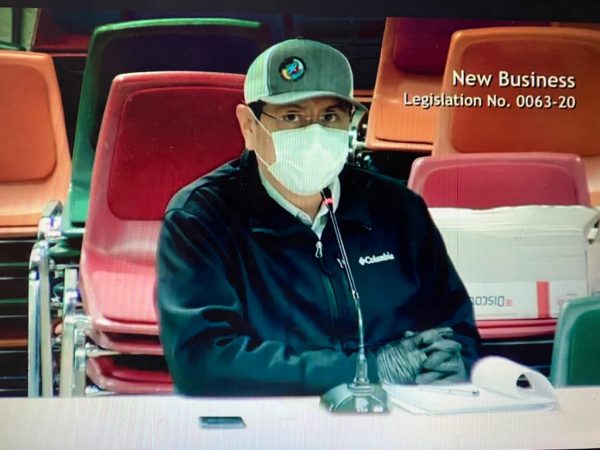 Navajo Nation President Jonathan Nez and Vice President Myron Lizer are in self-quarantine after they were told that they were in close proximity to someone who tested positive for COVID-19, they announced at an online town hall meeting Thursday.

As of Thursday night there are 558 positive COVID-19 cases on Navajo.

Starting tomorrow the Navajo Nation will be under a 57-hour curfew starting at 8 pm and ending Monday morning at 5 am. This does not pertain to essential employees, who are required to have documentation from their employer. Navajo Police will strictly enforce the curfew order by issuing citations that may include a fine up to $1,000 and/or 30 days in jail.

On Tuesday, Nez and Vice President Myron Lizer were out in Tuba City and Kayenta. They along with the U.S. Army Corps of Engineers and Arizona National Guard assessed several possible sites for a federal medical station to help with patient overflow from local health care facilities due to the spread of COVID-19.

As they toured the facilities they wore their protective gloves and masks and later that evening they were informed a person who had tested positive for COVID-19 had interacted with them. Since then both Nez and Lizer have been in quarantine.

“You never know who is positive,” said Nez during the town hall. “We were out doing a tour… and we were wearing our face masks and gloves, taking every precaution. We were told we in close proximity to a person who tested positive for COVID-19 virus. Two days now I’ve been isolated into my room to be on the safe side.”

The positive COVID-19 case was a first responder. Since the beginning of the pandemic hitting Navajo, first responders have been placed in charge from taking supplies to Chilchinbeto to enforcing containment for the rest of the Navajo Nation.

When Chilchinbeto was considered a hot zone before the virus ran rampant in Western Navajo, firefighters were tasked with taking food and needed supplies into the community. Police officers have been arduously conducting checkpoints and working to uphold executive orders such as the 8 p.m. to 5 a.m. curfew, no mass gatherings, stay-at-home, no tourists and visitors. Not to mention the doctors and nurses who have been overwhelmed with the number of COVID-19 patients they’ve been receiving for the past three weeks.

As he spoke from his room Nez mentioned the incident in Page, Arizona when a Caucasian man, Daniel Franzer, was arrested and taken into custody on suspicion of attempting to incite an act of terrorism after he posted on his Facebook “to kill these Navajo” who are “100% infected” with COVID-19.

“There was a story out there in Page about an individual who wanted to take out all Navajos because he thought we were all carriers,” said Nez. “The guy was charged with a felony. Don’t even try to bring in racism or discrimination. It works both ways. Even us as Navajos, let’s not discriminate against our non-Navajo brothers and sisters.”

Nez himself later became a target, with a person posting on Facebook, “I hope Jonathan Nez does have covid19 and dies from it that stupid s.o.b.”