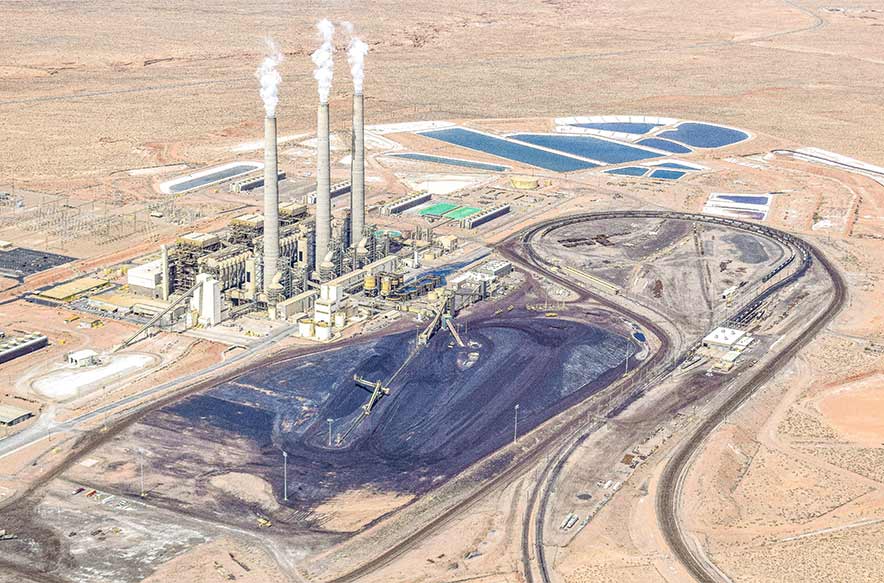 Special to the Times | Krista Allen
The Navajo Generating Station was officially shut down on Monday after 45 years of service.

The Navajo Generating Station permanently shut down its three 800-megawatt electric generating units after it burned the last of its coal on Monday, leaving a 45-year legacy of producing power.

The plant officially went offline at 12:09 p.m. after Fred Larson, a shift supervisor, opened the Unit 2 breakers, said NGS spokesman George Hardeen, who was in the control room all morning on Nov. 18.

“Rather than sad, the guys in the control room kept the mood high,” Hardeen told the Navajo Times Monday afternoon. “They turned a bad situation into a good situation. And they even told jokes.”

The units were expected to completely shut down last week around Thursday, but it took longer than expected. Instead, Unit 1 (north, near the railway loop) went back online after it went offline last weekend.

“Boiler will have no more fire to steam the water to turn the turbines and the electricity will (finish) being produced from Unit 1,” explained Harold Bennally, a former train specialist, whose last day of work at the plant was on Nov. 7.

Unit 2 (middle unit) was the last one online on Monday. Unit 3 (south, near State Route 98) switched off in September.

“But the coal kept coming,” Hardeen said, adding that Unit 3 was expected to go offline several times on Monday morning. “The (control room) was a room full of pros and (the environment) wasn’t somber.”

“The behemoth dragline which removed millions of tons of coal has been shuttered for months,” Jones wrote in a statement, adding that the Three Sisters will never go back online, leaving an eerie presence. “The clatter of (the Black Mesa and Lake Powell) rail cars rolling along the track has been inaudible for weeks. The hum of the belts carrying black fuel to the fire are noiseless. The drone and thumping of the (pulverized coal) can no longer be heard or felt.”

SRP CEO and General Manager Mike Hummel said in a statement that the 2,250-megawatt power plant will always be remembered as a coal-fired workhorse which employees made one of the safest and most reliable power plants in the nation.

“After more than 40 years of generating electricity for millions across the west, NGS and its employees are one reason why this region, the state of Arizona and the Phoenix metropolitan area have been able to grow and thrive,” Hummel said.

President Jonathan Nez said the Navajo Nation is prepared for the closure.

“So, we’re in the process of transitioning and we’ve been talking about decommissioning,” Nez said in an interview. “And a lot of the discussions (are) about what we’re going to do with the lands there. The other is what assets are going to be retained by the Nation.”

Nez continued, “The staff are out there … just checking on the assets to see which are still OK for future use. Those that are just too old, we’ll probably want to take that off.”

Hummel said closing NGS was a difficult but necessary decision based on the changing economics of the energy industry that has seen natural gas prices sink to record lows along with the growth of economical renewable resources, providing cheaper alternatives to coal.

The focus at the plant will now shift to decommissioning activities, according to Hummel. Under a 35-year extension lease, the NGS owners will make lease payments totaling about $110 million to the Nation that will allow continued access to the site for decommissioning, long-term monitoring, and ongoing operation of the transmission system.

The story of NGS

The story of the Navajo Generating Station is a key piece in Salt River Project’s history that is both complex and captivating, according to the SRP media team. Its 45-year history involves not only SRP but also the Navajo Nation, the federal government, and utility owners Arizona Public Service Co., Tucson Electric Power Co., and NV Energy.

It was a bustling time in the Southwest in the 1960s, during which the then growing city of Phoenix needed reliable sources of water and power. The city gained a development opportunity when the Colorado River Basin Project Act was enacted in 1968, which allowed tooh from the Colorado River to be taken to the Valley under the Central Arizona Project.

The project, a 336-mile system, would deliver the state’s single largest renewable water supply and to serve the state’s population. The project included constructing an electrical generation source to power the pumping station that would move the water across the state.

The project called for hydroelectric dams within the Grand Canyon. But public outcry forced then-Interior Secretary Stewart Udall to come up with another plan. After more discussions, a final plan was made for a thermal generating station and then Udall announced SRP would be coordinating and operating the new plant.

“Several factors were taken into consideration in siting this new coal-fired station, including proximity to a coal and water source, as well as access to a nearby town for employees,” reads a feature printed in a special edition magazine available only to SRP employees. “The Page area checked all of the boxes. High-quality coal was some 78 miles away on (Dzi?yíjiin) and Lake Powell provided a nearby water supply.”

Legislation that would authorize a lease with six utilities, including the Department of Water and Power of the City of Los Angeles and San Diego Gas and Electric Company, went before the Navajo Nation Council on May 27, 1969. The legislation was signed and approved that day by a vote of 46-0.

The lease for the plant site also provided economic advantages to the Navajo Nation and the influx of workers would help grow the Page-Lake Powell area when the Glen Canyon Dam (Dá’deest?’in Hótsaa) was built.

Bechtel Corporation began constructing the plant in April 1970 as the Black Mesa and Lake Powell Railroad was being constructed by Morrison-Knudsen to carry coal from Peabody’s Kayenta Mine to the plant. The railroad was the first 50,000-volt electric train in the world, eliminating the need for substations along the route, according to archives at the Powell Museum in Page.

SRP is now fulfilling its commitments to the Nation and the plant as decommissioning is now underway.

The NGS closure is the largest and most complex power plant decommissioning ever undertaken by SRP, according to the company. A team of SRP employees and representatives from the tribe have formed a group called “Joint Consultation Group” to ensure a successful decommissioning.

SRP is now working with several contractors to plan and execute the project: demolition of the units (power block), removal of the catenary electrical system that powered the train and addressing site cleanup and restoration.

SRP has five years to decommission the plant. It is expected to take three years to complete all major activities.

Daniel Wilson, engineer at SRP in Tempe, Arizona, said Independence Excavating from Ohio will be working on the power block. This work will begin in January and continue through 2021. The work also includes shutting down, decontaminating, draining fluids and bulk chemicals, torch cutting, imploding and demolishing the power block and related structures, including cooling towers, coal conveyance facilities, limestone crushing facilities, and other support facilities.

“And then National (Salvage and Service Corporation) will be removing the catenary system on the railroad,” Wilson recently told the Navajo Times. “So, the railroad’s going to remain for the Navajo Nation, but the catenary, which is the wires and the poles––basically the electrical components, that’s going to be removed.”

National’s work has begun, and it will continue through fall 2020. National will be removing more than 2,500 catenary poles, electrical wires, supports, brackets and support poles along 81 miles of railroad tracks. The railroad, as part of the NGS extension lease, will remain on the ground.

“We’re also going to have one to two civil contractors that will be awarded at a later date and we’ll be having another job fair probably in a couple of months with them,” Wilson said, “and there will be a lot of jobs associated with that as well.”