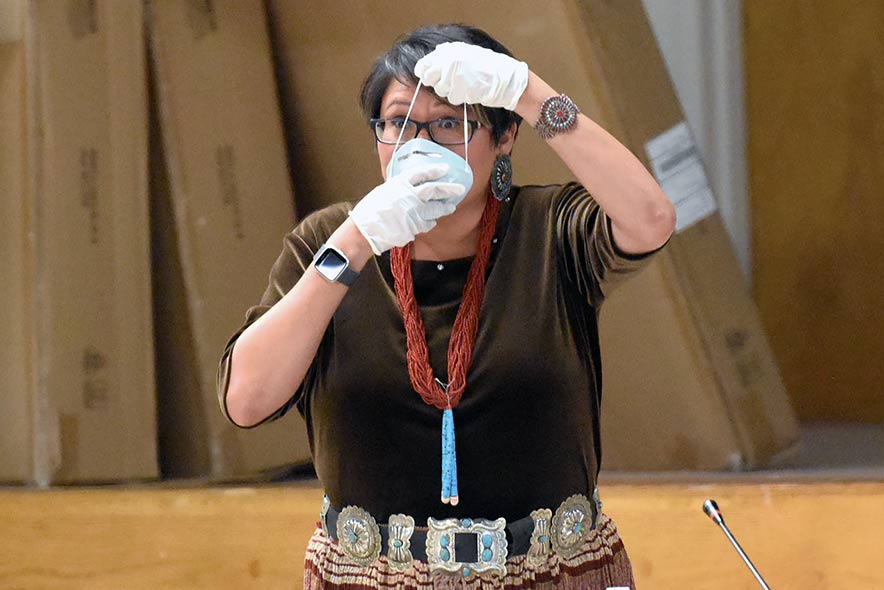 Former President Jonathan Nez made it mandatory in April 2020 to reduce the number of infections and deaths.

At the end of his ninth full day in office, Nygren announced mask-wearing was no longer mandatory in the Nation, saying it was time for the Diné to get back to work and open the chapter houses for business.

The new public health emergency order applies to public spaces across the 110 chapters, leaving the mask mandate optional for the public and businesses with four exceptions. However, the Nation’s indoor mask mandate will continue to apply to early childhood education, primary and secondary schools, nursing homes, healthcare facilities, and those with COVID-19 symptoms. The order also applies to those who test positive and are exposed to Covid.

Former Speaker Pro Tem Otto Tso, who represents Tónaneesdizí, said that with the executive order lifted, he wants to ensure the Diné and the welfare of communities, families, and elders are a top priority.

“As we move forward, our Nation’s safety will lie directly in our hands, a responsibility that should not be taken lightly,” Tso said.

Nygren said after 1,007 days of mask-wearing in the Nation, the tribe is one of the last jurisdictions in the country to lift the mandate, which the Navajo Department of Health mandated under Nez’s administration.

After Nygren’s announcement, Nez responded on social media, saying the Diné should ask the Nygren-Montoya Administration for comprehensive data to support its decision to lift the mandate and wondered whether the move was based on politics or public health.

The fast-spreading Omicron XBB. 1.5 makes up more than 40% of new COVID-19 cases across the country, putting it on track to become the dominant subvariant in the country, according to the Centers for Disease Control and Prevention.

The subvariant is an offshoot of XBB, a combination of two other Omicron subvariants. But right now, it’s most prominent in the northeast. Though, XBB. 1.5 doesn’t appear to be any more dangerous than its predecessors, according to TGen North in Flagstaff.

The Department of Health reported Thursday 81 new cases from Jan. 12-18. The agency reported 80,539 cases since the start of the pandemic. And there have been 2,009 confirmed deaths because of Covid. Since Nov. 2, the number of Covid cases has been declining, NDOH reports. As of Jan. 18, only five new cases were reported.

Council Delegate Shaandiin P. Parrish, the 2019-2021 Naabeehó Bich’eekį, who represents Chilchinbeto, Dennehotso, and Kayenta, said the members of the 25th Navajo Nation Council were not advised of the order lifting mask mandates nor were they given notification that a joint press release would be issued.

Parrish said she and other delegates learned of the order through social media.

“Today (Jan. 24), during (Nygren’s) State of the (Navajo) Nation (address), a lot of my questions were geared toward asking the president the process that was used in order to decide on that,” Parrish said in an interview with the Navajo Times Jan. 24. “My questions were really for my communities––Chilchinbeto, which was greatly affected by this virus. It is, in fact, the chapter that’s been dealing with this the longest.

“One of the last questions I asked (Nygren) him was how does this mask mandate lift the executive order––how does it affect chapter house activity because some of the chapters across the Nation are condemned,” she said. “They’re not big enough to hold 25 people in a room to make quorum.”

Parrish added that while the administration is new, healthcare leaders must be at the table when making such decisions because she believes it’s prudent.

“We understand that the rest of the country and the world is opening up, but a lot of them are closing back down because of the new variants,” she said. “A lot of data supports that.”

Nationally, the CDC reports the number of new Covid cases on the decline, with more than 101 million total cases. More than 50.6 million people in the U.S. have received Covid booster doses.