Page mayor: Lake Powell is not drying up 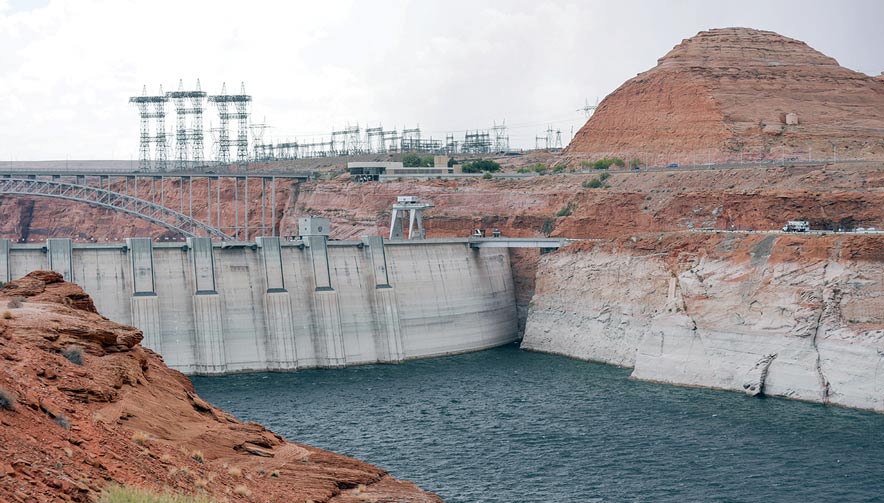 The reservoir created by Glen Canyon Dam is sinking to its lowest level ever because of extreme drought.

And climate change is making it worse.

The signs of drought are noticeable at Lake Powell. Rocks that were once underwater now appear on the lake’s surface.

A thick, white band of exposed rock face marks where the reservoir once reached. And the embankments stretch high above recreationists.

But this doesn’t mean the lake is closed, said Page Mayor Bill Diak.

“Looking at the water levels and the way they were receding, I knew at that time we were going to be in some critical situations with access,” Diak said.

Lake Powell has 11 launch ramps. Six are partially open and one, the Antelope Point Valet Launch Ramp at Jádí Tó, is fully functional.

Maintaining access at Wahweap Bay, the busiest visitor area, is crucial for Page.

Diak said there’s still water in Lake Powell but it’s getting harder to access it.

“The lake still has a lot of water in it,” he said. “It’s not empty. Although some people put information out there that ‘Lake Powell is drying up.’ Well, it’s not.

“Climate change is certainly impacting us, along with a 20-year-long drought,” Diak said. “That’s why … it shouldn’t be a surprise to anybody and that maybe we should have been a little more proactive in more recent years.”

Lake Powell’s water elevation will likely continue to decline until next year’s spring runoff into the Colorado River begins, according to the U.S. Bureau of Reclamation.

If the water level keeps dropping, it will reach what experts call “dead pool,” meaning there is no longer enough water for it to flow through the Glen Canyon Dam’s gates or generate the hydropower that the West’s electricity grid depends on.

The flow of the Colorado River has dropped so rapidly that in 2002 Lake Powell received only one-quarter of its average inflow. In early 2005, the reservoir was only one-third full.

Had the water level continue to drop, power production at the dam would have ended in 2007.

The next year, the water level would have fallen to the dam’s outlet works of 3,374 feet.

Denver, Las Vegas, Phoenix, Tucson, Los Angeles, San Diego and Albuquerque all depend on it.

“There’s a lot of factors involved with the low water level in Lake Powell,” Diak said. “Certainly, the drought is one of them. Secondly, we’re a growing nation and we continue to have a need for additional water.

“And we’re probably not the best stewards of the use of our water also,” he said.

Water isn’t an infinite product. Diak said this means that people can do a better job at conserving water where they can, especially in the Southwest where water is critical.

“We have over allocated, and we don’t really know how much water is going where, any longer with that,” Diak said. “People keep upping their usage of their allocation. That puts us in a critical situation.”

Most water arrives in winter storms, which move in from the Pacific and dump snow atop the region’s mountain ranges. Most years the Colorado River never reaches its mouth in the Gulf of California.

Recent studies point to warmer and drier conditions ahead, with reduced runoff into the river that irrigates more than 5 million acres of farmland, much of which would otherwise be desert; powers electric grids; and provides drinking water on its way to Mexico and the Gulf of California.

“Our situation with the lake, that’s a global picture,” Diak said. “On a local standpoint, our Southwest region here, for us economically, is dependent on a few things.”

Diak said the city of Page not only depends on Lake Powell but also the Glen Canyon National Recreation Area, the canyons such as Horseshoe Bend and Tsé’ésdooltas in Łichíi’ii, and Utah’s “The Mighty 5” national parks – Arches, Bryce Canyon, Canyonlands, Capitol Reef and Zion.

“The lake last year basically carried us because of COVID and everything else being shut down,” Diak said. “The lake being somewhere you could social distance. The lake really got us over the hump because it was so popular.”

But Lake Powell alone did not meet the needs that the city of Page suffered, especially after the Navajo Generating Station and the Kayenta Mine shut down.

The reasons are two things: the loss of NGS, along with 2,300 jobs, and the coronavirus pandemic.

“On top of that, the lack of access to the water is problematic,” Diak said. “Even though visitation is high, I think we’re very, very feeling the crowdedness out there.

“When you take the ability to have three ramps in our region – Wahweap, Stateline, and Antelope Point – and you limit that to one ramp, and from time to time, access on that is sketchy, it’s problematic for the region,” Diak explained.

“When I look at our economy and the loss of revenues,” he said, “I attribute that to loss of jobs and loss of income to families.

“And that’s more important to any other individual need,” Diak said. “I wish we could have all those jobs back that we’ve lost. I think in time, we will but it will be in a different fashion.

“Page is not going to be the one that resolves that,” he said. “We’re certainly going to be players and speak up about it.”

To prop up Lake Powell’s water level, reservoirs in the Upper Basin will release extra water to ensure a safe level is maintained in lakes Powell and Mead.

The goal of the releases is to preserve the ability to make hydropower at Glen Canyon Dam, according to the Bureau of Reclamation.

The 181,000 acre-feet from the three upstream reservoirs is expected to boost Powell’s water level by about 3 feet.

“We’re using more hydro right now to produce electricity, partly because you take a generating station that we recently closed … and you turn it off and you don’t have another source ready to turn on,” Diak said. “That’s why we’re using more, in a drought situation, hydroelectric power.”

Diak said the city of Page however is more in tune with what effects the local area.

“It’s strange,” he said. “You take the East Coast and the West Coast, and you have plenty of water in the east – of course, the arid Southwest and West, you don’t,” Diak said.

“Instead of flooding all those people in the east every spring,” he said, “if we had some way of storing that water and moving it by pipeline, that might help.”