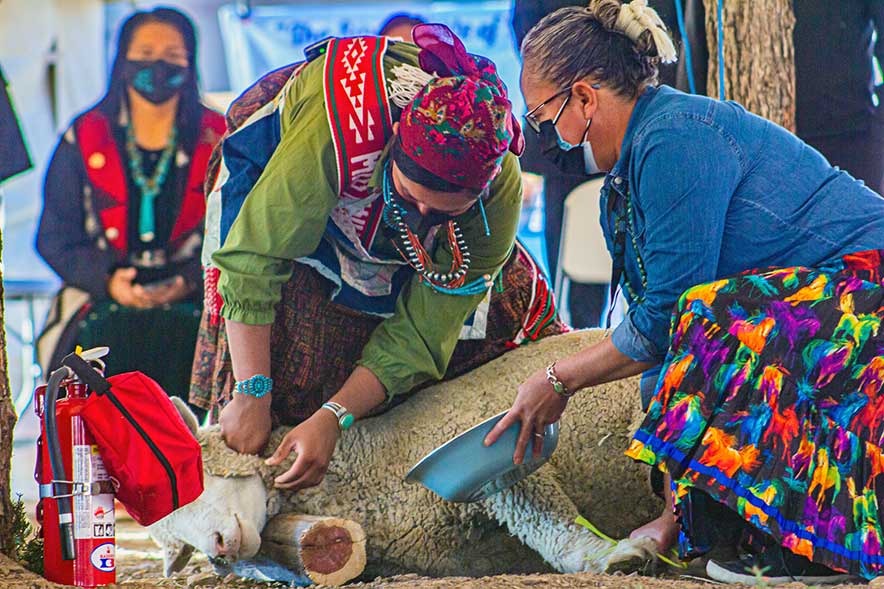 Navajo Times | Cyrus Norcross
Miss Navajo contestant Shandiin Yazzie prepares to cut the sheep's throat on Sept 6. Yazzie has wanted to be Miss Navajo Nation since she was a girl.

Dressed in traditional wear, with plastic wrapped around their moccasins and wearing aprons on to prevent any blood from getting on them, Miss Navajo Nation contestants gathered under a tent early Monday morning, preparing their butchering stations for the competition to come.

After a two-year wait due to COVID-19, the popular sheep-butchering competition kicked off the 69th Annual Miss Navajo Nation Pageant on Monday.

Miss Navajo Nation Shaandiin Parrish said that the sheep butchering is her favorite part of the pageant because of how empowering it is for the contestants.

“It is maybe the most difficult part of the week and once you complete this part of the contest, you feel empowered that you can continue the week,” Parrish said. “So I hope the girls take today as an experience that they’ll remember for the rest of their lives.”

She also encouraged the audience to learn something new from the butchering competition and to carry on those teachings to Navajo youth.

The competition is separated into three categories, each assigned an allotted time. The first category is a one-hour general butchering of the sheep, followed by a 30-minute intestine cleaning, and finally a 20-minute meat cutting.

“I feel like today’s going to go pretty well,” Rockbridge said before the competition. “I think we’re all prepared and excited to get the pageant week started, especially this being the first competition and this is like the main event.”

Rockbridge’s guesses were right. With her volunteer, she had her sheep hung up and ready to be gutted in the first 31 minutes.

Once hung up, she finished fully gutting and dismembering the sheep within 50 minutes, making her the first to be done.

Yazzie and Ironshell did not fully finish gutting and dismembering their sheep within the one-hour time limit. Volunteers helped them finish before the intestine cleaning portion of the competition.

Yazzie cut herself deeply in her finger within the first five minutes of the competition.

She immediately called out for a medic. The wound was cleaned then bandaged and she was granted an additional volunteer since her abilities were limited, on top of the one she was already provided. 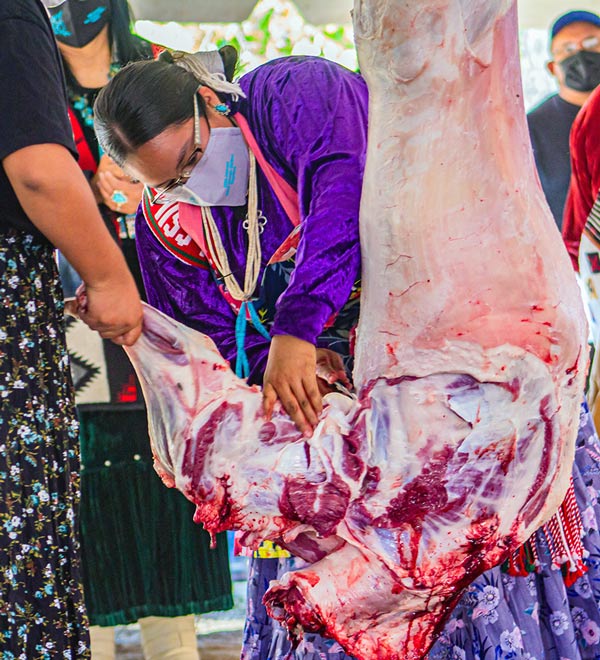 “It was a deep cut and it needed to get stitches and they asked if I was ready to go to the hospital and I said no, I’m going to tough it out.” Yazzie said. “It was kind of hard just using one arm because I had to wear a glove and it kept slipping.”

While this was happening, the contestants were asked questions by judges in the Navajo language that centered on traditional and cultural teachings of sheep butchering. They were expected to answer the questions correctly in Navajo.

Much like before, Rockbridge was the first one done with the intestine cleaning portion. Yazzie and Ironshell did not make it within the allotted time and volunteers helped them finish before the meat cutting.

Both Rockbridge and Yazzie said that they had butchered sheep countless times throughout their lives prior to the competition.

“I can’t keep track of that (number of times she has butchered) because I usually help at ceremonies, they usually butcher during that time, and just for my family in general,” Rockbridge said.

However, Yazzie said butchering is a lot of work and people probably do not know how much help they have.

“I’ve been butchering since I was little,” Yazzie said. “It’s just funny how you don’t realize how much help you probably have.

“The people who were helping me butcher don’t know how to butcher,” she said. “They were like, ‘I think that’s how you do it?’

“The girl that really helped me, April, she’s really knowledgeable,” Yazzie said. “I was thankful for her help as well as the judges because it was hard trying to use one hand.”

Unlike her fellow contestants, Iron Shell said she had only butchered six sheep prior to the competition within the last month to prepare.

“You have to live with sheep, your family has to know how to butcher,” Iron Shell said. “My grandmother knew how to butcher, and we didn’t always butcher. Today wasn’t really my day with butchering. It was really hard, but I got through it, and it was fun.”

Rockbridge and Yazzie had similar sentiments and said the competition went well and they had fun while doing it.

The pageant continues virtually throughout the week with judges tallying up points as the days go.

The contest started up again on Wednesday with a business interview at 9 a.m. and a traditional knowledge interview at 1 p.m.

The week ends on Saturday with the 69th Annual Miss Navajo Nation coronation where the winner of the pageant will be announced.

There is no in-person viewing of the events due to COVID-19 restrictions. The contest will be livestreamed through Facebook and YouTube.