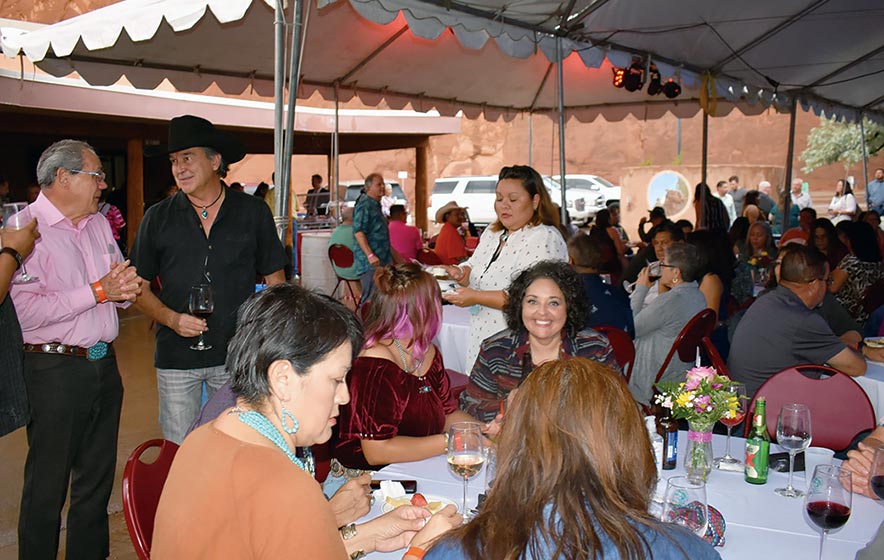 Navajo Times | Rima Krisst
Gallup Mayor Louie Bonaguidi, left, makes the rounds catching up with with people at the "Gallup's night out" wine gala on Aug. 10 at Red Rock Park.

The outdoor event sold out and was packed to the gills with over 500 revelers who dressed up for the milestone centennial celebration.

“The local community has come out in support of the local association,” said the event’s volunteer coordinator, Dudley Byerley. “They’re coming out in droves.”

“We’re traditional and the tradition carries on,” said Byerley “It’s a big deal.”

After the prior week’s incident at the Ceremonial night parade, where an alleged intoxicated driver drove through the parade route injuring 15 people, approximately 30 New Mexico State Police officers were deployed to keep watch over the rest of the Ceremonial events.

At the gala, some of the officers could be seen casually strolling around amongst the wine and art lovers.

“They’re around and they’re reassuring the public that they’re safe,” said Ceremonial Board president and rodeo coordinator Kyle Tom.

“What happened was a freak accident,” he said. “We’re going to go on through this 100th and have the best Ceremonial ever.”

The party, which featured a cornucopia of hors d’oeuvres, wine, live music and door prizes, was one of the first large social gatherings in Gallup in after two years of restrictions due to COVID-19.

At one point, the crowd was blessed with drenching monsoon downpour that partygoers gleefully took in stride.

“Being at the gala is my favorite part because that means we’re ready to roll,” said Tom.

“It all pays off tonight,” he said. “We’ve got an amazing community that’s helped us sell out this wine gala for the first time ever. They’re here to have a good time, to see the art.”

A seemingly relieved Gallup Mayor Louie Bonaguidi said he was encouraged to see the large turnout for the event after the terrifying night parade ordeal less than a week prior.

“What we’ve been through in the past week, it bothered me,” said Bonaguidi.

“I thought it might put a damper on the whole event, but tonight basically proves that there’s still an interest in Ceremonial, not only for the community, but we’ve got people coming here from all over the world,” he said. “It warms my heart, for sure.”

Tom said even events over the prior weekend, including rodeo and traditional song and dance, were well-attended.

“All of the elders were having a good time, dressed up, dancing,” said Tom. “And they were pulling their kids and their grandkids out on the dance floor.”

Tom said that the mix of youth and elders and everyone in-between intermingling and having fun is a hallmark of Ceremonial.

“It really speaks to who we are and what we’re all about and that’s presenting traditional authentic culture and heritage for the world,” he said.