Navajo Nation Police have begun re-educating the public about why the reservation is on a 56-hour curfew as they stopped dozens of drivers on Saturday morning.

Police stopped drivers heading east on State Highway 264 during a two-hour checkpoint, reminding them there is a curfew in effect on the reservation.

“Basically, we’re trying to get the information out to the public,” Toddy said. “The virus is peaking again, and we need to settle everybody back down.”

Toddy’s assessment seems to corroborate with official data that tracks COVID-19 infections and deaths, including the Centers for Disease Control and Prevention.

The number of cases, including deaths, in Arizona, New Mexico and Utah are on the rise, according to the CDC.

As of Wednesday, the Arizona Department of Health Services reported 242,480 cases statewide. The three counties that include the Navajo Nation – Coconino, Navajo and Apache – have a total of 15,618 cases.

The New Mexico Department of Health reported 43,826 statewide cases on Wednesday. The three main counties – McKinley, San Juan and Cibola – that include the reservation have a total of 8,921 cases. 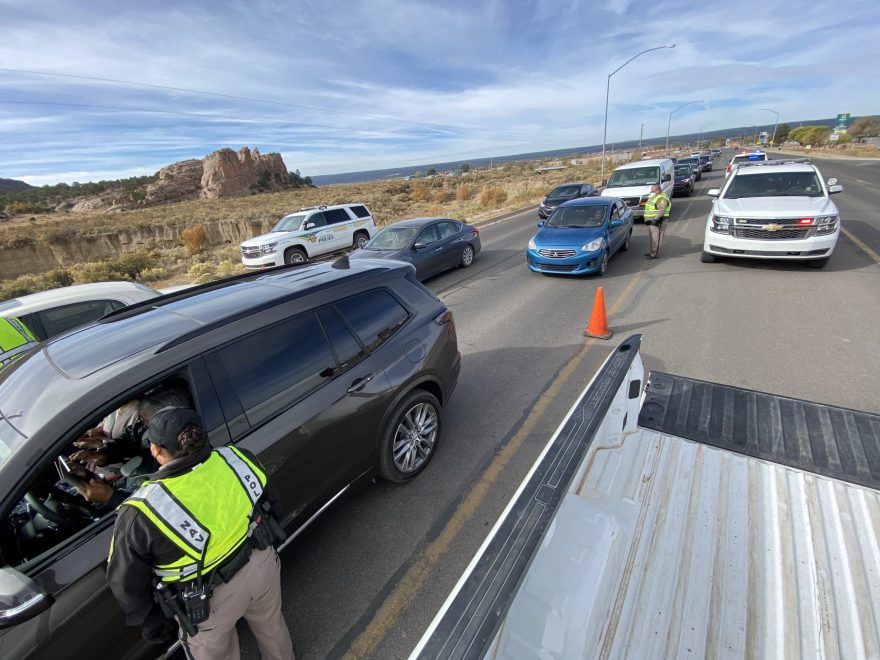 The tribe reported no deaths for six days until Tuesday, when it reported one death, bringing the total to 575 as of Wednesday morning.

Since Oct. 23, the Navajo Nation Department of Health added 226 new cases. As of Wednesday evening, the department reported 11,462 cases on the reservation.

On Oct. 19, Navajo Area IHS spokesperson Genevieve Notah said intensive care beds were at 71% occupancy, while overall occupancy was at 38%.

The New Mexico Department of Health on Friday reported 78 percent of general beds at hospitals were occupied, and 79% of ICU beds were occupied. Hospital bed occupancy included patients hospitalized for COVID-19 and other illnesses, NMDOH added.

As of Oct. 18, the average positivity rate in the Navajo Area IHS was at 5.1%, the third lowest rate among the 12 IHS areas, said Notah.

Pandemic fatigue, family gatherings, and traveling to hotspots are why the numbers are on the rise again, President Jonathan Nez said on Tuesday.

“If you look at the factors, they are all within our control,” Nez said. “We have 575 families that are grieving for the loss of loved ones because of COVID-19.”

The CDC reported in July that “fear and anxiety” could be “overwhelming and cause strong emotions.”

“Public health actions, such as social distancing, can make people feel isolated and lonely and can increase stress and anxiety,” the CDC stated.

Pandemic stresses can cause a number of anxieties like sleep pattern changes, difficulty sleeping, worsening chronic health and mental problems, and increased alcohol and tobacco usage.

Despite having fears and anxieties, one Navajo resident, who didn’t want to give his name, said refilling his propane tank, getting food to eat, having to work 40 hours a week, and hauling wood and water worry him constantly.

He added the curfews create even more stress because of the limited time it gives him to take care of necessities.

“That bothers me,” he said. “My anxiety level is high. I really don’t like to travel much because the surges are high again. That’s one thing that’s always on my mind.”

He added that despite his worries, he does not have a choice but to refill his propane during the weekend lockdown. He suggested the curfew hours be reduced to give working Navajos a chance to take care of essential business.

“It’s harder because some of us work and we don’t have time to take care of things,” he said. “Other than that, the lockdown is good. I ran out of propane and I have to get more.”

Toddy said during the curfew checkpoint, he observed one woman “having trouble breathing and coughing.”

“She said got seen over at Tsé Hootsooi Medical Center in Fort Defiance and she said she’s heading to Rehoboth McKinley Christian Hospital in Gallup to be seen,” he said. “She said she couldn’t breathe.”

The NMDOH said anyone experiencing COVID-19 symptoms, such as fever, cough, shortness of breath, chills, shaking, muscle pain, headache, sore throat, congestion or runny nose, nausea or vomiting, diarrhea, and/or loss of taste or smell should call their health care provider or the NMDOH COVID-19 hotline immediately at 855-600-3453, or their local health-care provider.

A statement from the president’s office said another 56-hour weekend lockdown begins on Friday at 9 p.m. and ends on Monday morning at 5 a.m.

Vice President Myron Lizer on Wednesday said, “We know many families want to gather in-person for the holidays, but that is not in the best interest of our health during this pandemic,” referring to upcoming holidays and Halloween on Saturday.