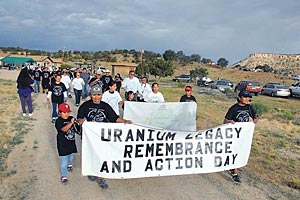 A resident of Red Water Pond Road, the Church Rock, N.M. neighborhood perhaps most affected by the legacy of uranium mining, was among 10 to 15 people testifying about the right to clean water Friday at a hearing of the Inter-American Commission on Human Rights in Washington, D.C.

With only five minutes allotted per speaker, Edith Hood managed to give the commissioners a brief history of uranium mining in Church Rock, and how the people there, many of whom worked in the mines, did not know the health effects of radiation until years later.

“As children, we played in the tailings piles,” Hood told the commission, adding that their sheep drank from pools at the mines and some people built their homes out of rocks that came out of the mines.

Hood told the commission, “We face an impossible choice: to stay where we are, or to relocate and give up our drinking water.”

“The government is offering to build us houses in our customary use area about three miles away, upwind and upstream of the uranium,” she said. “But there’s no infrastructure there. Where we are we have water, communication, telephones – but we live in a contaminated area. Still, it’s hard to give that all up.”

Keyanna said they’ve been told there’s no money for infrastructure, but the alternative is to put all 35 to 45 members of Red Water Pond community up in hotels for seven to nine years while they remediate their existing homes – plus pay them a meal stipend since some of the hotel rooms do not have kitchenettes.

“If they can afford to do that, it seems like it would be cheaper to build us some infrastructure,” she said.

Hood was just one of 10 to 15 people who testified at the hearing from all over the U.S. and Latin America.