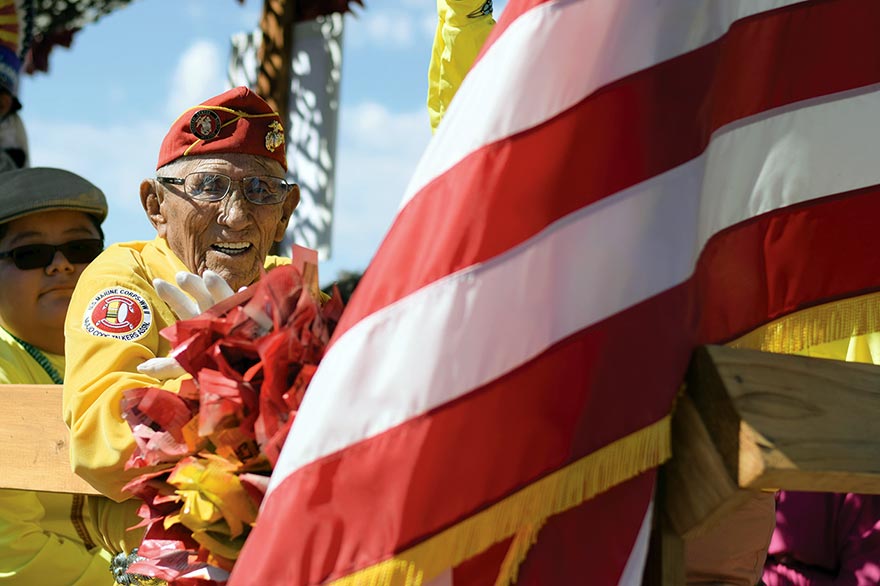 Select the images to launch a full-screen slideshow of Code Talker Day. 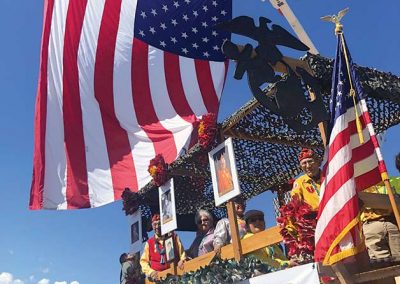 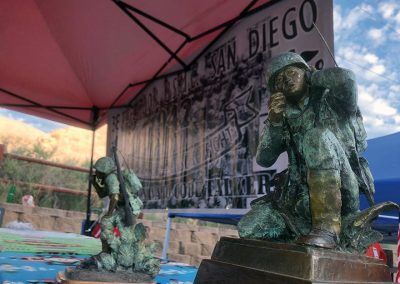 Navajo Times | Donovan Quintero
A statute of a Navajo Code Talker, sculpted by Oreland C. Joe, is displayed at Zonnie Gorman’s booth on Navajo Code Talker Day in Window Rock. Gorman’s father, the late Carl N. Gorman, was one of the “Original 29” and helped create the first Navajo codes. 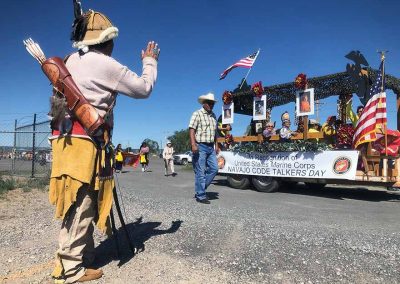 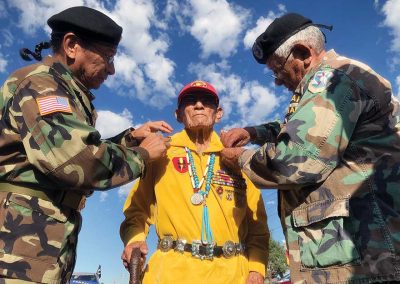 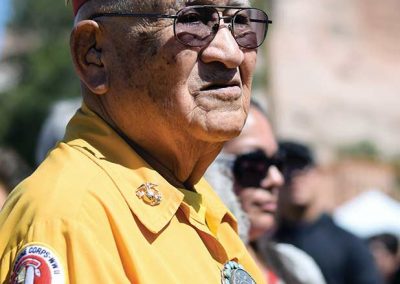 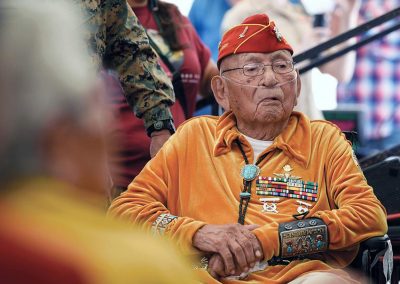 The five remaining Diné men who lied about their ages to enlist in the U.S. Marine Corps and help save the U.S. from tyranny after the bombing of Pearl Harbor are being honored this week — Navajo Code Talker Week.

Over 400 men would eventually become part of the top-secret program called the Navajo Code Talkers. Most of the men were shipped straight to the battlefields all over the Pacific once they completed the training.

One of the greatest triumphs for the code talkers was in Iwo Jima. There, six Navajo men relayed and transmitted over 800 messages, around the clock, without any error. “Were it not for the Navajos, the Marines would never have taken Iwo Jima,” said Major Howard Connor, 5th Marine Signal Officer.

Navajo Code Talker Joe Vandever Sr.’s daughter, Shelia Nez, said her father fought in several campaigns in 1943 before being honorably discharged in 1946. “He enlisted at the age of 19 when he was asked to serve his country,” she said on Tuesday of the great-great-grandfather of two. “Without hesitating, he accepted.”

Vandever was shipped out to Marine boot camp in San Diego. After he finished there, he was sent to Camp Pendleton where he began his training as a code talker. After he completed his training, he was shipped out and went straight into battle. Nez said her father saw action in the Solomon Islands, Bougainville, Emirau Islands, Guam, Ryukyus Islands, the occupation of Japan and the occupation of China.

While in Guam, she said her father said he and the men felt they needed to rejuvenate after having fighting the Japanese military. “They felt they needed to rejuvenate themselves, cleanse themselves, and my dad decided to do a sweat lodge ceremony in Guam,” Nez said. “He wasn’t a medicine man but he knew how to do one,” she said. “They hurried up and started setting it up. He used banana leaves to make the sweat lodge and heated up some rocks.”

Not long after getting a much needed cleansing, Nez said her father saw a bird from home. That’s when he knew he was going to make it home. Vandever was discharged on Jan. 22, 1946, and returned to his home in Haystack, New Mexico, where he settled into an arranged marriage with his wife, Bessie.

He worked in the oilfield and as a chauffeur before retiring as a housekeeper at Gallup Indian Medical Center in 1986. These days, Nez said her parents, who recently celebrated their 73rd wedding anniversary, spend all of their time together at their home.

“They miss each other when they’re not together,” she said. “He has been enjoying his long life being at home and spends his days watching the sunrises and sunsets and looking at the mountains that surround him.”

John Kinsel Sr., from Lukachukai, Arizona, enlisted in Santa Fe after graduating from St. Catherine’s Mission School on Oct. 10, 1942. “I entered boot camp in the Marine Corps Recruit Depot in San Diego, California with 16 other Navajos trained in the code talker-communications specialist through the use of telephones,” he wrote in his memoir. “We had our code talker training at Camp Elliot with 20 men.”

After he completed the school, he said he was sent to New Zealand when he started using the code during their training sessions. Then in November of 1943, he wrote, his unit was sent to the Guadalcanal where they continued training in the jungle, with some occasional interruptions from Japanese bombers.

“There, we had the ‘Washing Machine Charlie,’ bombed us and gave us a bad time,” Kinsel wrote. “They were a lousy shot.” His first battle came in Bougainville, on Nov. 1, 1943, where he remembered having to cut his way through “thick jungle” and “knee deep high mud.” “We had to chop our way into the jungle growths,” he recollected in his memoir. “The enemy fired a lot of mortars and artillery shells on us. It seems that the artillery rounds hit the top of the jungle growths and threw a lot of branches and debris on our units.”

Seeing the body of a fellow Marine made him think of his own life.

“He was a very young individual with blond hair who must have been (a) recent replacement into our Unit,” he wrote. “My first impression of him was his mother, father, and other relatives and how they deal with his passing. It frightens me thinking will I be casualty like him?’”

What he saw in December of 1944 in Guam still devastates him to this day, he wrote. “One Marine stepped on a mine, which blew both of his legs and took one hand off. He asked me for a cigarette and said he still had one good hand for smoking. He took one puff and died the next moment,” he wrote. In Iwo Jima, Kinsel and his unit were hit by a mortar shell that blew part of a cliffside onto them.

Debris from the explosion buried half of the unit. He, too, was buried. His left ankle was broken from the explosion. He was pulled from from the rubble by a fellow Marine named John Rob Walker from Texas, who carried him to safety. He was discharged on Jan. 1, 1946, and returned home where he began another, perhaps tougher, battle: depression caused by his military experiences.

“For over 60 years, I suffered tremendously,” he wrote. After many years of battling his thoughts and nightmares, he was told by a counselor at the Chinle Veterans Center he was suffering from post-traumatic stress disorder, or PTSD. He added he hates the Fourth of July because the sound of fireworks reminds him of artillery.

Thomas H. Begay, originally from Chichiltah, New Mexico, loves to sing the Marine Corps Hymn in Navajo. The Navajo Code Talker makes his home in St. Michaels, Arizona, said his eldest son, Ronald C. Begay, who retired as a lieutenant colonel from the U.S. Army in 2004.

After completing code talker school, he was one of 33 Navajo Code Talkers to be assigned to the 5th Marine Division Signal Company and in the radio section of the H&S Company, 27th Marines. During the Battle of Iwo Jima in 1945, Begay and other code talkers transmitted hundreds of coded messages over the radio between Feb. 19 and March 27.

He was discharged on July 23, 1946, as a lance corporal. His son said after he returned home from the Marine Corps, his father went to work as a Navajo police officer. During his brief stint in law enforcement, Begay was stabbed in the leg while arresting an intoxicated person. He left the police force not long after the incident.

On July 22, 1947, Begay enlisted in the U.S. Army. He saw action in the Korean War with the 7th Infantry Division as a parachutist, glider-man, and survived the Chosin Reservoir Battle between November and December of 1950.

Three years later, in 1953, he was honorably discharged. For his service, Begay has been awarded the Presidential Unit Citation with three Bronze Stars, the Meritorious Unit Citation with the Korean Medal with five Bronze Stars, and in 2001, the Congressional Medal from U.S. President George W. Bush. He and his late wife, Nanabah Doris Yazzie-Begay, moved to Chinle, where he worked as the superintendent of the BIA’s Chinle Agency for 40 years before retiring in 1984.

During his retirement, Begay and his wife traveled the world and participated in many events, like the Navajo song and dance, until her passing in 2013. Begay continues to travel, speaking about his experiences as a Navajo Code Talker.

Samuel Sandoval, from Nageezi, New Mexico, was not the only code talker in his family.

His younger brother, the late Merril L. Sandoval, who died in February 2008, also became one of the famed warriors. Samuel, the eldest, joined the Marine Corps on March 26, 1943, and saw action as a code talker in the Solomon Islands, Bougainville, Guam, Marianas Islands, Peleliu Islands, Okinawa, Ryukyu Islands and the occupation of China.

He was the only Navajo Code Talker to participate in 1st Amphibious Corps landing on Agat Beach in Guam with the 3rd Marine Division. According to his military file, Sandoval was never injured during his time in the Marine Corps. He was discharged on Jan. 22, 1946. His younger brother, Merril, was denied entry because he was only 16.

According to an interview with the Veterans History Project, his father agreed to let him enlist when he turned 17. “At first, my father was reluctant to let me go since Sam already left. He finally agreed to let me join,” the Veterans History Project quoted him. “He told me, ‘Son if you really think this is the right thing for you to do, then I’ll sign the papers.’”

The brothers never served together during the war.

He took the Navajo communications and combat communications courses at Camp Pendleton after competing basic training, but he never had a chance to use code in combat operations.

He was discharged as a corporal. He went to the University of Oklahoma and got his bachelor’s in electrical engineering and started working at the Hughes Aircraft Company. He returned to the Navajo Nation and entered tribal politics where he served as a tribal chairman from 1970 to 1986. MacDonald, originally from Teec Nos Pos, Arizona, makes his home in Tuba City.