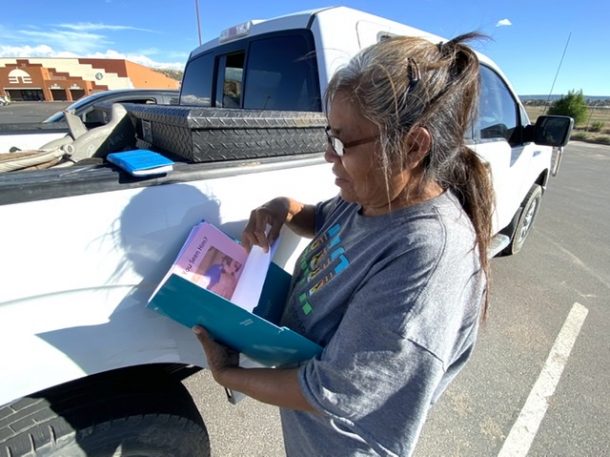 Navajo Times | Donovan Quintero Linda Jones from Standing Rock, New Mexico, looks through her folder filled with information about her missing son, TJ Yazzie, on Monday, who she said, has been missing since May 13, two days after Mother’s Day.

The family sat on the bed of their truck having a late meal at the Bashas parking lot on Monday afternoon.

The family of TJ Yazzie said they are trying to figure out how to get help with food and gas. They’ve been searching for Yazzie since he went missing two days after Mother’s Day.

“That’s when he left the house from Hunters Point (Arizona),” said his father, Edison Jones.

Yazzie’s mother, Louise, said they’ve been searching for TJ every day, from sunup to sundown. They searched the Summit today and red rocks south of Window Rock, she said.

“We have a lot of leads,” she said. “We searched over there, but there’s nothing. We come up empty handed.”

Louise said TJ lives with his aunt in Hunters Point while she and her husband live in Standing Rock, New Mexico.

Together, along with her family and her husband’s, they’d scrounged up just enough gas and food money for the search. They sleep in their truck to save fuel so that they can continue to search the next day.

Louise said the Navajo Police helped but stopped after 30 days. They were told one of the only options was if TJ was arrested and put in jail. 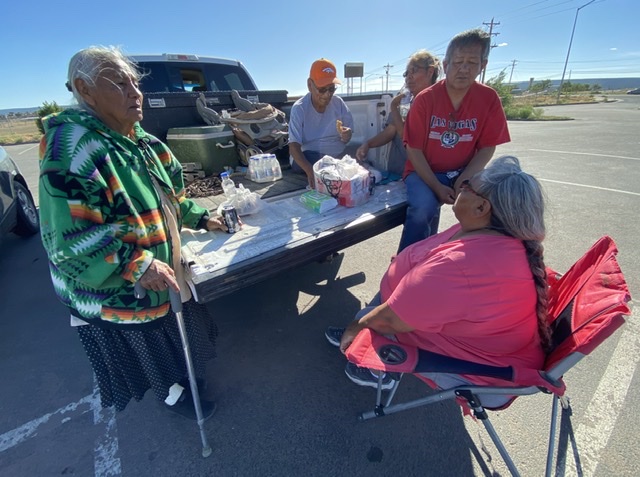 Navajo Times | Donovan Quintero
The family of TJ Yazzie, who’s been missing since May 13, have a late lunch in the Bashas parking lot on Monday after searching on the Summit and along the red rocks south of Window Rock.

On Monday afternoon, after another day of searching, TJ’s paternal aunt Janet Jake said the family was going to ask President Jonathan Nez for help.

“Maybe he can help and volunteer with us,” Jake said, “or maybe he could help us with donations.”

The family said they’ll search in Farmington on Tuesday because they got word a person matching his description was seen there.

Yazzie’s mother said her son has a tattoo of a chain on his left wrist, a burn scar on his upper left arm and a scar on the left side of his face. He is 5’11’ and weighs 165 pounds. He was last seen wearing a brown Carhartt jacket with Wrangler jeans and sneakers.