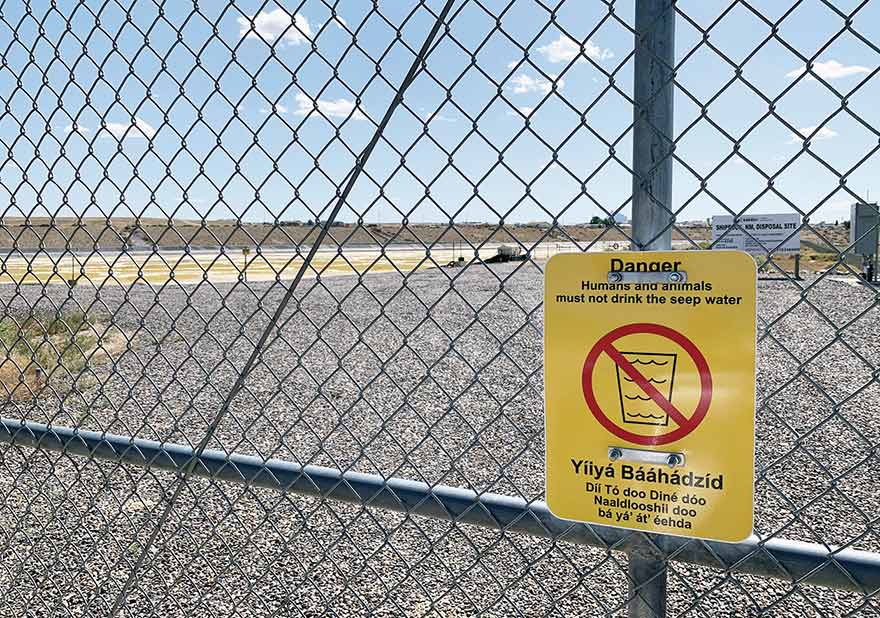 Navajo Times | Cindy Yurth
This evaporation pond has been removing uranium from an aquifer in Shiprock for 17 years, but it is coming to the end of its useful life and the U.S. Department of Energy held a scoping meeting last Thursday to get input from community members on whether they think it should be rehabilitated, removed or allowed to remain where it is.

With an evaporation pond used to purify uranium-laced groundwater coming to the end of its useful life, U.S. Department of Energy officials last Thursday offered this community three alternatives. They could remove the pond and take their chances with the groundwater; replace the pond liner and extend the pond’s life 20 to 30 years; or do nothing and take a chance that the pond liner, whose warranty expires in 2022, will keep working.

Community members gathered at the chapter house for the scoping meeting chose none of the above, saying it’s time the entire tailings pile from the old uranium mill site is removed, since that is the cause of uranium in the groundwater.

“Why are we only given three alternatives?” asked Joann Lameman, one of about 50 community members who attended last Thursday’s scoping meeting on the fate of the pond. “I think we should be given more alternatives. As Diné people we’re always subjected to the least amount of things.”

Several other residents added their voices to the chorus, bringing up the towns of Uravan, Colorado, and Moab, Utah, as places where tailings were hauled away. (While that is true in the case of Moab, Uravan was actually evacuated in 1986 and the entire town chopped up, buried in place and sealed with a cap of clay, a fate most people would probably not want for Shiprock.)

“I don’t want our grandkids to be sitting here 20 or 30 years from now, talking about this again,” said Shiprock’s Council delegate, Eugenia Charles-Newton, referring to the length of time that could be bought by rehabilitating the pond.

Mark Kautsky, site manager for the DOE’s Office of Legacy Management, said removing the tailings pile, which is currently buried under a liner and a layer of rip-rap, “can be done,” but “it requires Congress to fund that action.

“Until that happens, we do not have the authority as DOE to do that,” he said.

Some residents wanted DOE to lobby Congress for them, but Kautsky said that as an agency of the government, the DOE is not allowed to take a position on the cleanup. He did say that the pile is periodically monitored and that the liner appears to be keeping atmospheric radon and gamma radiation at background levels. The main concern is the uranium seeping into the groundwater, which the pond is addressing.

Josey Foo, who described herself as a “retired government lawyer,” warned the attendees that if they limited their comments to removing the tailings pile, they might not be considered as the scoping meeting was specifically on the pond. However, she chided the DOE for giving “bare bones” information about the three alternatives, making it difficult for the townsfolk to choose one or the other.

For instance, she said, the feds had not addressed the question of where the water will be diverted while the pond liner is being replaced, and how long each alternative will take. “The only impacts you’re talking about are traffic and employment,” she said. “There are many other impacts on the community.”

She advised community members to defer their comments until the next scoping meeting, Sept. 21, and ask the DOE questions in the meantime, as Kautsky had said the scoping meeting was to gather input rather than answer questions. The DOE officials did pass around a sample of the pond liner material, which most people who handled it found shockingly thin.

“I’m looking at this and I’m like, What is this? It’s thin! It doesn’t look like it would protect Mother Earth,” said Briana Lameman. The liner sits on top of a clay layer that also helps keep contaminants from entering the groundwater.

While some of the older people at the meeting said they worked at the mill or helped install the pond in 2002, a lot of the younger people were unaware the pond was even there. “I’ve been talking to people here, and a lot of them don’t know anything about this,” said Charles-Newton after the meeting. “I think we need a community meeting, just us, to learn about this issue and see if we can agree on a way forward before the next scoping meeting.”

The Shiprock uranium mill operated from 1954 to 1968, according to the packet handed out at the meeting. After it closed, “The mill was allowed to just sit there and dry up,” Kautsky explained, allowing the contaminants “to blow around.”

The site is right on the edge of town, behind the fairgrounds and the Navajo Engineering and Construction Authority’s supply yard, and one corner of it is just yards from the San Juan River. In 1978, the Uranium Mill Tailings Radiation Control Act was passed, appropriating money for cleaning up mining and mill tailings nationwide.

In 1986, what was left of the mill was removed and the liner was placed over the tailings pile. The site was surrounded by chain link fence and warning signs, but it’s just across the street from a fairly dense housing area. Congress later passed standards for groundwater, and wells drilled in the aquifer between the old mill site and the river indicated levels of uranium as high as 5 miligrams per liter (a maximum of 0.3 milligrams is allowed by the EPA in drinking water).

Although no one is using the aquifer for drinking — Shiprock’s water supply comes from the Animas River near Farmington, Kautsky explained — it does drain into the San Juan River, which local people use to irrigate their crops and water their livestock. To address the situation, the pond and a series of wells into the aquifer were constructed in 2002. Water is pumped from the wells into the pond, where it evaporates and uranium and other contaminants settle to the bottom.

The system seems to be working. As of 2017 the most highly contaminated parts of the aquifer were at 1 to 3 milligrams per liter, and much of it tested at 0.04 milligrams or below. Of course, the uranium has to go somewhere, and it has now settled into a layer of sludge on the bottom of the pond which is contaminated enough that, if the DOE decides to replace the liner, will need to be trucked to either a processing facility in Blanding, Utah, or a disposal site near Grand Junction, Colorado, depending on the nature of the material.

Either removing the pond and wells or rehabilitating them will involve trucking the waste out, which caused some people concern not only for Shiprock but for all the towns en route. Those two alternatives would also increase traffic in an already busy area of town because of the construction, Kautsky said.

On the plus side, those two alternatives would provide much-needed local employment and training in hazardous waste removal.

Leaving the pond be would avoid the traffic and trucking issues, but if the lining fails or the pond overflows, the aquifer could be re-contaminated. Kautsky said it’s not known how much uranium is still leaching out of the tailings. Kautsky said there would be more information at the next scoping meeting, from 10 a.m. to 2 p.m. Sept. 21 at the Shiprock Chapter House.

“This is just the start of the conversation,” he said.

More information can be found at https://www.lm.doe.gov/shiprock/Sites.aspx. Comments on the handling of the pond can be submitted by mail at Shiprock Evaporation Pond, c/o Navarro Research and Engineering, 2597 Legacy Way, Grand Junction, CO 81523. They can also by left by voicemail at 970-248-6001 in English or Navajo, or submitted by email at ShiprockEvaporationPond@lm.doe.gov.