In his first year coaching the Thoreau volleyball program, Kyron White inherited a squad that brought back only two players from the previous season. 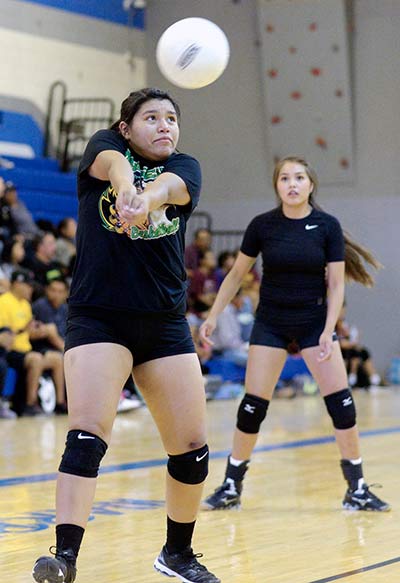 A Thoreau Lady Hawk bumps the ball on August 17 in Navajo Pine, N.M. during a scrimmage.

At that time, White assumed his team would take their lumps but, to his surprise, his young team exceeded his expectations.

“I was thinking it was going to be more of a rebuilding year,” White said. “The year before we lost a lot of players so I figured we would struggle that first year.”

Instead the Lady Hawks finished the season with a 14-9 record, which included a 7-3 slate in league play.

With what he has returning, the second-year coach said they have set higher goals this season.

“Last year we got district runner-ups even though we were in a rebuilding mode,” White said. “This year we want to try and win the district.”

“They won every single game last year,” White said of the Lady Eagles squad, who will be coached by first-year coach Rae Collins. “They serve tough and they’re real athletic.”

By finishing as the reserve champions in District 1-3A, Thoreau earned a bid to the state tournament. That invitation ended a 14-year state-bound drought.

“Our girls have a ton of experience so we’re ready to go,” he said. “Hopefully we can get one of the higher seeds for state.”

White said the Hawks have ample weapons to turn to at the net with Sena manning the offense at the setter’s position. Last season, he said, Garcia, Begay and Pino were his most consistent hitters and he’s expecting them to put up some gaudy numbers.

“They’ve been working hard all summer so we’re excited about this season,” he said.

“I think every team will struggle with serve-receive, from high school to college, but I think we’re doing a lot better with it,” he said. “Our serving is a lot stronger as well.”

The Hawks opens the season today with Class 4A Gallup and later this year they will participate in two tournaments – the Rehoboth and Moriarty invitationals.

In the Moriarty tournament last year, White said they placed fifth in the silver bracket as they went 2-1 in bracket play. They defeated Hot Springs and Bernalillo while losing to Lovington.

“Last year we saw some really good teams,” White said. “We saw some tall 5A and 4A teams so we’re looking forward to going back.”