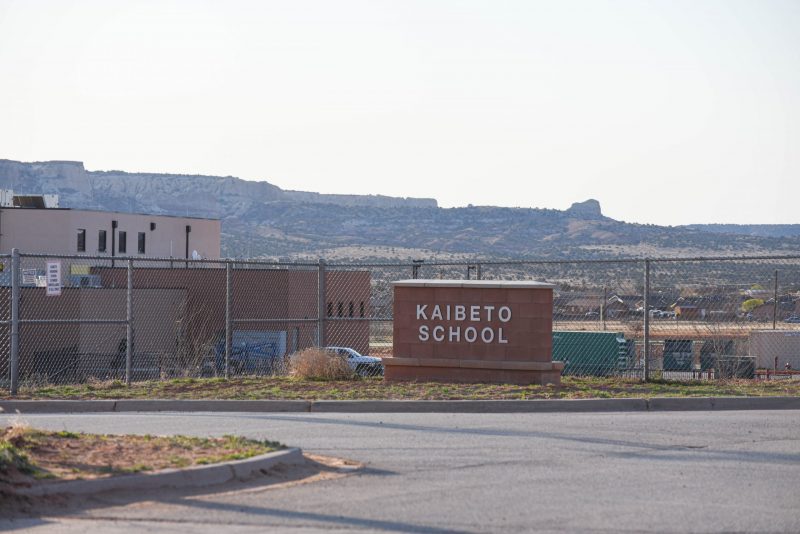 Special to the Times | Krista Allen
Kaibeto Boarding School has a total of five confirmed cases of the coronavirus that causes COVID-19.

The Navajo Nation Board of Education announced Tuesday that all schools in the Navajo Nation would be closed throughout the end of the school year. While students are now adjusting to learning outside of their classrooms, some school employees are still reporting for duty amid five confirmed cases of the coronavirus at one school and two deaths at two others.

The Kaibeto Boarding School governing board on Friday night announced five confirmed cases of the coronavirus at KBS in Kaibeto, Arizona. And it’s possible that some more employees – and locals, including nearby residents in bordering communities – contracted the virus due to exposure to the infected employees.

“These employees had access and contact within our school,” Bahozhoi N. Kinsel said about the five KBS cases.

Kinsel, the president of the governing board at KBS, wrote a letter March 30 petitioning the Bureau of Indian Education administration to completely close all BIE-funded schools on the Navajo Nation. The Navajo Nation Board of Education the next day announced that physical, face-to-face classroom instruction in all schools throughout the Nation would be closed for the remainder of the school year.

“It’s just for the students. It wasn’t for everybody. It wasn’t for the entire school,” Kinsel explained in an interview with the Navajo Times on Friday night. “When that letter was (released), that was when the kids stopped going to school. And then they were still having all employees report.

“When you think about the whole school being closed, you think, ‘OK, the kids are gone, the employees are gone –– it’s officially closed.’ But it wasn’t. And we had advocated for that and that’s what people don’t understand.”

Kinsel said some KBS employees started showing symptoms of the coronavirus last week and they didn’t know they were infected until around March 24.

Symptoms of the coronavirus typically take some time to start showing after infection. The average incubation period is five to six days, but may range from two to14 days, according to the Centers for Disease Control and Prevention. This means that people who are starting to develop symptoms now are the ones who were exposed to coronavirus about a week ago. In some cases, even longer.

“If health officials are correct, our employees would have contracted the sickness up to two weeks ago. This would have exposed and endangered our students, children, and employees to COVID-19,” she wrote in her March 30 letter that was copied to a number of people, including KBS Acting Principal Veronica Klain, BIE Director Tony L. Dearman, and President Jonathan Nez. The letter prompted immediate backlash from higherups.

Kinsel said she first heard rumors about it, and then immediately addressed the KBS vice principal who then confronted the infected employees and sent them home to self-isolate.

“Why didn’t they stay in instead of exposing everybody at the school that’s working or even some of the lunches (school lunch program), at (Kaibeto Market) –– walking around here like nothing was happening, like they didn’t have to adhere to the quarantine?” June said. “What part of it do they not understand: Stay home? Why are they endangering our children? Why do they not take this seriously, the pandemic?

“The Bureau’s always had the problem of not working with other entities: the tribe, the county, or with the state. They feel like they don’t have to adhere to anything. They get really stubborn about what’s best for the children. Now, the administrators are at home teleworking, plus the teachers.”

The vice principal, Veronica Klain, had some employees sanitize the school. She then requested the BIE either do a deep-clean or at least close the school.

“That was (the principal’s) recommendation but (BIE) wanted to see if (the cases were confirmed),” Kinsel said. “She told them (they’re) confirmed but they still wanted to function the school.

“She did bring (the Rocky Ridge Boarding School case) to them and they didn’t want to close the school because someone died. She … clearly told the (BIE), ‘When’s enough, enough?’”

Kinsel said the KBS governing board had been pleading with the BIE to close the school entirely to help flatten the coronavirus curve, meaning isolation measures that keep the daily number of disease cases at a manageable level for medical providers.

“All the way up to Washington, D.C. –– (BIE Director) Tony L. Dearman, telling him that he needs to have only essential workers and not have all 49 (KBS) employees come to work,” Kinsel said. “It took a while to go through and finally (on) Friday, he passed it to where it was only essential workers. But it took him so long to respond. But right now, it’s kind of too late.”

At Rocky Ridge Boarding School near Hard Rock, Arizona, one educator, Laverne Bitsui, died after she may have contracted the coronavirus from at least one or two employees who may have carried the virus before showing symptoms.

Bitsui’s family said the late educator took youngsters in the family to school with her the week before the boarding school’s spring break (March 23-27).

“As far as her sickness, she was sick, but we don’t know how bad,” said a family spokesperson in an interview on Saturday. “She did have health problems.

“At the same time, I think she was trying to be positive about it, trying not to get herself scared –– I guess we were not expecting this. She did tell us that other employees are infected … and now they’re passing it on to their families. Some of them from the chapter house also were in meetings with the (school) employees also.”

In a memo to parents posted online, RRBS Acting Principal Timothy Clashin wrote that the school was infected with the coronavirus and it was closed by the Navajo BIE District Office on Friday, March 28. Staff were sent home to telework.

“As far as I know, one of our community members has passed on,” said Council Delegate Jimmy Yellowhair (Hard Rock/Forest Lake/Piñon/Black Mesa/Whippoorwill), who said he is in quarantine at his home.

Yellowhair said he immediately addressed the situation and followed up with area officials, including President Jonathan Nez and his staff, a majority of whom did not respond to him.

“No return call from him – nothing,” he said about Nez.