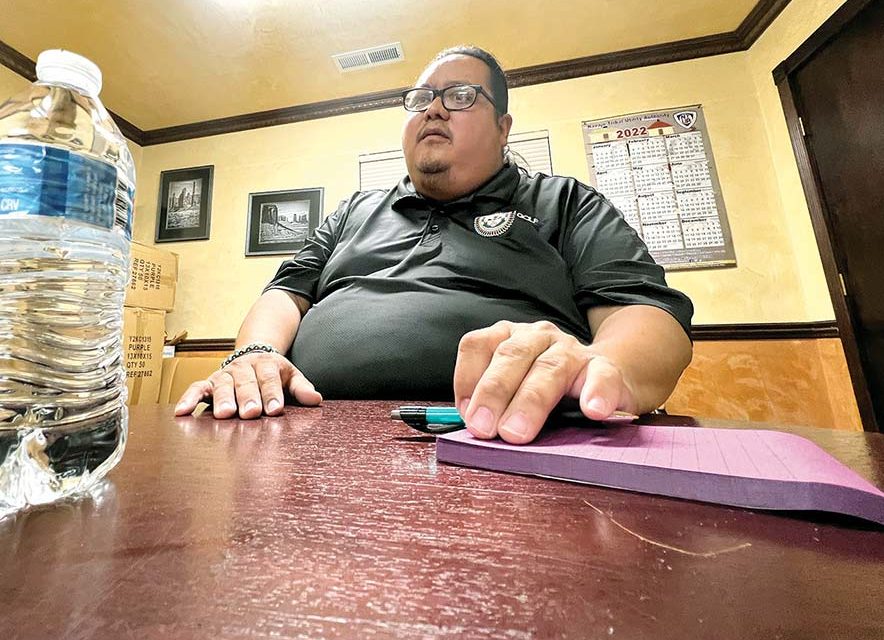 Seth Damon’s future is up in the air.

The troubled speaker of the 24th Navajo Nation Council, who admitted to the Council he was photographed under the influence of alcohol during the Indian National Finals Rodeo, which took place from Oct. 18-22, said on Tuesday afternoon during an interview with the Navajo Times that he “really messed up” after having a little too much to drink.

“Only reason why I’m here is to hear it from the horse’s mouth rather than somewhere else, right?” Damon said on Tuesday at his office in Window Rock.

A photograph of Damon went viral on social media, depicting him as intoxicated and sitting at a casino slot machine in Las Vegas, Nevada. The person who took a photograph remains unknown.

In a statement, Damon stated he was not on tribal business while in Las Vegas. His colleague, Council Delegate Otto Tso, said on Wednesday in an interview with the Navajo Times, said he was in Vegas to attend a meeting with Navajo Community Development Financial Institution, which then president Russell Begaye appropriated $20 million to provide a financial catalyst to support entrepreneurs looking to start a business on the reservation.

Eugene Tso corroborated Otto Tso’s memory of the Oct. 22 meeting with NCDFI at the South Point Casino. The delegate added the speaker was also in attendance at the meeting.

Damon stated several times, and during an interview with the Navajo Times on Tuesday, he went to the INFR on personal time.

Otto Tso stammered and said he saw Damon around 4 p.m. at South Point. The Navajo Times asked Otto Tso if he noticed if Damon was intoxicated, and he said he “did look intoxicated to me.” He was asked to clarify his comment about whether he saw Damon intoxicated or not.

Damon said he was in the South Point Hotel Casino when the photo was taken of him on Oct. 22.

The candidate and current representative of Bááhááli, Chéch’iltah, Manuelito, Red Rock, Rock Springs, and Tsayatoh chapters, said he got to the casino on Oct. 22 and “hung out.”

“I just want to be honest and say that I was there with friends and family and got to a point where I think I overindulged too much alcohol,” Damon said.

Damon said he took the “necessary steps” and “owned up” to his misconduct and told members of the 24th Navajo Nation Council. He added that one of the things he wanted to do was to make sure that he was held accountable for his actions, referring to his public drunkenness.

While Damon may not have broken any laws in Las Vegas or the state of Nevada, he admits he “broke the integrity of the Speaker’s office.

A proposed seven-page legislation was introduced last Friday that will indefinitely place the speaker on administrative leave if it passes by a majority vote. The legislation is eligible for action today or tomorrow.

“Personally, that’s where I know I did. And I owned up to that, and I told them that,” he said of his meeting with the Council.

Whether the Council votes to remove him or not, the speaker said the days following the Oct. 22 incident were the worst for him.

“Last week was the worst. More importantly, it was the worst for my daughter and my grandparents. I know it broke their hearts,” Damon said.

Damon explained he went to Vegas to visit with family, support his nephews and the INFR athletes, and meet up with his friends.

The three-term Council delegate did not go into too much more detail, other than that he drank too much.

Damon became emotional when he said his grandparents spoke to him. He wouldn’t divulge what they said, but it cracked his voice.

“It broke me. It literally broke me,” he said as he tapped his fingers on the table at his office, as he thought of what they said to him made him feel.

“I know I f—ked up. I know I really messed up, but I’m going to do this to help myself and the people who elected me, and most importantly, I’m gonna regain the integrity of my grandparents for the better,” an emotional Damon said.

The distressed speaker said he wanted to make this a “stepping stone” and use it to go in the “right direction.”

“I want to see to live to see my granddaughter graduate from high school,” he said.

He became apologetic and wanted to tell the Navajo people he was “very sorry” for breaking the integrity of the office.

While seeking help, Damon learned the challenges of not knowing who to call when seeking help for his drinking problem.

“I gotta say that is one of the worse … you don’t know where to call. I had the hardest time trying to figure out how to get help,” he said of what he learned.

Eventually, Damon said he connected with the right office and would go to a treatment facility by Saturday or Monday. While unsure where his treatment could lead him, Damon is compelled to find out if life without alcohol is in his future.

“I can tell you that I have a problem, but that’s what I think I’m gonna go find out. I think that’s what I need to find out. Why am I like this? Why did I do this to myself? Why did I put myself into that situation? I think those are the answers I will find out along this path,” he said.

The reality of knowing his path to recovery has no end. He said his recovery would be a “long road” for him and his family.

Damon is up for re-election and will most likely be at a rehabilitation center on Nov. 8, when voters will be casting their ballots for him.

Stewart did not respond to an interview request at press time Wednesday evening.