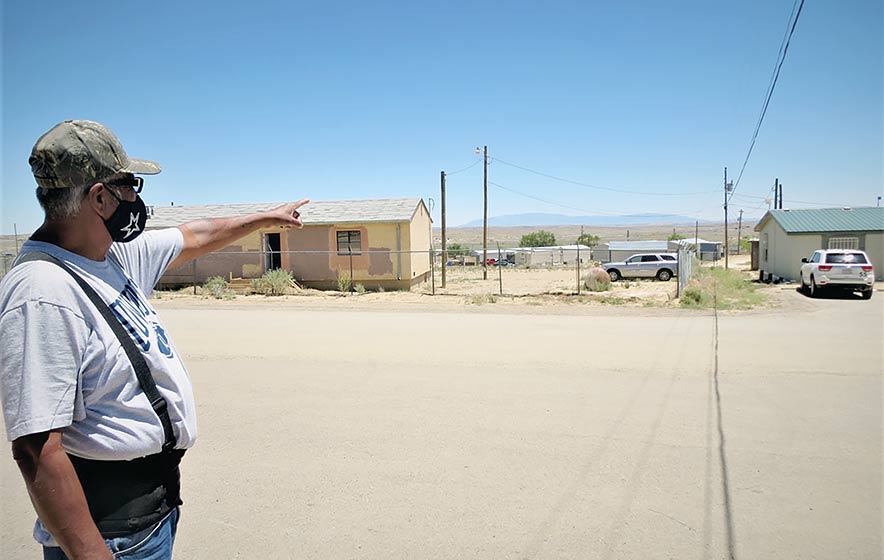 Special to the Times | Colleen Keane
To’hajiilee Chapter President Mark Begay looks east towards Albuquerque at a proposed water pipeline route that could bring fresh water to his community.

Mark Begay looks east across the horizon. He’s standing in front of To’hajiilee Chapter where several residents are handing out packs of bottled water.

From his vantage point, he envisions the route of a proposed water pipeline between To’hajiilee and Albuquerque, which could bring desperately needed fresh water to his community of around 2,500.

“All we need is an easement” through private land to connect to the city/county water system, explains Begay, the chapter’s president.

But, he said, the path to the waterway is blocked and has been for almost two years.

“The (water pipeline) could have been completed by now,” said George Mihalik, project engineer from Souder, Miller and Associates. “It’s frustrating. We have a solution, but we can’t get it to happen.”

To’hajiilee, a chapter located 24 miles west of Albuquerque in Bernalillo County, has been dealing with water shortages and outages. During the coronavirus pandemic it is critical to have water to wash hands regularly and disinfect surfaces.

With the recent spike in coronavirus cases, Begay worries about a second wave and his community’s dependency on one aging water well.

“This has been a crisis,’ he said. “Now it’s beyond crises.”

“It’s just a matter of time before the well goes down, just like it did last summer,” warns Mihalik.

In response a year ago, the Albuquerque-Bernalillo County Water Utility Authority tanked in tons of water.

The well was patched up. But, Begay said, the water coming out of it isn’t drinkable.

“It smells like rotten eggs, it’s dirty,” he said.

Besides quality, Mihalik added that the community’s lone well doesn’t produce enough water for family homes. Residents often have to wait hours for trickling water to reach them so they can wash clothes, dishes and take baths.

Connecting to the urban water system is not a new idea. In 2006, then Chapter President Tony Secatero signed a cooperative agreement with ABWUA.

But, laying pipes the distance between To’hajiilee and Albuquerque was too costly and the project was put on hold, noted Begay.

Then, in recent years, a land developer, Western Albuquerque Land Holdings, constructed a three-million-gallon water tank farther west of the city to serve  a planned community for tens of thousands of people.

After construction, WALH turned the gigantic tank over to the water utility for ongoing operations.

The water tank brought the city/county water system much closer to To’hajiilee, cutting the distance of the proposed pipeline to 7.4 miles, making the project financially feasible.

With the ABWUA cooperative agreement passed on to him, Begay’s hopes for a solution to his community’s water crises finally seems close at hand.

For nearly two years, Begay’s requests for the easement have fallen on deaf ears.

Since August of 2018, Begay and Mihalik made several attempts to work out an agreement with WALH’s asset managers, Ted Garrett and Mathew Look, of the Garrett Development Corporation of Arizona.

Asset managers are those who sweep in before construction gets off the ground, clearing the way for infrastructure, like water and roads.

Begay and Mihalik made phone calls, wrote emails and sent letters. Mihalik caught up with Garrett and Look at a real estate conference.

During these efforts, Begay and Mihalik emphasized that costs for the easement and use of any infrastructure would be covered by the Navajo Nation and To’hajiilee wouldn’t be using Albuquerque water.

“We are only proposing to use the (water authority’s) pipes to deliver water owned by the Navajo Nation to To’hajiilee,” explained Begay.

David Morris, public affairs manager for ABWUA, in an email to the Navajo Times, said, “We are looking forward to fulfilling our commitment to delivering water to To’hajiilee once the pipeline is built (by the Navajo Nation).”

He noted that the water authority, as part of the cooperative agreement with To’hajiilee, would treat Navajo Nation water “at the Nation’s expense.”

No matter how much they’ve tried, Begay and Mihalik said they have not been able to get the Garrett Development Corporation to come to the table to negotiate an easement.

They said they have been met with dodges, delays and a down-out refusal, “we are not interested,” even during To’hajiilee’ s water well emergency last summer.

Debbie O’Malley, a Bernalillo County commissioner, who has been advocating for the easement for some time now, said, “It’s been two years. I’m incensed (that this is happening). These are my constituents. This is a kind of institutional racism that continues over and over again.”

The westside development was financially backed on the most part by the British bank Barclays, which foreclosed on a previous developer, the real estate company Sun Cal. The New Mexico secretary of state first listed Barclays Capital Real Estate and WALH on its corporation services site in December of 2010.

Recently, Barclays was identified as one of the banks that have historic ties to slavery. Deadria Farmer Paellman, executive director of the Restitution Study Group, traced the slavery roots back hundreds of years.

On hearing about To’hajiilee’s stalled water pipeline project, she said something should be done right away.

“They are on (ancestral) indigenous land, the least they (the developers/the bank) could do is respect the health needs of Native American people,” said Paellman.

“Jay-Z and his wife Beyoncé would want to do something,” she said. “They care about social justice.’

This past spring, Bernalillo County commissioners agreed, if necessary, to proceed with condemnation, also known as eminent domain, the process in which a government takes over private land for the good of the people.

“I’m going to push as hard as I can to condemn (if the Garrett group doesn’t step up to negotiate). There is no excuse for To’hajiilee not having water today,” O’Malley said.

Begay added, “If possible, we don’t really want to go the route (of condemnation). We want to see if we can work something out.”

Mihalik said the 7.4-mile pipeline is ready for construction as soon as the path to the city/county water tank is clear.

Preliminary plans have been drafted, planning money secured, and two other property owners along the path have given permission for easement.

“Time is of the essence,” noted O’Malley.

The pipeline project would take between six months to a year to complete, according to Mihalik.

“This (Navajo Nation) water coming from Albuquerque could solve our problem for the next 100 years and more,” added Begay

For now, Begay is leaving it up to higher powers.

“We have to pray on it and see whichever way our creator takes us,” he said.

The Garrett Development Corporation did not return calls from the Navajo Times.

A spokesperson for Barclays Bank in the New York City office said he would look into it, but didn’t respond before deadline.