‘We were ready to rock ‘n’ roll’: Nez reflects on highs, lows of pandemic year 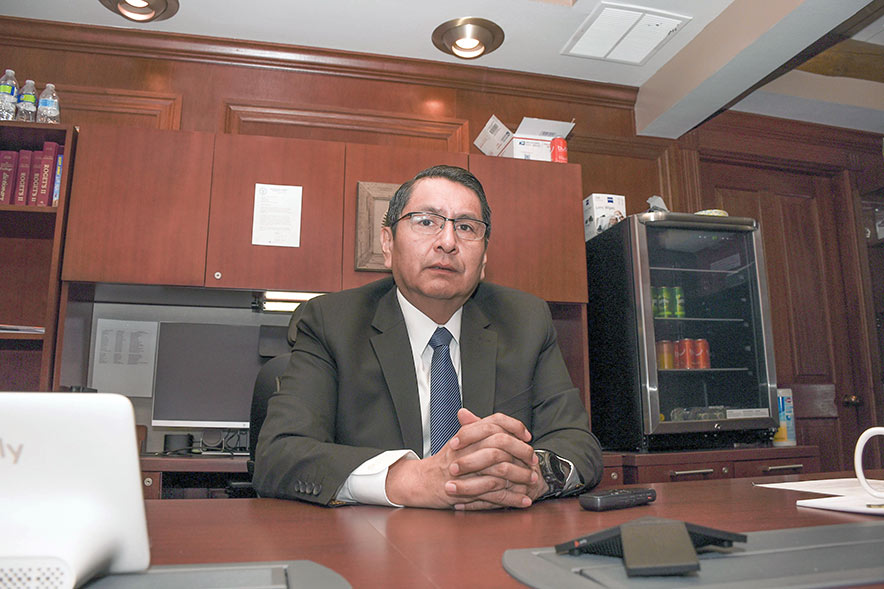 Navajo Times | Krista Allen
Inside the president’s situation room on Tuesday morning, President Jonathan Nez talks about Diné suffering pandemic whiplash as the Nation struggles with the virus. Nez and his staff have been on the front lines since the coronavirus entered the Nation in 2019.

President Jonathan Nez will end his third year in office next Saturday on a high note even though the coronavirus pandemic is still twisting the Navajo Nation into knots.

As the Delta and Omicron variants come at a challenging moment for Diné Bikéyah, the Nez-Lizer administration is trying to guard against blows.

Are Diné ready for ‘alcohol and marijuana’?

Nez said he and Vice President Myron Lizer accomplished quite a lot in 2021.

To top it off, Nez on Tuesday night signed the Navajo Nation Council resolution (CD-62-21) that allocates $557 million in American Rescue Plan Act funds for Hardship Assistance, which will provide $2,000 payments to 250,000 Diné citizens and $600 per child.

“We’re getting close to two years of this pandemic,” Nez said in an interview with the Navajo Times inside the president’s situation room on Tuesday morning.

Seeing Diné come together and look at the coronavirus, ch’osh doo yit’íinii, in a whole different way and using that perspective to push back on the virus, are two of the highs, said Nez.

“Our way of life teaching here on Navajo have helped us fight COVID-19,” he explained. “Our teaching since time immemorial has been that Navajo people are plagued with monsters.”

One of those life-teaching stories is the Hero Twins, the traditional narrative that parallels the journey of life and that defines the foundation of Diné culture.

“Many of the adversities that we’ve gone through, throughout the history of Navajo, has helped us through the pandemic,” Nez explained. “Now, you have this monster called COVID-19.”

While leaders around the world have replaced their lecterns with a chair and a remote setup, and having interviews go to them, Nez and his staff were out there risking their lives – and those of their families – to serve Diné across the Nation.

And even though they were confused, frightened and exhausted, they kept going.

“We were out there every day at the height of the pandemic,” Nez said. “We never debriefed. We never sat around a table or sat down in a meeting about what we went through. We’re still going through that right now. We haven’t stopped.

“(It’s) very important for the Navajo people see their leaders through this pandemic, this war against this pandemic,” he said. “I had the honor of rubbing with shoulders with our warriors.

“And to see the compassion, the dedication of our Navajo Nation employees was extraordinary during a time when things were scary,” he said.

Nez said there was so much uncertainty at the beginning of the pandemic as he and his staff tried their best to help as many people as they could despite the hard and dangerous fight and conflicting guidance from public health officials.

“We didn’t know if we were going to (contract the virus), we didn’t know what was going to happen,” Nez said. “Nonetheless, we were out there every single day, giving out food, giving out supplies so that people can stay home and hunker down.

“We did three to seven communities a day and we visited all one 110 chapters during that time,” he added. “And just to give hope to our people. When we were out there, just letting the Navajo people know that we’re going to get through this.”

This experience reminded him of how Diné leaders like Chief Manuelito and Barboncito, Hastiin Dághaa’, handled conflict, hoping to sow peace, said Nez.

“I’ve been talking about this lately,” he said. “Yes, that’s inspiring and encouraging for Navajo citizens today, but at the same time, I think they don’t really understand what they (old leaders) went through.

“Today, we have a perspective and we’ve seen firsthand what our people (of 402,000 enrolled members of the Navajo Nation) can go through,” Nez said.

“To encourage them was one thing and to inspire them was another,” he said. “Utilizing our way of life teaching, the things that was taught back then during (Hwéeldi) to today, it’s somewhat the same.”

Among the blows of the pandemic, Nez’s ultimate goal was to make sure Diné were safe and to give them weapons and armor – just as the Hero Twins were given armor – to fight COVID-19.

These armors are mask-wearing and social distancing amplified by the White House and the COVID-19 vaccines.

The weapons are Diné teachings and the protocols such as lockdowns.

“But to see another generation to receive and accept that type of teaching was awesome to see,” Nez said. “It wasn’t about staying home and being scared. It was, ‘OK, now we’re home. What can we do now that everybody’s at home?’

“We said, ‘Teach your generation about our ways,’” he said. “‘Maybe develop your own immersion programs.’

“And we saw a renaissance of Navajo: Navajo way of life, Navajo language,” he added. “A lot of Navajos took up that challenge and started farming again … taking care of cattle and their animals – doing some hard work. That’s the resilience.”

Nez said the pandemic has a unifying force. It also has opportunities to revamp and reshape the preparedness of the Nation’s public health.

“Yes, there are some lows, but through every challenge for anyone and for us as a people, I saw the Navajo people come together as one,” Nez explained. “We saw those stories across the Navajo Nation.

“Who would have known, when vice president and I got sworn into office, that we would be governing through a pandemic?” he said. “We didn’t know.

“We were ready to rock and roll and change the Nation,” he said. “Of course, that slowed down because of the pandemic.”

However, the pandemic has brought new opportunities and a different perspective as an influx of funding has come to the Nation amid uncertainty and getting up for a new normal.

“We all need to make sure that people are taken care of – yes – but we have to also remember we’re building a Nation,” Nez said. “It’s all about Nation-building.”

This means water, infrastructure, broadband telecommunication, roads, homes, and other things like curbing violence and addressing climate change, and inequities. It will be a transformational effort.

“A majority of our people live off the Navajo Nation, but eventually those living off will come home one day,” Nez said. “We have to prepare for their return and here’s the opportunity. That’s what people don’t understand.

“Yes, there is an immediate need for relief,” he said. “I understand that and people are struggling. But there’s also a building of a nation that we need to remind ourselves of.”

From urgent conversations in townhalls to minor controversies that fascinated people, Nez said two lows of 2021 are seeing and hearing what’s happening around the Navajo Nation.

“My grandmother used to say, ‘What’s happening in white communities and overseas, it’s going to enter our Nation when you’re sleeping, when you least expect it,’” Nez said in Navajo.

That means negativity that’s happening around the world will creep into the Navajo Nation if people are not attentive.

“You see that starting to happen here on Navajo,” Nez said. “The protests that happened across the country, now you’re starting to see that here on the Navajo Nation. There are protests happening here (outside the Council Chamber and outside the president’s office) on Navajo.

“But that’s being chipped away because of all this divisive talk that’s happening,” he added. “But after these protests, the elders stepped up, parents stepped up and said, ‘That is now how you talk to our leaders.’

“Those types of teachings, we don’t talk the way we used to,” he said. “It’s evident with this pandemic.”

Nez said it was the Diné elders who took the pandemic seriously because 87% of older men and women were vaccinated and boosted against COVID-19.

If Nez had a tough job this year, the stakes will be even higher this year with the upcoming elections.