In the midst of another drought season, even though monies are available for drought mitigation through the Agriculture Infrastructure Fund, Department of Agriculture Manager Leo Watchman said due to the pandemic, the government shutdown, and COVID-19 exposures, projects have been going slowly.

In last week’s Naabik’iyati Committee meeting, delegates pressed Watchman for answers regarding the lack of agriculture and water resources on the ground to assist livestock owners, repair windmills, wells and earthen dams, and the feral horse problem.

Watchman said that his department is shut down by about 50 percent.

“We have 42 staff and 23 working,” he said. “My staff is saying, ‘Where does it say we have to come to work?’ and I keep telling them there’s need out there.”

Division of Water Resources Director Jason John described the challenging process of asking people to come to work after they had been released on administrative as part of the president’s emergency declaration in March. 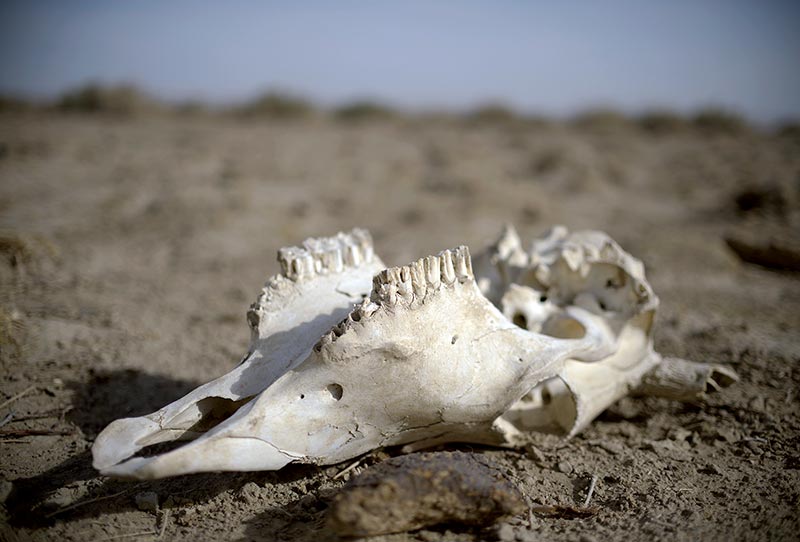 Navajo Times | Donovan Quintero
A bleached horse skull lies on the sand of the Navajo Nation. Climatologists say the Nation is in a “megadrought” that started in 1996.

John said initially he was the only deemed essential in his department, although many of his staff continued to work from home and on an “on-call” basis.

On June 16, Division of Natural Resources Director Rudy Shebala finally sent out a memo deeming everyone in the division essential, he said.

“That’s when we started asking our supervisors to contact staff and ask them to be ready to come into work, as needed,” said John.

Najam Tariq, director of the Technical, Construction, and Operations Branch, said that less than half or his workforce of about 50 employees is coming to work because of COVID-19 fears.

“Because of the lack of staff, we have been addressing only emergency needs,” he said.

Not enough to go around

In December of 2018, the Navajo Nation Council approved RDSC-10-18, which created a $19 million Agriculture Infrastructure Fund with monies from the USDA Pasture Rangeland Forage Insurance Program, now in its fourth year. An additional $17M was added by the 23rd Council.

$14.5M was allocated for 27 projects for year 1 expenditures and only 24 percent of the monies have been spent so far, said Watchman.

Watchman said due to numerous delays in the Navajo Nation processes, they didn’t receive monies for projects until August of 2019.

“It took eight months to set up a business unit,” he said.

The pandemic is making it even harder to get funds out, said Watchman.

He informed delegates that there is currently a balance of $9M in the AIF that is unobligated and he and Shebala are working on a plan to use that for drought mitigation, water resources, livestock management, and addressing feral horses.

“In regards to water, we know that we go through this every year during the drought season,” said Delegate Vince James.

James described a situation in Steamboat last week where horses were falling into a waterhole trying to get to the remaining water.

“Some were getting stuck in the mud,” said James. “If they had the energy and the strength they were able to crawl back out. They were suffering and some died.”

The community had requested a roundup, but that didn’t happen.

“From my understanding, Dr. Shebala indicated no horse roundups are to happen,” said James.

“I understand your staff is stretched and currently in a skeleton crew mode,” said James. “What are your plans to assist us to do these horse roundups?”

Watchman acknowledged the “severe feral horse problem” that has created an emergency situation where horses are dying and livestock need resources.

“There’s not enough to go around,” said Watchman.

He confirmed Shebala put the horse roundups and equine rewards program on hold.

Meanwhile, Watchman said there are 75 resolutions across Navajo requesting horse roundups in line with the seizure law and some communities have reported over a thousand feral horses.

“Unfortunately, with the pandemic and the shutdown we weren’t able to get to some of those initiatives,” said Watchman “The intent with the additional money is to get out to all the communities.”

Watchman said chapters need to be involved too.

“Each community is unique and there are a lot of disputes,” he said.

Vandalism is also a problem with windmills, wells and storage tanks, he added.

“As chronic and serious as these problems are, we have to respond,” said Delegate Thomas Walker, adding excuses won’t do.

“We all know the situation and the complexity involved,” said Walker. “We have a whole division with departments and programs that directly relate to these matters of land, water and livestock. We have to get to the bottom of this.”

‘Not much is moving’

“We have serious problems out there right now,” he said.

Yellowhair said it’s important to get dams built and repaired before the rain starts.

Watchman said there is $500K set aside for NPL fencing for range units, but the BIA still has control over NPL.

He asked if the policies in place need to be amended or streamlined to work.

“Is it time to contract out services?” asked Otto Tso. “If people don’t want to come back to work, they can stay at home, and we can do contracts.”

Watchman responded that they are considering using private sector contracts to help out because staff is on leave.

Otto Tso asked if there is a plan to enforce a stock reduction for permittees.

“When we see animals out there looking for water, at one point is the responsibility on the program?” he asked. “If no one claims the horses and they aren’t branded do they belong to the Nation?”

Watchman said any horse over six months old that is not branded becomes Navajo Nation property.

Tso also asked about the status of animal health program and Watchman responded that the veterinary clinic does support herd health, but it is shut down.

“There’s no excuses,” said Watchman. “Unfortunately we weren’t prepared for the drought due to the pandemic.”

Vince James asked if there were plans to replenish water dams and provide jack pumps for windmills as well as hand pumps.

“I know you’re staff tries to address these matters, but it seems like it’s not enough,” said James. “We have families out there who depend on these windmills.”

Eugene Tso said that grazing officials used to get training in castration, trapping, and herd health.

He said the problem is that the DOA took away their authorities and oversight.

“They had authority over resources,” he said. “They need to be reestablished in the chain of command.”

Eugene Tso said per the original plan of operation grazing officials were to meant to conserve natural resources such as water and forage.

“If you’re going to be a rancher, you should know the land,” he said.

Eugene Tso said that windmills are also a part of range and livestock management.

“The grazing committee knows the areas,” said Eugene Tso. “They really don’t count any more. We elect them and they are just put aside.”

He said the traditional teachings relating to herding and respecting other ranchers are all gone.

“Now we’re fighting with permits and leases,” he said.

This has caused infighting among families.

He pointed that out that BIA oversight comes with trust responsibility, including doing range utilization studies every year, but that hasn’t been happening.

“That money is for the people,” he said. “We need to start rebuilding our Navajo Nation.”

Watchman explained that lawsuits against the Nation over castration and vaccinations were causing liability exposure, which caused the reduction of authority for the grazing officials.

He said that is especially challenging now because many permit holders and producers don’t adhere to policies.

“Our grazing officials become compromised when they try to enforce compliance,” he said.

Najam Tariq said due to lack of funding his department experienced a shortage of staff and equipment even before the pandemic.

“We are doing our best with the limited resources we have,” said Tariq.

He said it costs about $6M a year to maintain windmills but his department gets about $3M.

Fortunately, with the money from the AIF his department was able to buy two new bulldozers, two semi-trucks and two transportation trailers to expedite dam construction, but by the time they came in COVID-19 had arrived.

Tariq said his department has a total of three drivers, who transport supplies and equipment to 14 field offices across the Nation, and also construct the dams.

“Two of the drivers are not coming to work because of COVID-19,” he said.

His department is not allowed to work on windmills on NPL, but Tariq said that the BIA has plenty of staff and equipment an office in Pinon.

“The responses are weak and we’re supposed to be a strong government,” said Delegate Daniel Tso. “What are the key factors which would cause the whole division to respond? The pleas from the Chapters and this Council seem insufficient to cause DNR to react.”

Delegate Elmer Begay said grazing officials in his area have also sent numerous 213 requests for assistance to the Navajo COVID-19 Health Command Operations Center with little or no response.

“A windmill only works on a windy day,” said Begay. “How many years have we been saying we need jack pump engines? We need to provide a reliable water resources.”

“In order to install the pumps and the wells, we need to have the power,” he said. “We are working on that.”

“We need to upgrade the systems,” he said.

Jason John informed delegates that there is a comprehensive drought contingency plan that was approved by resources committee in 2003, which is still in effect.

Part of that plan involves monitoring of drought conditions.

“We knew that this drought was getting worse back in April and May,” he said.

John said his department sent a request for a drought emergency declaration to the Emergency Management Commission, chaired by Herman Shorty, in mid-May.

“The commission has to declare a drought in coordination with the Office of the President,” John told delegates. “That kicks in a strategy to coordinate with all the chapters and various departments.”

John said there is a whole host of things that could be done as part of the contingency plan, which also launches federal agency responses.

“As it is now, we’re really just trying to respond at a program level without the infrastructure of the chapters and emergency management coordination,” said John. “That’s the difficult part. In light of all this we’re still trying to do what we can.”

“Now we get to the heart of the matter,” said Daniel Tso.

“Speaker, I look to your direction on how to get the commission to address the drought emergency,” said Daniel Tso, appealing to Speaker Seth Damon.

Tso said livestock owners are part of the food sovereignty chain and it’s important to support them.

Walker said the Nation and the federal government need to do more to help Navajos access water.

“I think the solutions are right underneath our feet,” said Walker. “We live on an abundance of water.”

He said communities need to be empowered to exercise their self-determination and sovereignty.

“How can we enable our communities, our families and individuals to consider tapping into the water themselves, by drilling their own pumps and constructing their own wells?” asked Walker. “We need to be forward thinking.”