Attorneys with the Southwest Center for Equal Justice say they are planning to file a lawsuit against the Flagstaff Police Department and possibly other enforcement agencies that participated in the June 18 drug raid that mistakenly netted a Navajo man. 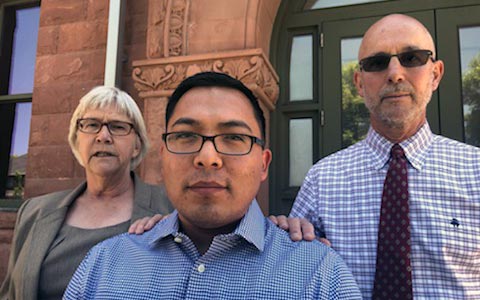 Tremayne Nez, 25, of Flagstaff was arrested along with 36 other people in a multi-agency raid that covered much of Flagstaff. He spent 30 hours in jail and was released on bond.

This Tuesday, FPD dropped charges against Nez and released a statement saying he was not involved in any drug sales. They also issued a public apology and thanked Nez for his cooperation.

Not enough, say his attorneys.

“On June 18, Tremayne’s life was turned upside down,” wrote SCEJ Executive Director Wendy White in a press release. “From the happy celebration of college graduation to facing a squadron of heavily armed police officers wrongly accusing him of a crime he did not commit, this young man went from a high point to the worst day of his life in just one month.

“This outrageous mistake will have a lasting negative impact on Tremayne and his wife Marcella,” White said.

Flagstaff Police said a confidential informant had mistaken Nez for Trey Store, who was arrested Tuesday on charges of selling cocaine and LSD.

FPD public information officer Sgt. Charles Hernandez said the department is looking at ways to refine its policies so “this type of thing doesn’t happen in the future.”