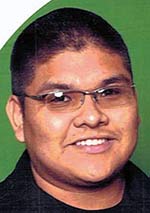 GALLUP — Funeral services for Brandon M. Smith, 24, will be held Friday, Feb. 22, at 10 a.m. at the Rollie Mortuary Palm Chapel in Gallup. Burial will follow at the family plot in Pinedale, New Mexico.

Brandon was born Oct. 5, 1994, in Gallup, into the Deeshchii’nii (Start of the Red Streak People Clan), born for Honágháahnii (One-walks-around Clan). He passed away Feb. 9, 2019, in Superman Canyon, New Mexico. Brandon graduated from Miyamura High School and earned the Board Excellence Award.

CHINLE — Funeral services for Frank Shirley, 72, of Lukachukai, Arizona, will be held Saturday, Feb. 23, at 10 a.m. at Our Lady of Fatima Church in Chinle, with Father Blaine Grein officiating. Burial will follow in Lukachukai.

Frank graduated from Chinle High School in 1967 and received an associate’s degree in business administration from Central Arizona College in Thatcher, Arizona.

He served in the U.S. military and was a Purple Heart and Bronze Star recipient. Frank worked as a mail carrier with the U.S. Postal Service and a caseworker supervisor with the Arizona Department of Economic Security, retiring in 2010 from Indian Health Service as a security guard. He enjoyed bowling, fishing, camping and tending to his livestock.

A reception will take place at the Lukachukai Chapter House following services. Summit Funeral Home is in charge of arrangements.

ST. MICHAELS, Ariz. — Funeral services for Shirley M. Smith, 73, of St. Michaels, Arizona, will be held Friday, Feb. 22, at 10 a.m. at the Church of Jesus Christ of Latter Day Saints in St. Michaels, with Scott Merritt officiating. Burial will follow at the Kinlichee community cemetery in Kinlichee, Arizona.

Shirley was bon Feb. 6, 1946, in Ganado, Arizona, into the Naaneesht’ézhi Táchii’nii (The Charcoal Streaked Division of the Red Running Into the Water Clan), born for Áshiihí (Salt People Clan). She passed away Feb. 15, 2019, in St. Michaels. Shirley received a bachelor’s degree in early childhood development/education and was employed as a child care provider for a variety of doctors at Tséhootsooí Medical Center in Fort Defiance.

She also worked for the Navajo Nation Head Start Program for 25 years and a variety of schools for disability in Chinle and Gallup. Shirley enjoyed baking food and cookies, attending family events, babysitting, teaching and traveling.

A reception will take place at Shirley Smith’s residence following services. Rollie Mortuary is in charge of arrangements.