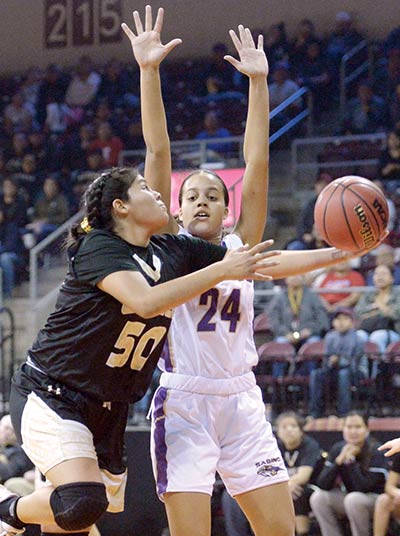 Chinle played Sabino in the 3A girls’ tournament Monday, but later found out the game didn’t count because Sabino was suspended.

According to the Chinle High School Vice Principal Jim Dowes, the Chinle Lady Wildcats are back in the Arizona Interscholastic Association 3A State Championship playoff.

Chinle played the Sabino Lady Sabercats on Monday and was defeated 55-43, but on Tuesday, the AIA disqualified the Lady Sabercats.

AIA officials stated in a Tuesday afternoon statement the Holbrook Lady Roadrunners were given a bye, which meant they were automatically sent to the play in the championship game against the Winslow Lady Bulldogs or the Page Lady Sand Devils.

But on Wednesday afternoon, Chinle High’s Athletic Director Shaun Martin wrote on Facebook the Lady Wildcats were put back into the playoffs.

“That is my understanding,” Dowes said on Wednesday during a phone interview. “They play Holbrook on Friday.”

Dowes said the the school district’s superintendent, Quincy Natay, informed him of the news.

Chile and Holbrook will play at 6 p.m.

Coaches had reacted with anger and confusion after the original announcement of Sabino’s disqualification, noting it would have a domino effect throughout the state.