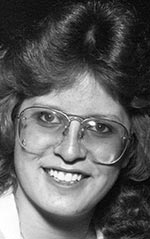 ALBUQUERQUE — Carla Jean (Hanley) Marques, 57, passed away Thursday, June 24, 2021, after a courageous battle with cancer, surrounded by family and friends. She was born August 1964 in Tuba City, to Mary and Wallace Hanley.

Carla graduated from Window Rock High School in 1982 and then moved to Northern California to attend cosmetology school. She was employed at Peerless Electric in Berkley, California. During this time, she welcomed her son, Jerry Jr., who was her everything, her love, her life. She then relocated to Albuquerque, where she spent the next 28 years.

The simple pleasures in life brought great joy to Carla. She enjoyed having all her nephews and nieces with her in her home where she helped raise them.

Carla always welcomed family and friends who were in need of help. She was an avid rock collector and had many rock gardens around her home.

Carla enjoyed watching game shows, fishing, camping, and was talented at beadwork. She enjoyed having friends and family over for cookouts, holidays and family functions.

Carla is preceded in death by her sister, Kim Hanley; and grandparents, Sistah and Max Hanley Sr., and Ruth Clayson-Wilson and Harry Wilson.

A Celebration of Life for Carla will be held at her residence.

Kody was a member of USTRC and various rodeo associations. He enjoyed horse training and participating in team roping and tie-down roping events.

Maxine received a master’s degree in education and retired as a teacher at McKinley County Schools District. She loved to travel and be outdoors with family.

Wilbur is survived by his son, Tyrone Jymm; and brother, Nelson M. Jymm.

Wilbur is preceded in death by his wife, Louise Jymm; and son, Daniel D. Jymm III.

Herman was born March 7, 1966, in Gallup, into the Tsi’naajinii (Black Streak Wood People Clan), born for Tódích’íi’nii (Bitter Water Clan). He passed away June 22, 2021, in Albuquerque.

Herman received an associate’s degree in welding in 1996 and worked as a welder instructor at the University of New Mexico-Gallup. He also worked for Myers Containers for three years in Portland, Oregon, UPS ground manager in Portland, F&S Trailers, journeyman welder, and owned/operated Father & Son Welding.

Herman was a USTRC team roper for Gallup High School and rancher who enjoyed beadwork and riding horses with his granddaughter Ayayat.

Herman is preceded in death by his daughter, Cory Rose Chee; and parents, Irene Rose and Billy Chee.

Donations can be sent via Zelle to Lena Chee.

Pvt. Pouncy graduated from Chinle High School in 2018 and enlisted in the U.S. Army in January 2018. She completed basic combat training and was a human resources specialist assigned to the Headquarter Company of the 1st Armored Division Combat Aviation Brigade at Fort Jackson, South Carolina.

Pvt. Pouncy was stationed at Fort Bliss in December 2019 to the time of her death. She served a short tour assignment to Camp Red Cloud and Camp Casey in South Korea.

Pvt. Pouncy enjoyed reading her bible, skateboarding, playing games on her Xbox, and spending time with her family.

Pallbearers will be the National Guard.