‘Heal the people, protect the sacred’: Dream leads to creation of jingle-dress project 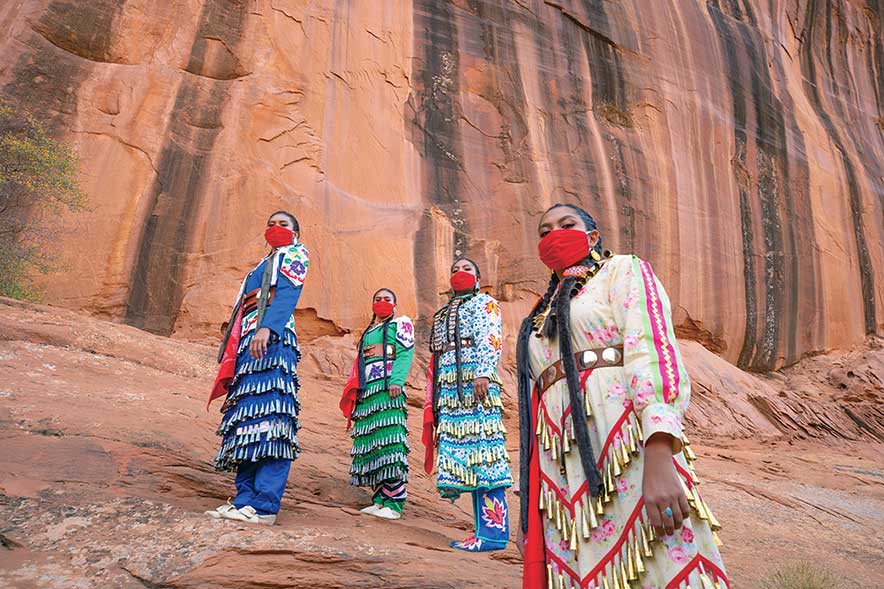 Courtesy photo | Eugene Tapahe
Diné women from left to right, Sunni Begay, JoAnni Begay, Erin Tapahe and Dion Tapahe. Sunni and JoAnni are from Pinedale, New Mexico, And Erin and Dion are from Window Rock. The two pairs of sisters, all of whom are Brigham Young University alumnae are part of Eugene Tapahe’s Art Heals: The Jingle Dress Project.

As the coronavirus outbreak moved across the U.S. last year, Eugene Tapahe had a dream he was sitting in a grass field at Yellowstone National Park when ‘ayání walked up on the horizon against a Big Sky sunset.

“I was sitting there. I started hearing jingles from the jingle dress,” said Tapahe, a Diné who’s a landscape-fine art photographer residing in north central Utah. “All these jingle-dress dancers came out onto the grass and they started dancing.”

The coronavirus was upending life around the world. Hundreds of thousands of people were getting sick and half of the world population was on lockdown and millions of people were filing for unemployment.

The virus took an incalculable death toll. The pandemic has taken parents, siblings, neighbors, friends, including one of Tapahe’s aunts, Emolind “Emily” Tapahe, in late May 2020.

“In my dream … I started feeling like there was hope,” Eugene Tapahe said. “I felt like I was healing from sorrow that I was experiencing.

“When I woke up it was so vivid that I shared it with my daughters (Erin and Dion) and my wife (Sharon), and that’s where it started.”

He told his family his dream was truly powerful that it needed to happen, inspiring a project called Art Heals: The Jingle Dress Project to help underscore the sense of loss and the raw pain felt across the world.

“And go out in the land and to heal the land and heal the people during this pandemic,” he said. “Because of the pandemic we knew we couldn’t get jingle-dress dancers to come out.”

Tapahe needed at least two more dancers in addition to Erin and Dion to represent not only the Four Worlds but also to represent Natives and Diné way of life.

Erin and Dion thought of their friends, Sunni Begay and JoAnni Begay, a pair of sisters, and asked them to join the project.

Tapahe said the project is more about the pandemic than it is about Native issues such as Missing and Murdered Indigenous Women and Girls and the mascot controversy. But the grassroots project evolved into a lot of things.

“(The project is) really impactful,” Erin said. “We didn’t really know what we were getting ourselves into. It’s been really rewarding in a sense … of community and kind of a place where people focus on healing and trying to find little bits of positivity through so much sorrow.”

In the darkest days of the pandemic, the Trump administration, state officials and even hospital workers raced against each other to get the necessary masks, gloves and safety equipment to fight the virus.

Erin believes no one had a pandemic playbook and if there was one, it wasn’t used.

“It was a lot of time being scared, trying to be productive,” Erin said, “so it was a really good opportunity to change that perspective. This is the healing part of the jingle dress … and sharing positivity.”

Dion said the project brings healing to people even through the photographs – in various places across the country like Valley of the Gods-Tsébii’ndzisgaii and Bonneville Salt Flats in northwestern Utah – Tapahe took and shared on social media.

“It’s been really hard to travel during the pandemic because we don’t want to meet people and we don’t want to risk being in contact with other people, so we’ve done extra precautions whenever we travel,” Dion said. “Dancing can bring healing to people. And it may not be a physical feeling, but it can be healing through spirit, and it can uplift a lot of people in that way.”

Spiritual power moves through the air when Erin, Dion, Sunni and JoAnni dance.

The sounds they make – a rattle mimicking falling rain – are significant.

The effect is amplified, becoming a healing, when the two pairs of sisters dance.

Sunni said that’s also healing for herself as a Diné woman.

“I’ve been able to connect more with my Native culture,” she said. “I’ve been able to connect more with the land when we go visit (places). You think about all the people … who’ve made that (particular) land since time immemorial; how things have changed and to reflect on how we are still here as Native women; and what I’m doing to honor my ancestors and honor my family.”

Sunni said she feels blessed to be part of the project and the Tapahe family because feeling isolated last year was more than being alone. It was a complicated emotion.

“This project (is) a blessing because it tries to build community and connects us with everyone else and that’s a big blessing,” Sunni said.

Erin and her sister, Dion, are Brigham Young University alumnae. Sunni is set to graduate from BYU. JoAnni, who’s a BYU sophomore, is currently on a mission for The Church of Jesus Christ of Latter-day Saints.

The dance itself began over a century ago when the daughter of an Ojibwe medicine man fell sick.

In his dream, the women taught him how to make a jingle dress, what songs to play and how to perform the dance. The women told him that making the dress and performing the dance would make his granddaughter well.

His dream came true when a healing dress was made for his granddaughter who regained her strength and performed the dance, curing her sickness.

Tapahe said the project’s goal is take the healing power of the Ojibwe jingle dress and share that healing with everyone and anyone through travel and images.

“It really brought a lot of indigenous people together in a sense that this project actually united them in a sense of giving them hope,” Tapahe said. “We’ve been trying to do it in a loving and healing way and so a lot of our images – really beautiful images – capture not just the girls’ images but also trying to combine it and unite it with the landscape.”

Tapahe said that’s part of what makes the Jingle Dress Project unique, to which people from all walks of life gravitate toward.

“And in that sense, it gave us a platform to be able to speak about Native issues,” Tapahe added. “All those Native issues have been able to be part of what we’re doing now in the sense that when we go out, we want to make sure that people know where we are and what Native land we’re on.”

Erin, Dion and Sunni said the project has also empowered Native American women from across the country.

“Our motto is ‘heal the people, protect the sacred.’ So when people ask me what do you mean by sacred, I say, ‘I’m talking about mother earth and I’m talking about women because they are our life givers that we hold sacred,’” Tapahe explained.

Tapahe said he’s seen his daughters, along with Sunni and JoAnni, grow into stronger Diné women since the project started last year. He said they’re proud of their Diné culture and proud to be Native women empowering their voices through the project.

“And inspiring and empowering the youth,” Erin said. “That’s really important. It just makes it so worthwhile to hear our songs and to be part of inspiring change for the younger generations.”