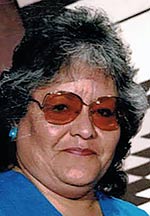 Lillian earned a bachelor’s and master’s degree in education, working as a teacher for the Gallup McKinley County School. She was also a teacher on the reservation for many years.

Lillian is preceded in death by her father, John Elliott.

Erwin graduated from Cuba High School in 2011 and loved to travel, stay home with his cats and spend time with his friends.

Erwin is preceded in death by his maternal grandfather, Ben Mestes.

A reception will take place at the Rabbit Ears Mesa on Pipeline Road in Torreon.

Daniels Family Funeral Services-Alameda Mortuary was in charge of arrangements.