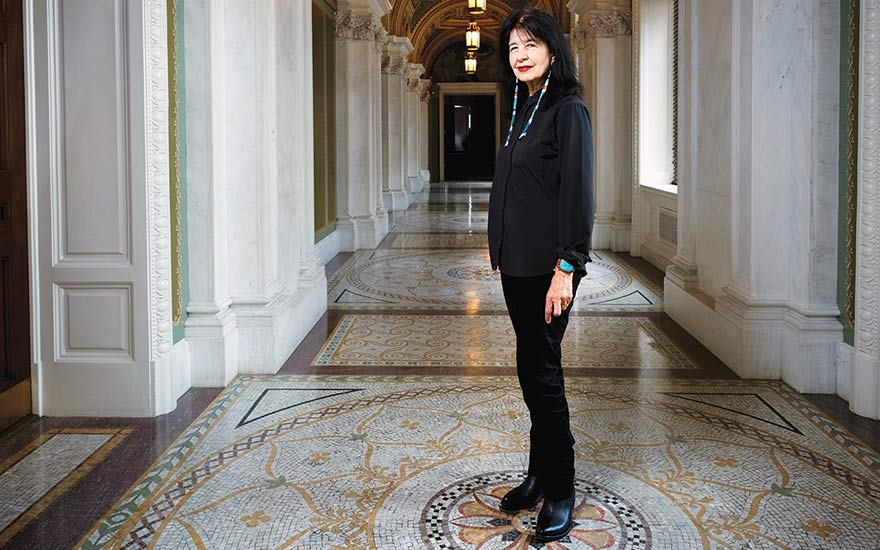 Joy Harjo, Muscogee Creek, in a hall of the Library of Congress earlier this summer. On June 19, she was named poet laureate for the United States. She is the first Native American to be selected for this position.

On June 19, Joy Harjo was named poet laureate for the United States by the librarian of the U.S. Congress.

A member of the Muscogee Creek Nation, she is the first Native American poet to receive the distinguished literary honor.

Harjo, 68, writes about her personal experiences as an indigenous woman, mother and grandmother. Two of her grandchildren are Diné.

“To her, poems are ‘carriers of dreams, knowledge and wisdom,’ and through them she tells an American story of tradition and loss, reckoning and myth making,” stated Carla Hayden, the country’s chief librarian. “Her work powerfully connects us to the earth and the spiritual world with direct, inventive lyricism that helps us re-imagine who we are.”

An honor for all (sub)

“To be given this honor means it is an honor for all of us,” Harjo said in a phone interview last week. “It’s about our people. We are absolutely central and crucial to the American story.”

Her four decades of work include “A Map to the Next World,” “Conflict Resolution for Holy Beings,” “Crazy Brave,” “For a Girl Becoming,” “How We Became Human,” “In Mad Love and War,” “The Good Luck Cat,” “Reinventing the Enemy’s Language,” “Secrets From the Center of the World” and “The Woman Who Fell From the Sky.”

Coming out in the fall is “An American Sunrise,” Harjo’s historical journey back to her people’s ancestral lands in the South.