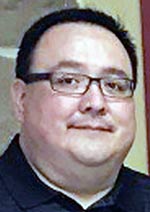 Eugene spent his first two years of life in New Mexico, and then lived in Minnesota for eight years, finally making a home in Aberdeen. He graduated from Roncalli High School in 1987 and attended Northern State University.

Eugene was an enrolled member of the Navajo Nation and was part of the Cheyenne River Sioux Tribe and the Cheyenne and Arapaho Tribe of Oklahoma. He was born for Hona’gha’ahnii (One Who Walks Around One Clan). He was employed at the Bureau of Indian Affairs for 29 years, and most recently as a legal instruments examiner.

Eugene enjoyed all Minnesota sports, especially the Vikings, watching Premier League Soccer, playing darts, going to movies and reading. He was also gifted at trivia and chess. His family called him the “Mayor of Aberdeen” because he always knew someone, no matter where he went.

Eugene was diagnosed with Multiple System Atrophy and kept a positive attitude throughout every new challenge. He was a friend to all and will be remembered for his wit and good sense of humor.

Eugene is survived by his mother, Leslie Anne “Tez” of Aberdeen; sister, Anne-Marie of Aberdeen; stepbrother, Fred Tso of Blue Canyon, Arizona; and many aunts, uncles, cousins and friends.

A gathering of friends, family and colleagues will take place at a later date in Aberdeen.

Arrangements have been entrusted to Skroch Funeral Chapel in Flandreau.

Franklin graduated from Gallup High School in 1976 and was employed with Chevron Coal Mine, retiring from Capstone Mining. He enjoyed riding his Harley, traveling the country, fishing and attending the PBR/NFR Rodeo in Las Vegas.

Franklin is preceded in death by his brother, Jerry Smith.