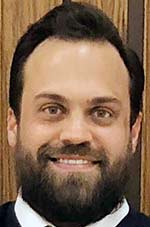 Kent’s first job was bagging groceries at Ellis Tanner’s Trading Post. He attended school in Gallup through 8th grade and graduated from high school in Mesa. Kent attended Arizona State University and Brigham Young University, where he graduated with a degree in foreign relations. He served a two-year mission for the LDS Church in Belgium, France, and Switzerland, and was fluent in French.

After which his passion for development soon took over and he found himself at the heart of re-vitalizing downtown Mesa. Kent was a beloved son, brother, friend, and colleague.

Most importantly, he was the best father and cherished each moment with his daughter. She was his absolute joy and the light of his life. Kent will be dearly missed as he touched the lives of everyone around him. He was everybody’s best friend.

Bunker’s Garden Chapel is in charge of arrangements.

He was a warehouse worker for Dean’s Distributor’s and Macy’s. Leo was a regular parishioner at Mission Delores Church and enjoyed spending time with family, powwows, casinos, cookouts, and traveling to Alaska and Arizona.

His favorite football team was the San Francisco 49ers and other Bay Area teams. After retirement, he took care of family and touched many people in the community with his kindness and generosity. Leo is survived by his wife, Katherine Hotch Shirley; sons, Randy Shirley and Julius Shanchez, both of San Francisco; daughters, Darlene Navarro of Daly City, Tricia Shirley of Daly City, and Lynn Truong of San Francisco; and three grandchildren and two great-grandchildren.

Venson was an artist who enjoyed drawing and loved to laugh.

Carmelita was born March 13, 1955, in Fort Defiance, into the Tó’aheedlíinii (The Water Flow Together Clan), born for Zuni.

She passed away Oct. 9, 2018, in Oakland, California. Carmelita attended Gallup schools and graduated in Oakland, attending Laney College in Oakland. She worked various data entry jobs and was currently working as a technician for Medical Transplant Services in San Francisco. Carmelita was the most caring, thoughtful, unselfish person that lived each day committed to work, family, pets, and living life with her lifelong companion, Joe Yanez.

She took extra time from work and life activities to provide loving care to her 93-year-old mother for two years.

Carmelita loved horse races, casinos, and had a gift for rescuing stray animals and reviving sick plants. She loved the city life yet always took the time to enjoy visits to see family and spent time with her prized possession — her daughter Michelle and grandchildren, Khesean and Jordan.

Carmelita also loved sports and played softball as a star pitcher for 25 years. She had a sense of humor that could bring a smile to anyone’s face in any situation. She will forever be in our hearts and thoughts until we all one day meet again.

Rayven was born Jan. 13, 1993, at the Gallup Indian Medical Center, into the Ta’neeszahnii (Tangle Clan), born for Naakai dine’é (Mexican Clan). His nali is Tsenabahilnii (Sleep Rock People); chei is Kiyaa’áanii (Towering House). He passed away Oct. 6, 2018, in Mesa, Arizona.

Anthony was born April 26, 1971, in Phoenix, into the Tl’ízí lání (Many Goats Clan), born for Kiyaa’áanii (Towering House Clan). He passed away Oct. 7, 2018, in Phoenix. Anthony graduated from Holbrook High School and worked in construction.