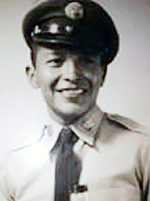 Frank was born into the Tl’izi lani (Many Goats Clan), born into Honágháahnii (One-Walks-Around Clan). He passed away Sept. 17, 2016, in Flagstaff. He was the only son born to Ruby Bigman and Scott Yellowman. He was raised as a sheepherder and herded sheep in Cedar Ridge along the Eastern Rim of the Grand Canyon.

Frank met the love of his life, Louise Yellowman, from Lupton, while attending Intermountain Boarding School and they were married in 1960.

Despite being a relocatee from the Bennett Freeze and forced to move to Tuba City, he seized the opportunity to meet the needs of many people of similar circumstances that were forced to relocate. He built a trailer park to house them and created employment, demonstrating examples of self-determination which was his philosophy and way of life.

Frank is now returning home to rest in peace forever where his elders made life. He is now with his mother Ruby and father Scott.

A reception will take place at the Bodaway-Gap Chapter House following services at 2 p.m.

Maggie is survived by her sister, Mildred Hubbard of Nazlini.

A reception will take place at the Family Life Center in Fort Defiance, following services.

BLANCO, N.M. — Funeral services for Gladys Stewart, 83, of Nageezi, New Mexico, will be held today, Sept. 22, at 11 a.m. at the Navajo Brethren in Christ Mission Church in Blanco, with Duane Bristow officiating. Burial will follow in Blanco.

Gladys was employed as a licensed nurse practitioner and certified nursing assistant, retiring from Fort Defiance Indian Health Service. She enjoyed bingo, crocheting, and spending time with her grandchildren and great-grandchildren.

Gladys is preceded in death by her parents, Frank and Lucille Wero; husband, Albert Stewart; and sons, Edwin Stewart and Franklin Stewart.

Daniels Family Funeral Services-Alameda Mortuary is in charge of arrangements.

GALLUP — Funeral services for Antoinette M. Largo, 53, will be held Friday, Sept. 23, at the Light House Church at 10 a.m. Burial will follow at the Sunset Memorial Park.

Antoinette graduated from Cottonwood High School in Salt Lake City, Utah, she attended one year of nursing school at University of New Mexico-Gallup Branch and Albuquerque Job Corps. She enjoyed spending time with her children and family.

Felicia attended Wingate High School and worked at Blue Spruce as a front desk clerk. She also worked at Avalons in Gallup as a busser and dishwasher.

She enjoyed playing volleyball and baseball and watching football, especially when the Steelers played. She also enjoyed being with family and friends, especially her daughters. They were the loves of her life. She loved to cook, clean, joke around, and make people laugh.

Felicia is survived by her father, Timothy Smith; mother, Madeline Smith; and daughters, Damika A. McCorkey and Skyrah A. McCorkey.

Yvonne is preceded in death by her father, Myron Denetdale; and mother, Virginia H. Denetdale.