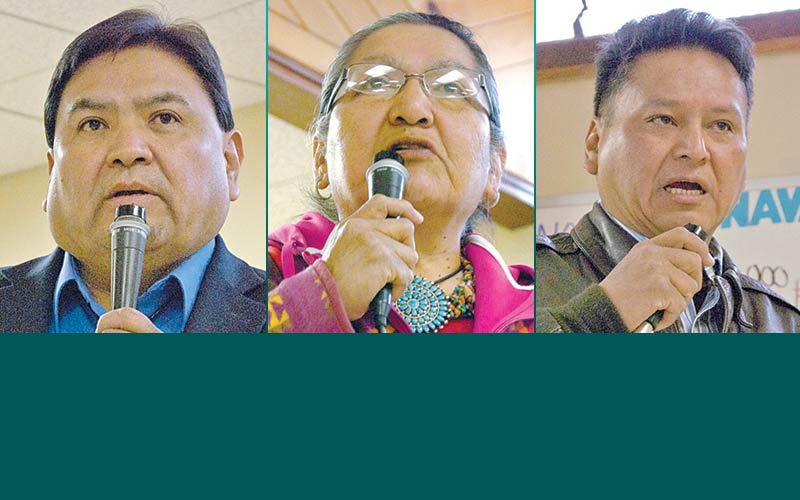 James Frank Adakai, Billy Goodman Jr., and Elizabeth Whitethorne-Benally are running for a seat on the 23rd Navajo Nation Council. All three candidates have filed their applications, vying to represent these chapters in north Western Navajo.

The position, previously occupied by former Béésh bąą dahsi’ání Jonathan Nez, will soon be filled. According to the Western Navajo Agency Election Office, a special election for the NOST chapters will take place on May 26. There is no timeline on when the delegate-elect will take office.

A story is often told at times like this – times when Diné voters are choosing among candidates with significant political experience and those who are barely experienced but maybe more compelling alternatives.

Over the weekend, the Navajo Times followed the candidates on their campaign trail and learned more about the contenders running for office. 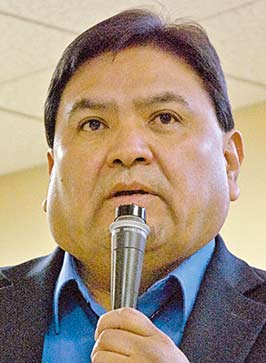 In Rainbow City, Utah on May 15, Adakai briefly introduced himself to a quorum, making known his clans and his family of five. He stood before his constituents that day long thought unthinkable for another few years. And he stood there with a message of hope and opportunity.

Standing before the quorum, Adakai was leadership at its best.

“When you’re holding a position, you’re the overseer as well as the matriarch and the patriarch of a community,” he said in Navajo. “All of us are in unfavorable circumstances, that’s the reason you don’t belittle.

“To be a leader, you’ve to be trusted. You’ve to advocate,” he continued. “Leadership is about preliminary work and logic. I enjoy it. I’ve procured the knowledge and I want to help you.”

At his home chapter of Oljato two days later, it’s no doubt the people saw Adakai as a leader who delivers – whether it’s snooping around in the Utah Navajo Trust Fund or planning for infrastructure.

Adakai believes his work is complete at the chapter level. He’s also worked for the city of Sedona, Ariz., the counties of Coconino and Yavapai, exerting himself on zoning ordinances as well as controlling and planning development; and he has worked for Kayenta Township when hotels and restaurants were being planned. Currently, he’s working for the Navajo Nation.

Thanks to scholarships from the Nation, Adakai has two bachelor’s degrees – political science and sociology – and a master’s in public administration.

“I want to give back,” he said. “I want to help (the) community (of Oljato) and the other three chapters. I believe I can do it.”

If elected, his top priorities include economic development, natural resource, and public safety.

Nelson Yellowman osf the San Juan School District Board on May 17 endorsed him. 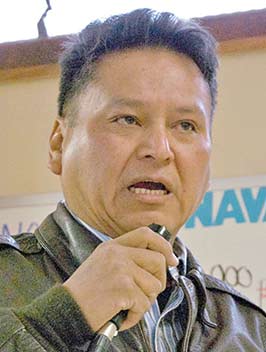 Billy Goodman could be the next delegate for the NOST chapters, but would his lack of experience matter to voters?

Goodman became a politician on May 15, taking up the challenge. On day two of his campaign, he stumbled over his words but presented himself as an airman turned politician voice of reason.

Now a week into his campaign, the Cross Roads-Ts’ahbiikin native has gotten his message through that if elected, he’d lead the NOST chapters in the same matter.

“We need someone from (the area) to take up arms for us in Window Rock,” Goodman said in Navajo.

Alluding to the nation’s armed service, Goodman spent 24 years in the U.S. Air Force and in the Utah Air National Guard.

But don’t let his background in the Air Force mislead, he has many ideas for the area.

Over the weekend, Goodman set an example with core values: Integrity, service before self, and excellence – virtues and values that exist for all members of the Air Force family. He incorporated the concept of a commitment to learn, assess risk, and a continual improvement for the NOST chapters.

“I don’t plan on making it up as I go along,” he said in English. “I plan on using organizations, I plan on using you, the chapters, to get the goals accomplished, to remedy everything that ails you.”

“I don’t make promises because I’m going to break them,” Goodman continued. “The outcome might not be what we anticipated. You always weigh your options, always weigh the resources that you get … sometimes your priority isn’t high enough.”

Goodman said that he can step into his learning model and immediately apply it, which he started in the service where he’s put forth the extra effort to exceed the highest standards that were placed upon him.

He joined the Air Force after seeing that he wasn’t relative to college. Overwhelmed by the roster of possible careers, Goodman said he threw a dart, metaphorically, at a career field that seemed interesting: Electronic warfare.

“I picked the best job (and) it challenged me to no end until I hung up my uniform (in 2008),” Goodman stated in his biography submitted to the Navajo Times.

Though his credentials would be an issue, if elected he’d arrive at the Council Chambers with less executive experience than most of his predecessors, but possibly more competence in problem solving than most.

Goodman is one of the Diné warriors, a common man who stands for commonsense and truth. And not to mention, he stands firm on bringing the youth home.

Goodman is the son of Billie and Mary Goodman from the NOST area.

“The ultimate on my agenda is to bring back our youth to our people,” he added. 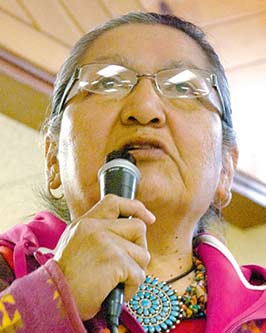 As for the woman with the killer black boots, Elizabeth Whitethorne-Benally is a steadfast scion of the Sunshine Springs.

Originally from Didzétsoh near Black Mesa, Ariz., Whitethorne-Benally is an artist and a welder. She is also the sister to promienent artist Baje Whitethorne Sr. and politician Hank Whitethorne.

She’s the current president for Shonto Community Governance, the president for NOST, and is a partner of the Arizona Office of Tourism, among others. And if elected, Whitethorne-Benally intends to move náás (moving forward) by erecting new senior centers and homes using alternative building materials; bringing economic development; proposing scenic preservation, solar energy, and wind power to the masses; as well as improving roads, among others.

Whitethorne-Benally is an inspiration for women trying to break through the glass ceiling and for individuals devoted to serving the people. And she is an individual who does not flinch.

“My vision and experience is going to expand,” she said in English. “I believe in hózhǫ́ and náás – my way of thinking.”

She began her chapter work in Shonto 15 years ago as a volunteer, doing paperwork and later becoming the administrative assistant. Now, she is a candidate who’s campaigning as a crusader for growth.

Whitethorn-Benally is Lók’aa’ Dine’é (Reed People) and is born for Hashk’ąą Hadzohí (Yucca Fruit-Strung-Out-In-A-Line Clan. Her maternal and paternal grandparents are Tł’ízíłání (Many Goats Clan). She is married to Kenneth Benally, who is Tábąąhá. Together, they have one daughter and one granddaughter.

Recently, Whitethorne-Benally’s critics argued that she was cut from the same cloth as Hank.

“I was told that I might be like him and that I might also start a controversy,” Whitethorne-Benally said in Navajo. “Our philosophy is completely different. If you have questions, you have to ask him. We’re not under the same impression.”

She said if she indeed supported Hank, she would have supported him during the court hearings in Window Rock.

“I wasn’t there, you didn’t see me there,” she said respectfully.