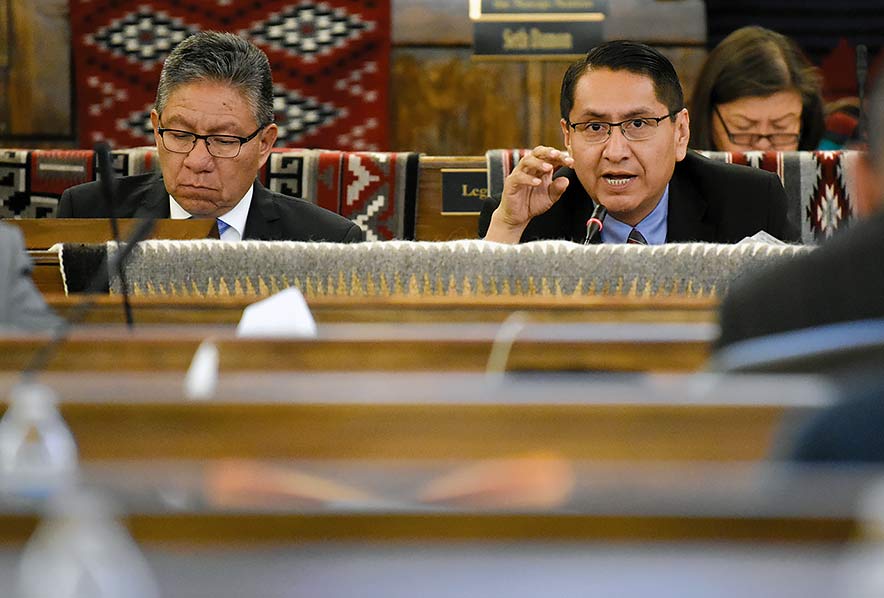 A year into the Jonathan Nez-Myron Lizer Administration and 24th Navajo Nation Council, the division between the two branches was palpable during the first day of Council’s Winter Session.

What was supposed to be a time for Nez, First Lady Phefelia Nez, Lizer, and Second Lady Dottie Lizer to give their State of the Nation address to Council was overshadowed by talk of a restraining order against the Council if it were to act on two veto override bills.

“Are you currently filing the restraining order on the 24th Navajo Nation Council as we speak?” asked Council Delegate Vince James after Nez gave the 20-minute State of the Nation address.

Nez responded by saying his request to work together is being honored so “there shouldn’t be no reason to do a restraining order, is there? I don’t think so. No.”

“No. No. No,” responded Nez after the delegate asked a second time. “I heard the debate earlier. I did have a request to Council to not consider those two override bills. I hope we can honor that because that’s the spirit of working together. Not overriding any legislation, let’s talk these things out.”

The unfiled temporary restraining order being discussed was given to the Council right before Winter Session had convened. The petitioners for the order were listed as Nez and Lizer and the respondents were the 24th Navajo Nation Council, Speaker Damon, and Council Delegate Kee Allen Begay. This caused Council to go into executive session to discuss the situation with Chief Legislative Counsel Dana Bobroff, but even after this executive session delegates continued to openly discuss the documents, prompting a warning from Bobroff not to divulge her advice.

What brought about this restraining order were two legislations sponsored by Council Delegate Kee Allen Begay. One was to amend the master plan of operation for the Diné Uranium Remediation Advisory Commission, and the other was to adopt the “Accessible Public Restrooms Act.” Both resolutions had been vetoed by Nez in the previous regular Council session.
Along with the restraining order was a letter from Nez stating that Begay had missed an important aspect of Navajo law when he tried to get these overrides.
“In Title II … the law reads, ‘The President’s veto shall not be subject to an override by the Navajo Nation Council after the end of the next regular session of the Navajo Nation Council following the session in which the legislation was first passed by the Council,’” the letter stated. “I am open to a meeting with Navajo Nation Council members to discuss a suitable change to the Diné Uranium Remediation Advisory Committee and to address access to public restrooms that will be clear and will not expend significant resources.”

The petition for a temporary restraining order stated the order is necessary to maintain the status quo until a hearing is held on the preliminary injunction.

“The petitioner has a protectable interest in ensuring that presidential actions taken by him retain the full force of Navajo law,” stated the order.

Delegates weren’t happy with Nez’s letter or the possibility of being taken to court. Council Delegate Daniel Tso tried to prevent Nez and Lizer from giving their State of the Nation report because he saw it as only press releases brought together, but that failed. Even though the first day of Council is usually reserved for reports and not legislations, Delegate Carl Slater tried to move up the override bills and act on them before the address was given. This attempt failed as well.

“I don’t think we would be in this situation if we weren’t presented with documents that said the President was going to issue a temporary restraining order to prevent the Council from considering legislation,” said Slater. “All this talk of working together is good. I’ve seen numerous of my colleagues go across the street (to the President’s Office), as well as myself. But when my colleagues and I are presented with a temporary restraining order before Council, it seems like a political stunt to prevent us from thinking clear.”

If the Council had overridden the vetoes, it wouldn’t have been the first time. In December a special Council session was held and four override legislations, including a $1.5 billion debt ceiling increase for Navajo Tribal Utility Authority, were approved during that session. Through Title II, if there is a chance of an override, the President is afforded a chance to explain the reasoning behind his veto at Naabik’iyati’. But, the committee only allowed him to explain his reasoning for two of these four vetoes before they had the special session.

In regards to Begay’s two override legislations, Nez explained, they are too late under Navajo Nation law.

“Our interpretation was: You get only one session to do this,” said Nez. “If the opportunity was given to do an override, then it shouldn’t end up on the second session, which would’ve been this winter session. So those two overrides would’ve been invalid.”

He further explained if Council believes “regular session” means the four quarterly sessions, then the two recent overrides would be valid, but that would mean the previous four overrides, which were approved in special session, are invalid, so Nez wanted to have the courts clarify this.

“The supreme court interprets the law,” said Nez. “Council legislates the law, and we execute the law. We just wanted a clarification. We said the Council shouldn’t consider these legislations until the court clarifies it. We appreciate Kee Allen Begay; he withdrew those legislation in the spirit of collaboration and working together.”

Resource and Development Committee Chair Rickie Nez had first asked to go into another executive session with Jonathan Nez and Lizer, but if that were to happen the president and vice president could not be forced into the executive session; they’d have to agree to go in voluntarily. So instead, Rickie Nez suggested the leaders refocus, move forward, and work together.

“We heard the president say that he will meet with us,” said Council Delegate Edmund Yazzie. “Mr. President, I hope you keep your word to meet on that. Lets continue to move forward.”