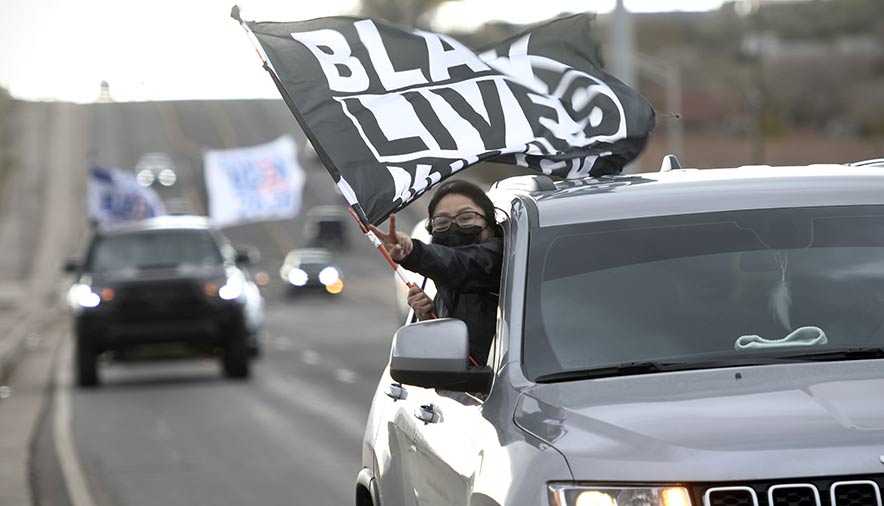 “Tribal communities did this,” said Pratt to the Navajo Times in a phone interview. “We got so much shout-out. Just the attention that has been paid to Indian Country in this campaign is incredible and it’s a real testament to the power of the Native vote.”

Pratt, who was previously the director for the Navajo Washington Office and Chief of Staff during the Russell Begaye-Jonathan Nez administration, was named Biden’s Tribal Engagement Director in July. 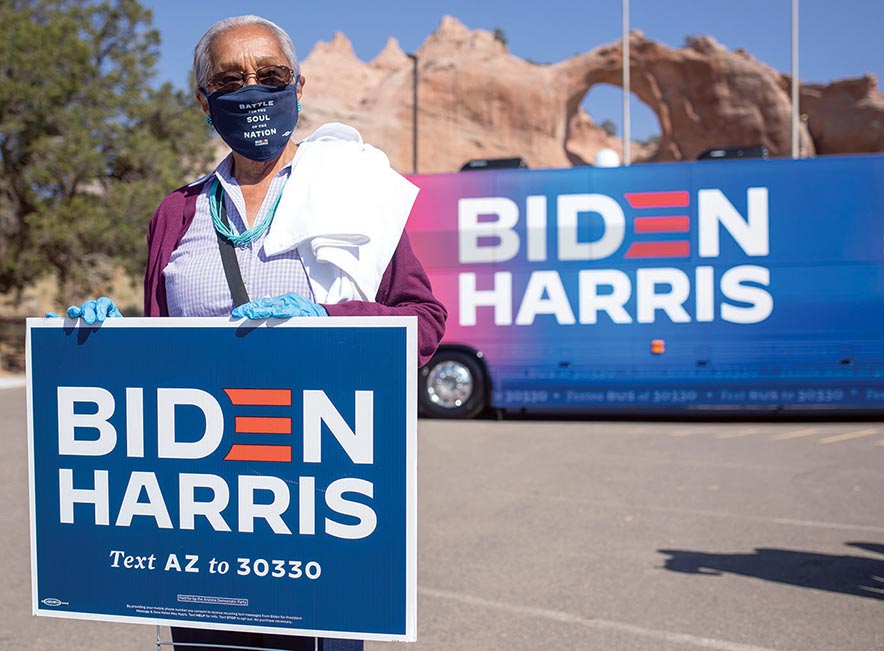 Biden supporter Jane Baloo poses in front of Biden’s campaign bus Wednesday, Oct. 7, 2020, as he made a campaign swing through Arizona.

“Historically, Native voters have one of the lowest voter turnout rates,” said Pratt. “But the power that we have when we show up, and to do this during a pandemic of all things, it was a testament to how important this election was … to many people.”

Native voters ranged from annoyed to livid at CNN’s inclusion of the Native vote in the “Something Else” category in their breakdown of election results by race, while White, Black, Asian and Latinx Americans were named. Pratt, whose job was to focus on Native voters for Biden campaign, said it amounted to “marginalizing for tribal communities who are already marginalized.”

“It went further to invalidate who we are as people,” said Pratt about the “Something Else” category. “Our education system is so woefully inept at educating on true tribal issues. A lot of people aren’t even aware that tribes exist, that we have sovereign governments, so by not spelling who this “Something Else” was, it just went to further say these people don’t exist or something of that sort.”

Under the Barak Obama-Joe Biden administration, Navajo attorney Charles Galbraith worked as the associate director of public engagement and intergovernmental affairs, which included liaising with Native Americans and tribal governments, and before that served as a deputy associate counsel for Presidential personnel in the White House.

“It was one of relief,” said Galbraith of his reaction when he heard the news of Biden and Harris’s win.

Describing the scene in Washington, D.C.,Galbraith said people are “screaming and dancing in front of the White House.”As someone who has worked with Biden, Galbraith predicted a lot will change quickly once Biden and Harris take office.

In contrast to President Donald Trump’s lack of response to COVID-19, which has claimed the lives of 586 Navajos as of Friday, Galbraith said Biden will implement his plan to respond to the pandemic.

“He is a compassionate leader, dedicated his life to public service,” said Galbraith. “He is the right person to lead our country at a very difficult time right now. You know what to expect with Joe Biden: It’s going to be sound leadership, responsible decision-making, and someone who will put science and facts above the politics.”

Returning back to Arizona and the Navajo Nation during Election Day, Galbraith was surprised to see how many Republican Navajos there were.

“I’ve worked a lot of elections on the Navajo Nation and other reservations and I’ve never seen a blatant and proud display of Republican support,” said Galbraith. “The vote totals came in and it was very clear the Navajo Nation was overwhelming in support of President-elect Biden.”

Council Delegate Edmund Yazzie, a Trump supporter, said neither the Democrats nor the Republicans should underestimate Navajo Republicans and the growth of the party among Navajos. A staunch supporter of the Second Amendment and against abortion, Yazzie said he isn’t upset or angry over Biden’s win, he just hopes Biden will work with Republicans in a non-partisan fashion.

“It was a tough fight,” said Yazzie. “Now all we have to do is move forward with trying to working together. The Navajo people, there’s a lot of Republicans too, they’re growing. We can’t just say ‘Democrat.’”

Yazzie said one Trump’s downfalls was he didn’t take the pandemic seriously enough.

Galbraith said not to forget what a groundbreaking moment it is for Harris, who will be the first woman, first African-American and first South Asian-American elected as the Vice President of the United States.

“My husband and I are in tears celebrating this historic day because of Kamala Harris,” said Alray Nelson, Diné Pride Executive Director. “Our country is sending an inclusive message that we choose love over hate, truth over lies, and hope over fear.”

“The people have spoken and change is coming to America,” stated Nez, a Democrat. “Now that the hard-fought campaign and election have passed, we have to come together, heal, and unite to move tribal nations and the country forward on a positive path. The First Americans of this country, including a large majority of Navajo voters, had a major impact in the outcome of the presidential election in several swing states – that needs to be recognized and acknowledged by all.”

Added Damon, “The Navajo Nation recognizes the positive developments made over past administrations relating to tribal sovereignty, and we look forward to working with the Biden-Harris Administration to further the policy changes and legislative priorities that will strengthen tribal self-governance.

“We invite the White House and federal leadership to meet with us on the great Navajo Nation to begin charting a steady path forward under the new administration.”

The Navajo Nation’s highest-placed Republican, Vice President Myron Lizer, was withholding his congratulations until the vote tallies are official.

“There seems to be impropriety in these states in question,” Lizer said, referring to the swing states that narrowly went for Biden. “Once those are cleared up (and) an official conceding speech offered from whomever has the lesser electoral votes — until then, it’s still anyone’s election. … Praying for a fair and transparent outcome at this moment.”