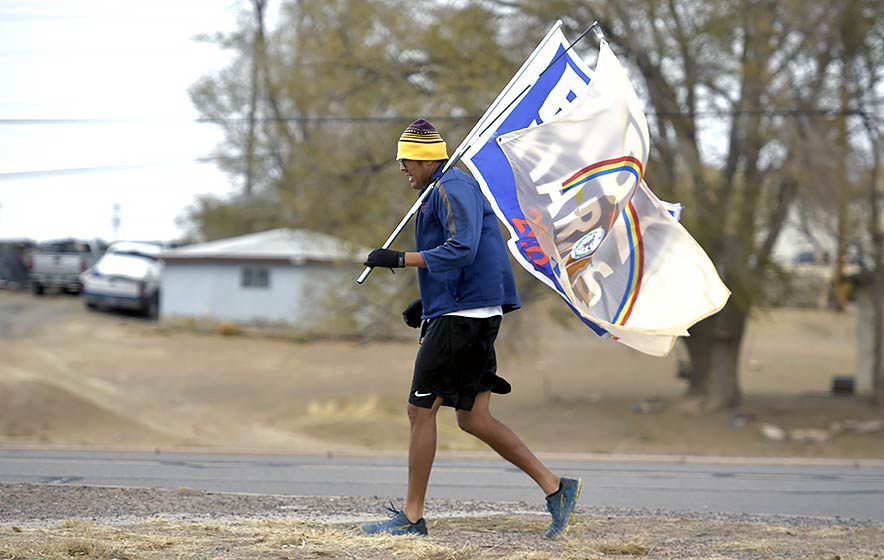 Navajo Times | Donovan Quintero
Terry Yazzie, 41, from Window Rock, ran along Highway 264 with a Biden/Harris flag to celebrate Joe Biden's win Saturday. “I am happy,” Yazzie said. “People are partying and cheering in all the big cities, so I said, ‘I might as well run with this down here.’”

Terry Yazzie, 41, from Window Rock, wasted no time getting on his running shoes to celebrate the news he’s been waiting for since Tuesday night.

“I am happy,” Yazzie said, a Democrat. “People are partying and cheering in all the big cities, so I said, ‘I might as well run with this down here.’”

Despite a windy morning with a fall drizzle, Yazzie grabbed the Navajo Nation flag and the Biden/Harris campaign flag and went running along State Highway 264.

President-elect Joe Biden issued a statement on Saturday following the news that he secured more than 270 electoral college votes.

“I am honored and humbled by the trust the American people have placed in me and Vice President-elect Harris,” Biden stated.

Biden said it was time to stop “the anger and harsh rhetoric” and come together “as a nation.”

President Donald Trump also issued a statement on Saturday but did not say he was conceding.

“Joe Biden has not been certified as the winner of any states, let alone any of the highly contested states headed for mandatory recounts, or states where our campaign has valid and legitimate legal challenges that could determine the ultimate victor,” Trump said, adding the election was “far from over.”

Yazzie said he hopes the new administration will put more focus on Indian Country, create better health care for the Navajos, and “bring back scholarships.”

And to the Navajos who supported Trump, he said, “When he was elected four years ago, they told us to ‘suck it up.’ So right back ’atcha. We dealt with four years of it, now they have to deal with it too.”

Yazzie said he may run again on Saturday evening to continue celebrating Biden’s and Harris’ win.