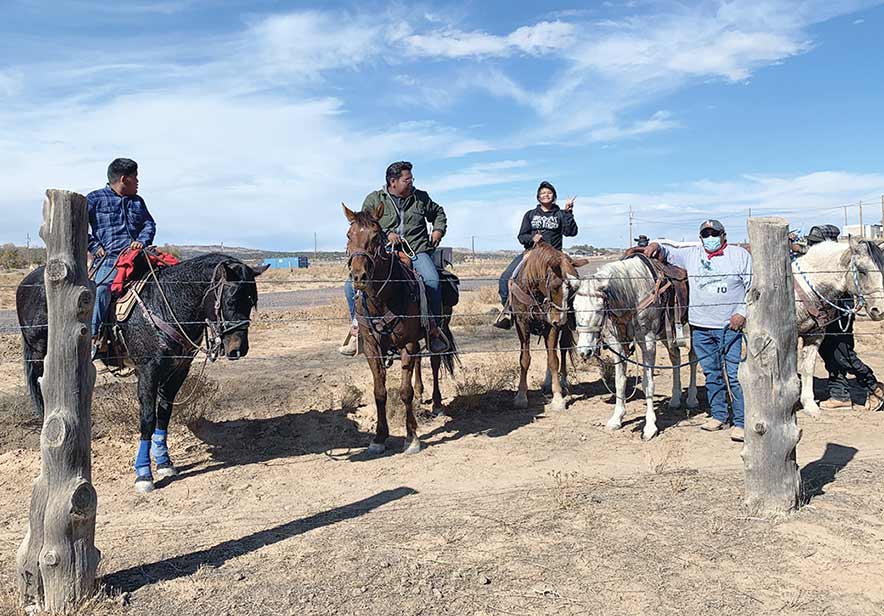 While President Donald Trump saw some of his staunchest support in the country’s rural areas, that didn’t hold true in the Navajo Nation, or at least in the most remote regions of Central Agency.

Most voters emerging from the polls Tuesday said they voted a straight Democratic ticket.

“I’m a poor man, so that’s where I belong,” professed Jason Begay, 59, of Hard Rock Chapter, reflecting the opinion of many of the voters.

Generally election day in the rural chapters is a homecoming of sorts, with people driving in from all over to cast their votes, sample stew and fry bread from the candidates’ tents and hobnob with friends they haven’t seen in a while.

Tuesday’s election day, under a host of COVID-19 restrictions, was grim by comparison. Poll workers took voters’ temperatures, made sure they were wearing masks and spaced them six feet apart in line.

While some folks gossiped in the parking lot, most just got in their car and left after filling out their ballot.

Steve Blackrock, 60, and his adult children traveled 20 miles from their remote homestead to the Forest Lake Chapter House, and everyone in the car was voting blue. It had been a tough year for the family, and they feel the current president is partially to blame.

Blackrock’s son Steven Jr., 26, had lost his job as a server and bartender in Phoenix and had to move back in with the folks.

“At first, we were furloughed for two weeks,” he recalled. “I thought, ‘Oh yay! A two-week vacation!’ Then it turned into two months, and then six months. It stopped being fun a long time ago.”

Steven Jr. believes all the trauma could have been prevented if the Trump administration had taken the virus more seriously early on, and he’s furious with the Republicans for blocking the second round of individual COVID relief checks.

“This country is built on the working class,” he said, “and we’re really suffering.” 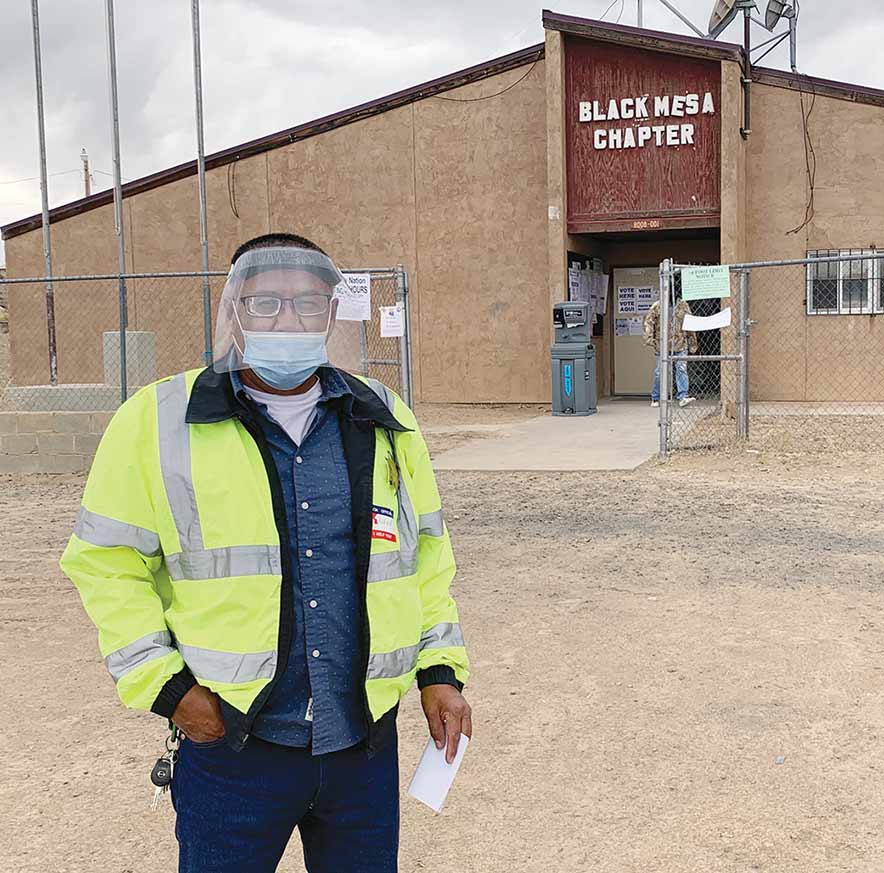 Navajo Times | Cindy Yurth
Richard Sage has volunteered as a poll worker for over 20 years. He says he sees it as a continuation of his military service, helping to preserve democracy.

Steve Sr., a retired coal miner, said the family has had to rely on the food boxes brought to the chapter by private and public relief groups.

“Shout-out to them,” he said. “They helped me feed my family.”

“I feel like (Joe) Biden and (Kamala) Harris are for equality,” she said. “They believe climate change is real. Their values align with mine.”

Steve Sr. said voting Democratic is a family tradition that started with his parents, but he wouldn’t have voted for Trump even if he were a Democrat.

“To me a leader has to exhibit the values and qualities of being a leader,” he said. “After seeing (Trump) in office for four years, I don’t believe he has any of those qualities.”

He wasn’t the only one whose vote for Biden was mostly a vote against Trump.

“We want to see a new president,” declared Sarah Bekay, 67, of Piñon Chapter. “Our president right now is not very good, looks like. Let’s see what Joe can do.”

“I feel our country’s headed in the wrong direction,” said Frank White, 70, of Black Mesa, noting he voted “blue wave across the board.”

It was also a lesser of two evils thing for Marvin James, 45, of Hard Rock, who thinks Biden is “a lot better than our current president,” but admitted that’s not a high bar.

There were a few Trump supporters in the mix, including 55-year-old Daniel Furcap of Hard Rock, who thinks “a lot of progress took place since he’s been in office.”

Vance James rode 12 miles on horseback to Piñon to cast his vote for Trump, saying the Republican candidate reflects his “traditional values.”

Like Furcap, he was considering voting blue in the state races, however. 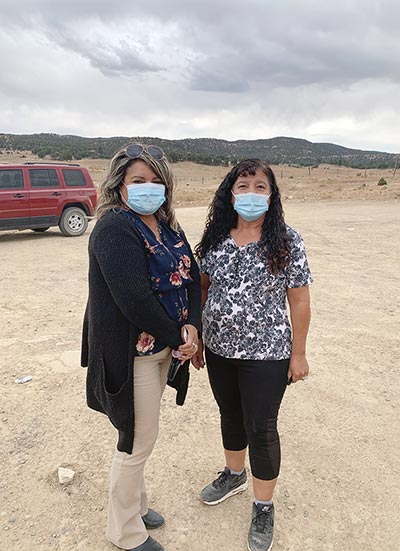 Navajo Times | Cindy Yurth
Sisters Sharon Vasquez, left, and Deborah Martinez canceled each other out at the polls, but remain friends.

Sisters Deborah Martinez and Sharon Vasquez, of Tuba City, had driven their mother to her home chapter of Black Mesa to cast her vote. The sisters had canceled each other out at the polls, with Vasquez voting for Trump and Martinez for Biden.

“He (Trump) is making us feel like we’re in Russia,” Martinez declared, adding that she doesn’t like his comments about Mexican immigrants — which include the sisters’ father.

Vasquez countered that she’s not fond of Trump as a person, but “he gets things done.”

While some families have found themselves estranged over varying political beliefs, Martinez and Vasquez say that won’t happen to them.

“We can talk about it,” said Martinez. “We don’t get into a fistfight or nothing.

“She has a right to her opinion,” she added of Vasquez. “It’s called freedom of speech.”