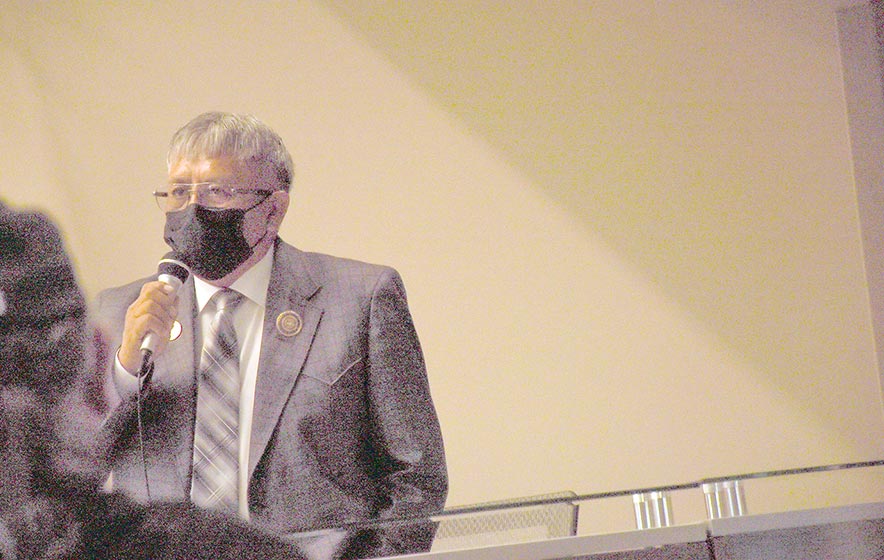 His most outstanding achievement in the Council was obtaining funds for the Western Navajo Pipeline project to convey water to the 18 Western chapters.

The Navajo Nation Council, on July 21, 2021, passed legislation that would allocate $58.2 million in Sih Hásin Funds to the Water Management Branch for the project’s first phase. The money would cover the design and construction of multiple waterlines and water and wastewater treatment phases.

“We, the Navajo people, have no water rights,” Dá’deestł’in Hótsaa Delegate Paul Begay Jr. said. “But even though we will get water.”

During Tonalea-Red Lake’s District 1 Council forum conducted in Navajo on Sept. 23, Begay, who’s running for reelection, said the closure of Navajo Generating Station left behind a rich potential of 34,100 acre-feet of water for other uses each year.

The Upper Basin Compact allotted 50,000 acre-feet of water to the area above Glen Canyon Dam. Although the Navajo Nation wasn’t represented at the negotiating table, it later made several agreements under the compact’s terms, which made the construction of the power plant possible.

The tribe, in 1968, resolved to dedicate 34,100 acre-feet of water to the power plant for 50 years – provided that the water would be returned to the Nation for their exclusive use and benefit.

Begay said the remainder (15.9 acre-feet) of the 50,000-acre-foot allotment should be used for the pipeline project.

Begay said he often wonders if he’s ineffective as a delegate because people criticize him for it.

“But work is still being done,” he said. “It may look like I’m not doing anything, but work is being done and being planned.”

Begay identified several activities underway in Western Navajo, such as road repairs on routes 16 and 21T. He also identified finished projects, such as the Tonalea Chapter House and the Wildcat Peak Phase II.

“More than three years ago, I said to my constituents that I would not promise anything,” he added. “The only thing I promised was that I would work hard. And to this day, it’s still like that.” 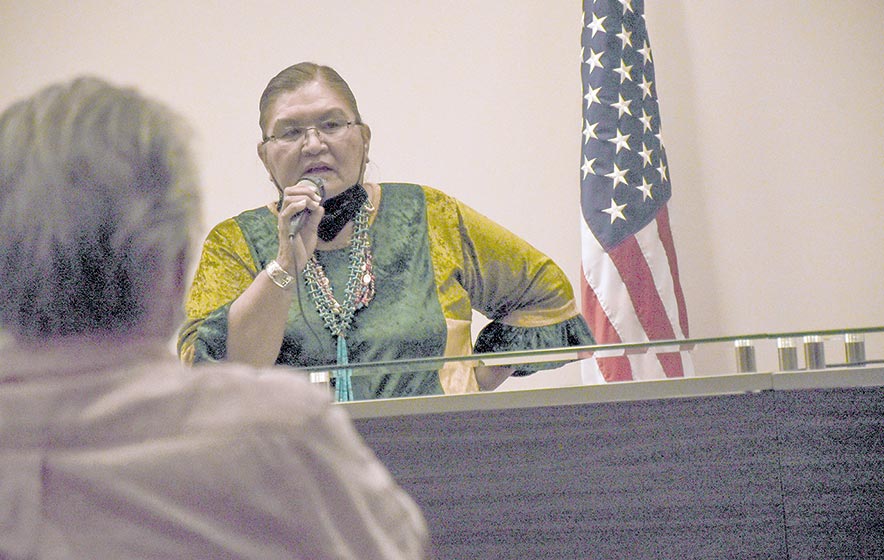 While most Americans use dozens of gallons of water daily, her family uses only a little.

Helena, who’s not related to Paul, said she knows running water would be a luxury.

“Our relatives dream of – laanaa – having running water,” Helena said. “Some of them in the last few weeks received electricity.

“We’ve been living like this for years and no one’s noticed,” Helena said. “Our elders want basic amenities–running water, electricity, and indoor plumbing.

“I rove about the chapters and its people who talk about their issues,” she said. “Their stories trigger the heart and mind. I may not seem like I’m not fit to be a lawmaker, but I have prayers, and I will use that.”

The moderator, Henry Fowler, the Department of Diné Education board president, asked Helena and Paul several questions, including reasons they stepped into leadership roles. Both candidates have hands-on life experience and the ability to get things done, and they have strong characters and the integrity to do what’s right instead of what may be prevalent.

Paul said he’s worked for the Salt River Project for nearly 10 years, during which one of his tasks was attending Council meetings in Tsébigháhoodzání, listening to saad bee ‘ádánahodiit’aahí become law.

“Going to the Navajo Nation Council Chamber for eight years, I learned how the Council works and how a delegate works,” Paul said. “When a presidential administration changes and an election takes place, legislations that are alive all die on Dec. 31 at midnight.

“That means the projects in the works are gone,” he said. “For instance, I had to find the legislation for a new Tonalea Chapter building and redo it with the 164-review process––that’s how things work.”

Paul said he can continue to do his job.

Helena declared her candidacy for the District 1 Council seat after many people, including the older men and women she helps, asked her to run for office.

“My mother, the late Helen Nez Sage, taught my siblings and me k’é and to carry it throughout our lives,” she said.

Helena believes all politics are local, but state and federal governments affect people’s daily lives in numerous ways, even the senior centers across the Nation.

“And I work with state leaders in that small way,” Helena said. “I often request things for our elders because I know their needs.

“I make myself available to talk with them, and I’m doing that,” she added.

Paul says a lawmaker usually inherits a relationship with leaders in Arizona, New Mexico, Colorado, and Utah, among issues on a to-do list. A new lawmaker must discuss relations and how they might change during the presidential administration.

“And we have to work together with them,” said Paul, who’s part of nine different Council standing/subcommittees, including the State Task Force.

“We know the laws, regulations, and policies. Each of these states, they’ve different laws,” he said. “Learning and knowing all that, it’s not difficult. I’ve done this for more than three years.”

Some people believe wild horses are an out-of-control problem in Diné Bikéyah, and ranchers and activists conflict about their fate. They believe reducing the impact of horses roaming the lands is an increasingly urgent as worsening droughts and warming temperatures intensify.

Both candidates were asked how they would address the widespread and overabundant feral horses and burros wreaking havoc on the rangeland ecosystem and exacerbating invasive establishment.

Paul said, as a result, water resources are impacted, and wildlife species are threatened.

“Feral horses, łį́į́’ da’ałchiní, don’t belong to anyone,” Paul said. “We at the Council level need to work with the Department of Agriculture and the Navajo Land Department, but it must come from the chapter level.

“Make a resolution, saad bee ‘ádánahodiit’aahí,” he said. “Put it in resolution form and vote on it. I can’t stand here and say I’ll do this for you, doo bihónéedząąh dah.”

Helena said Diné don’t travel by horses anymore as they did for transportation, work around the homestead/dá’ák’eh, herding, and ceremonial purposes.

“Maybe we need to ride our horses again to eliminate that,” Helena said.

“This is a prime opportunity,” Paul said. “Two billion dollars have been allocated to us, and we’ll use it but not with a new (presidential) administration because once a new one is in office, it’ll take time to restart everything.”

The Navajo Nation received about $1.86 billion from the federal coronavirus relief package last May and approximately $217.91 million the following August.

Helena said the Nez administration is biased and believes lawmakers are obstructing the people’s money in Tsébigháhoodzání until the election came around.

“Wake up!” Helena shouted. “This is what’s happening to us! They’re taking advantage of us! The money allocated for powerlines, that’s our money! That belongs to us!”