Educator Dolly Manson has devoted her life and career to teaching, perpetuating and preserving Navajo language and culture. 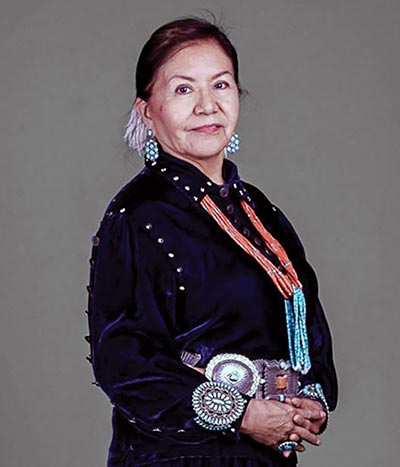 She is now running for Navajo Nation president because she believes it’s time for a woman to step in and restore harmony.

Hozho Náhodoodleeł, or “may beauty be restored,” is the theme of her campaign, she said.

“We want to restore the people,” she said. “We are sort of divided by all kinds of ways.”

She said she’s been hearing a lot of people saying it’s time for the Navajo Nation to have a woman president.

“I have all this education,” she said. “I don’t want to just sit by the wayside. I thought maybe I could go in there and try something new and maybe things would change.”

Manson believes that right now the Navajo Nation out of harmony.

“So much is happening,” she said. “That’s where the pandemic came too. Our Navajo stories say that someday in the future, when we start going out of harmony, these are some things that are going to be happening.”

She said in the creation stories it was Changing Woman and White Shell Woman who brought beauty and balance back.

“When things were going really bad, women came in and restored things,” she said. “When the monsters were coming about in our stories, in our ways, way back, the woman came in and gave birth to twin warriors.”

Manson says she believes it might be time to dismantle the current Westernized Navajo Nation government system and revive the traditional models of governing and leadership.

“First of all, I think we might be using a government that might not even work anymore,” she said.

“It was a government that was given to us by the bureau long ago,” said Manson. “Later they became the Council, but the BIA kept oversight over them and they could not really do what they wanted or could do – they were just using what Wááshindoon gave them.”

She said that needs to change.

“And people talk about how we have this temporary government, the three-branch government, and yet it’s still here,” said Manson. “They go back to the story of what happened with Mr. (Peter) MacDonald in 1989 and so forth…”

“Every four years, it’s the same thing, but nothing changes,” she said.

“I listen to the Council committee meetings,” said Manson. “They talk about this and that and go round and round and bring up the same issues again and again.”

She said it seems evident there’s no way to resolve all of the issues with the current system in place.

“People are tired of it and then pretty soon people are talking about the politicians and the delegates being crooks, and on and on,” she said. “I thought, you know what, maybe I could make a difference. That’s what really got me to thinking, I really want to run for president.”

Manson, who is from Hard Rock Chapter, attended to Rocky Ridge Boarding School, Tuba City Boarding School, and Norfield Mount Hermon college preparatory school in Massachusetts before she entered Dartmouth College and then graduated from the University of New Mexico with a bachelor’s degree in psychology.

In 1981, she became Miss Navajo Nation and served as an ambassador for preserving the Navajo language, culture and setting high goals in education.

She went on to earn her master’s degree in special education at the University of New Mexico and her doctorate in curriculum, instruction/education leadership from New Mexico State University.

She has taught and served as an advisor and translator for several Navajo school districts and is currently a Navajo language, culture, history and government teacher at Pinon High.

Manson said as a teacher working in the school system, she knows there are deadlines to resolve things and she knows how get things done.

She also comes from a traditional home and family structure, led by women, where things got done too, she said.

She believes bringing back the matriarchal system, where women can reclaim their power, would be helpful.

“I love being a traditional Navajo woman,” she said. “That’s from my grandmother, Ruby Begay. That’s what she wanted and I try to respect it and continue that for her even though she’s not here.”

She said even though more Navajo women are going to school and working, it’s just not recognized.

“How come we don’t have the women in the leadership position then?” Manson asked.

“Because of the colonization and the Bilagáana coming, a lot changed,” she said. “Even how they started saying the man is the head of the household, the man is in charge, the man’s supposed to be the leader.”

She believes that disrupted a lot of home environments as it pertains to raising children and conducting family affairs.

“It took a lot of things out of harmony, I think,” she said. “We could go back and look at that and try to reintegrate it.”

Manson also proposes going back to listening to the people instead of having Window Rock dictate policies.

“What I think might work is developing a constitution and going back to the local level and asking the people, how can we do this better?” she said.

“The traditional approach is going to the families, going to homes,” she said. “They used planning to all get together and help each other take care of their people.”

Manson said she wants to be like a traditional Navajo mother, who will come in and restore things. She said her husband, Amos Johnson, is fully supporting her run for president and, in fact, encouraged it.

“We need a Navajo mother,” she said. “Using the kinship system – K’e – and really coming back to being aware of how we used to relate to each others, how we used to help each others, instead of following the Bilagáana model where everyone is for themselves.”

She also wants to bring inclusive chapter meetings back after everything went remote due to COVID-19.

“It has become very hard to see people in our community,” she said.

She said many residents don’t even know what is happening at the chapter meetings anymore.

“Sometimes I feel like we’re being discouraged to participate too, especially the elderlies,” she said. “It seems like they’re making decisions on their own without the people’s input, which I don’t think is fair.”

Manson said she also wants to create more language and culture immersion programs for Navajo students, as well as teacher training programs, and make sure that Diné Bizaad classes are included in the regular daily school curriculums across the Navajo Nation.

In the next couple of months, Manson said she will be travelling around the reservation to meet with people as part of her campaign and can be followed on Facebook and Twitter.

“I’ve got a lot of invitations so far to rallies, meetings, forums,” she said. “I think I’m having fun doing it – I’m going to give it my best shot with my ideas.”