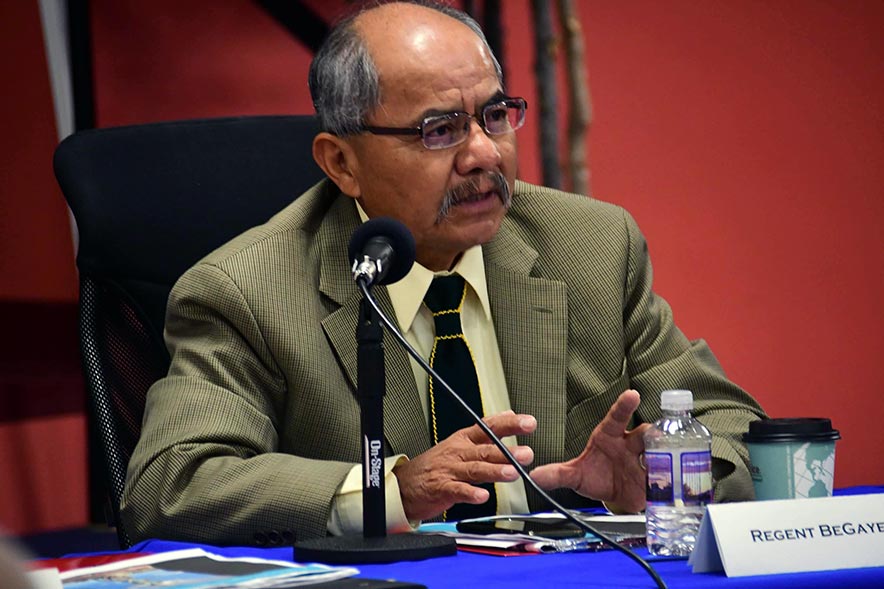 BeGaye was in his fifth term with the current 24th Navajo Nation Council but resigned in July 2019 due to health concerns.

He began his career as a delegate when he was first voted into office as a member of the 20th Navajo Nation Council in 2003.

“I started my fifth term as a delegate,” said BeGaye when he announced his resignation. “How beautiful we were together when we were sworn in. Four years ago we said we were going to be together.

“But, today my colleagues, my relatives,” he said, “I have to apologize today is my last day. I am resigning from my position as a 24th Navajo Nation Council (delegate).”

He served on the Health, Education and Human Services Committee, Budget and Finance Committee and the Síhasin Subcommittee.

He played an instrumental role in several major achievements including the San Juan River Settlement Act in 2010 and helping to secure the largest settlement with the federal government in 2014, which led to the establishment of the Síhasin Fund that continues to benefit many Navajo communities to this day, stated a news release.

“The Navajo people have lost a great leader and a very loving and caring person who devoted many years of service for our Nation,” said President Jonathan Nez.

“I had the honor of serving alongside Honorable BeGaye as a member of the Council and the Budget and Finance Committee,” he said. “He had a great sense of humor and spoke very eloquently in our Navajo language and the English language and served his people with great honor.”

BeGaye was also a member of the Diné College Board of Regents, serving from 2015 to 2019.

Upon leaving the board in October 2019, the board passed a resolution that noted his accomplishments.

The resolution said he played “a key role in increasing the appropriation to Diné College from $4.2 million to $4.7 million by offering an amendment during a discussion about higher education on the Navajo Nation and … a tireless advocate for the college to its stakeholders throughout the Navajo Nation.”

“During the challenging discussions at the college, he provided stability, spiritual connection, and calmness,” said Board President Greg Bigman. “His genuine kindness and care helped shape my leadership.

“When I first got on the board I asked Regent BeGaye if he wanted to do the invocation,” he said. “He mentioned, ‘You don’t need to ask us to do it, just tell us do it.’ That gave me a lot of confidence and trust.”

Vice President of External Affairs Marie Etsitty Nez, a long-time college employee said, “I called him Shiyazhe by clan relation. The Etsitty family from Tsé chi’izhi knew him as the rodeo announcer for the CNRA rodeo association when he was the announcer, a family friend, and their Council delegate.

“I also worked with Nelson serving as the board of regents at the college,” she said. “Nelson was a great leader and he will be missed dearly.”

“Mr. BeGaye was a highly respected naat’áanii with courageous vision who made a profound and long-lasting impact on our Navajo Nation,” she said. “He was an honorable and humble gentleman with a strong spiritual conviction that was well known and acknowledged among our people.”