Controller: ‘Everyone’ should worry about unspent CARES Act funds 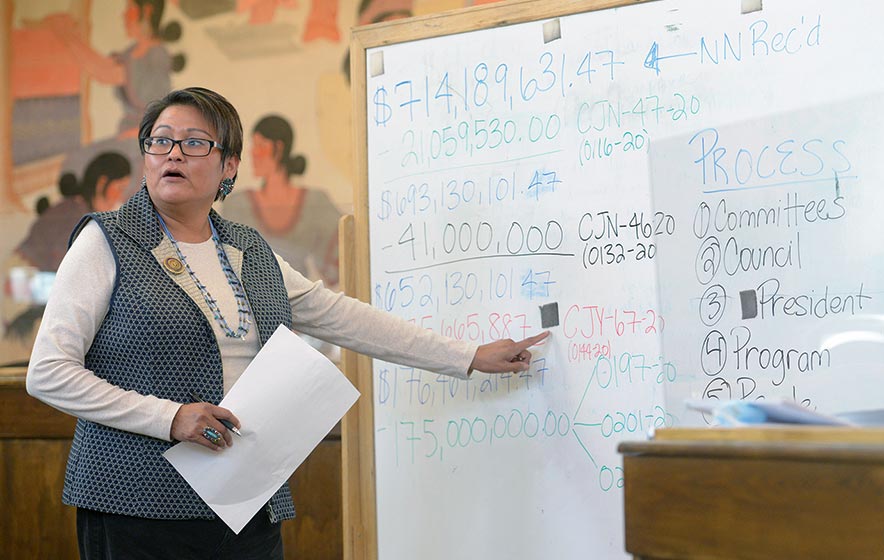 With only 83 days remaining until unspent Navajo Coronavirus Aid, Relief and Economic Security Act funds revert back to the federal government, the people are waiting to see if President Jonathan Nez will approve the $49 million in direct hardship assistance for individuals (Legislation No. 201) and $127 million for chapters (No. 197).

Nez’s deadline to take action, which represents the allocation of the remaining $176 million in the CARES pot, is this Saturday, Oct. 10. In a report to the Budget and Finance Committee on Tuesday, Controller Pearline Kirk said that, as of Oct. 5, only $50.7 million of the Navajo CARES Act funds appropriated have been spent, with $98.7 million encumbered (contracts/agreements in place), leaving an unspent budget balance of $388.7 million.

The only good news about this is that at least some of the unspent $338.7 million could be redirected to bolster the hardship assistance fund and direct payments to the people, but that is easier said than done. Kirk informed delegates that if all 327,726 enrolled Navajos were to receive the full $1,500 direct payments for adults and $500 for minor children, that would cost an estimated $400 million.

Why more of the appropriated monies that were to be administered through the divisions of Health, Community Development, General Services, and Natural Resources, all led by Nez, haven’t been spent is a mystery. “Is there a group on the executive side that can assist to keep these projects moving?” asked Delegate Amber Crotty. Kirk says that some of the delays can be attributed to the amount of time it takes to finalize agreements, budgets, and contracts that have to go through the Nation’s ’164 approval process and then get signed by the president.

“Our office has to work with the various divisions and departments to get that done,” she said. “Sometimes it just takes time for them to work through these documents.” Regardless, said Kirk, all of the documents have to be completed properly and be in place when the U.S. Treasury comes in to audit the CARES Act spending.

“They want detailed reports of where the money’s going,” said Kirk. “In terms of my office, we’re not just responsible for making the payments. We are responsible for ensuring compliance with these federal dollars.” The first round of appropriations passed by the Council and signed by Nez were made as far back as early July. Many delegates believe the delays are unacceptable and the money needs to “go back into the pot,” where it can be reallocated before it reverts.

“I’m worried about sending money back when we could be helping our people,” said Delegate Eugenia Charles-Newton.

Kirk said she too is concerned about the amount of money just sitting in accounts. “We don’t know the details on some of these projects,” said Kirk. “I am worried, and I think everybody should be worried about not expending these CARES dollars.”

Kirk gave as an example the $10 million that was set aside for government office and facility safety measures through General Services that includes things like sanitizing buildings and re-configuring office spaces to accommodate COVID-19 protocols and keep employees safe. “It’s been there since July Fourth,” said Kirk. “The Nation opened back up on August 17.”

According to the controller’s report, not a penny of that money has been spent or encumbered. “My staff has put up shower curtains because they’re afraid,” said Kirk. “We’re still sitting here waiting for plexiglass and so forth. Our employees should be important, especially the ones who are here and are essential.”

Kirk said her office was deemed essential and has been in operation throughout the pandemic, except for four temporary closures due to COVID-19 exposures.

Another shocker is that none of the $10 million appropriated for personal protective equipment has been spent or encumbered through the Health division, headed up by Jill Jim, who also directs the COVID-19 Navajo Health Operations Command Center under Nez. “We can only do what we can from my office,” said Kirk. “We depend on the programs and departments and everyone to do their part. Everybody’s got to come together to make this happen.”

Kirk said she has augmented her staff with consultants, but her office hasn’t received the amount of funding it needs to process all of the CARES Act monies by Dec. 30. She suggested that since it is her office that processes payments and ensures compliance, the powers-that-be should make sure that her office has the resources it needs to do that.

“I feel like it should have been a no-brainer and it should have been done from the beginning,” said Kirk. A controller’s office press release sent out last week explained that while the workload has increased over 200% during the pandemic, there hasn’t been a commensurate staff expansion to accommodate that. Kirk added that the shorter the window becomes to spend the money by Dec. 30, the more resources will be needed to do so. “That has a price tag,” said Kirk. “We have our work cut out for us.”

Kirk said there had been some hope for an extension of the CARES Act expenditure deadline for tribal nations from the federal government. However, with President Donald Trump’s decision on Tuesday to postpone the next coronavirus stimulus package, which contains an extension provision for tribes, it is anyone’s guess as to whether that will happen any time soon, if at all. “All eyes are on us, nationally,” said Kirk, who reminded delegates that Navajo received the largest allocation of CARES Act funds ($714 million) among the federally recognized tribes.

“If the money reverts back to the federal government, that has long-range implications,” said Kirk. “The feds will look at us and say, ‘Those guys didn’t spend it – why should we give them more money?’” If an extension is not granted, Kirk recommends that the Navajo Nation government stay “narrowly focused” on expending the dollars in the remaining timeframe, which means simplifying and automating processes. She said the more new things are added to processes at this juncture, the higher the risk is that the monies won’t be expended.

“For example, if we go to hardship assistance, we have to define the parameters as narrowly as possible,” she said. “That’s the way we’re going to get help to the people.”

It is now up to the Budget and Finance Committee, led by Chairman Jamie Henio, to identify which projects that have not demonstrated they will be completed by Dec. 30 can be reallocated to the hardship assistance fund through Naabik’iyati’ Committee resolution.

This is not the responsibility of the controller’s office or the Office of Management and Budget. It will, however, require cooperation with the executive branch directors. Some projects in Resolution CJY-47-20 already expired on Aug. 31, and per the legislation, the funds can be redeposited back into the Navajo CARES Fund, but that directive also has to come through the BFC.

All of these things take time while the clock is ticking. In cases where a portion of project money has already been encumbered, those would have to be “de-obligated” before they can be reallocated, clarified Kirk. Crotty said delegates are being contacted by many members of the Navajo Nation on and off reservation asking about the hardship relief.

“It’s hard to provide an argument as to why we wouldn’t provide direct relief at this point,” said Crotty. Before the hardship assistance web-portal can even be developed by the controller’s office, said Kirk, the eligibility criteria and the application process will have to be determined by BFC and the Health, Education, and Human Services Committee and adopted through legislation. “We would have to make this process as simple and streamlined as possible and automate it,” said Kirk.

She emphasized that processing such a large number of payments is going to be an enormous amount of work on top of everything else on the controller’s office’s growing to-do list as the Dec. 30 deadline looms. “This is all in addition to our regular jobs,” said Kirk.