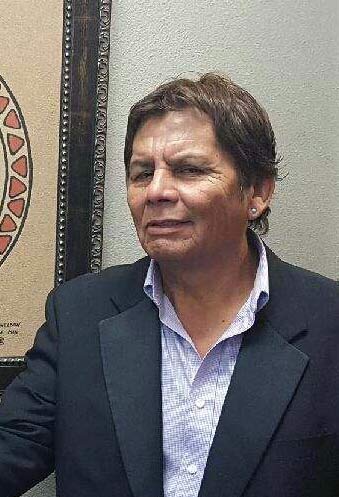 Shawn Pinto Nelson still remembers the first time he made a difference in other people’s lives. A student at Toyei Boarding School, Nelson, whose relatively well off family had recently moved back to the reservation from California, was struck by the poverty of some of his fellow pupils.

“They really had nothing,” he recalled.

Wondering what to do, Nelson decided to write a letter to his hero, Captain Billy of the Albuquerque-based kids’ show “Captain Billy’s Clubhouse.”

“I told him a lot of the kids there needed a lot of stuff,” Nelson recalled. He didn’t really expect an answer, but shortly thereafter, a large box of candy and small toys was delivered to the school. It wasn’t exactly what the kids needed, although Nelson was a bit of a hero himself after that.

It did, however, teach him a lesson he has kept to this day: If you need something, it’s not going to magically fall from the sky. You have to reach out. Since then, Nelson, 62, now of Gamerco, has never hesitated to fill a need when he sees it, whether that meant helping his grandparents cultivate their cornfield, hauling lambs for his uncle John’s meat market, or donating his art to a good cause.

Several people — including his late grandmother, Annie Wauneka — have told him he would make a good leader. A successful artist (sometimes under the pseudonym “Turquoise Boy”) and actor, he never paid too much attention … until his uncle, the late New Mexico Sen. John Pinto, passed away last year.

Widowed and semi-retired, passionate about the environment and the situation of ordinary rural New Mexicans, with experience as a board member for a community development financial institution in California, Nelson thinks now is the time to fulfill his destiny. Unfortunately, a certain virus we could mention did not agree.

“This COVID-19 thing has made it really hard to campaign,” groused Nelson, who has shifted his strategy from visiting chapter houses to doing press and radio interviews and leaving flyers on people’s doorsteps. Nelson did manage to visit Two Grey Hills, Shiprock and Naschitti before the stay-at-home order set in, and what he heard there was encouraging.

“They said, ‘We like what you’re saying,’” Nelson recalled. “They don’t want someone younger in that position. They want someone who’s familiar with the traditional way of life.” Nelson’s opponents in the Democratic primary — his cousin Shannon Pinto, who was appointed to fill the rest of John Pinto’s term after he died, and Dineh Benally — are both in their 40s.

Nelson said he’s running because “I would like to change the lifestyle of our people.” “They don’t want too much from government,” he added. “They can motivate themselves. They’re not looking for a handout. They just need a little help building businesses, building roads, getting water. The state and the tribe can help each other out.”

Nelson, who describes himself as an advocate of “sustainability and community,” is a proponent of the state’s ambitious Energy Transition Act and would like to see New Mexico wean itself from the volatile oil market. However, he’s not a fan of Gov. Michelle Lujan Grisham’s so far ill-fated effort to legalize recreational marijuana.

“Marijuana is a good way of helping someone who is having health issues,” said Nelson, who is Dibé Lizhinii, born for Kin Yaa’áanii. “Giving it to anybody who wants it just invites misuse.”

Instead of planting marijuana, “We need to get back to our corn crops,” Nelson said.

Other planks of his platform include education, health care, social justice, job creation and he’d like to see the state fund two buildings: a library named after his uncle in Gallup, and a civic center for Shiprock.

Above all, Nelson said, he’s not afraid either to give or to ask for help … as he proved all those years ago, when he wrote to Captain Billy.

If Nelson becomes his party’s candidate, he will face Republican Arthur Pierce Allison of Nenahnezad in the general election. The primary election is slated for June 2.