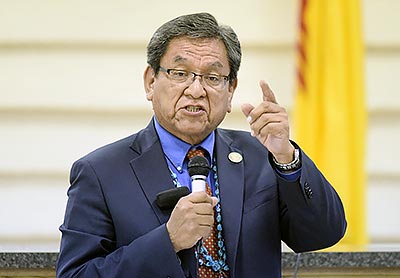 Navajo Nation President Russell Begaye says the tribe is going to sue Gold King Mine and the EPA during a community meeting at the Shiprock Chapter House Saturday evening in Shiprock. ""Looks like we are going to be suing somebody because this is going to come down to Navajo Nation water. I did a directive, we are gonna sue the mine and also EPA," Begaye said. (Times photo - Donovan Quintero)

The executive and legislative branches of the Navajo Nation government spent last week in yet another debate over just how much authority does the president have when he line-item vetoes an appropriation made by the Council. 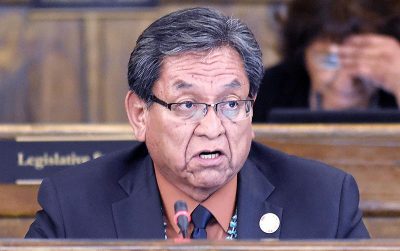 Navajo voters in a special 2009 referendum gave the president the right to line-item veto budgetary items approved by the Navajo Nation Council but does that also allow him to go into that legislation and change the amount the Council approved?

That debate started when President Russell Begaye approved supplemental funding but did it in a way that caused concern for Speaker LoRenzo Bates and other lawmakers.

During the Navajo Nation Council’s special session on Feb. 16, about 15 bills requested supplemental funding from the rapidly depleting Undesignated, Unreserved Fund Balance, which were approved and sent to Begaye for his signature.

Among those items were requests for $148,325 for the Phoenix Indian Center; $300,000 for Toyei Industries Inc.; and $299,139 to purchase three new buses for St. Bonaventure Indian Mission School in Thoreau.

The Council approved the three items as is but once they got into Begaye’s hands he slashed the requested amounts and approved a lesser total for each item.

“The main problem we have is his veto message,” said Bates to the Times. “He picks and chooses, which leads to him legislating. It’s (the) Council who goes through the process. They are the ones who legislate. In this case the president is doing the Council’s job.”

For months, representatives of the Phoenix Indian Center lobbied at committee meetings and Council asking for the $148,325 to continue programs for urban Navajos. It had been line-item vetoed before but this time Begaye approved $44,460, substantially less than what was requested.

“I support an appropriation to the center,” said Begaye. “However, I have been informed by the controller the Navajo Nation is facing a large and growing deficit in this upcoming 2019 budget. I must exercise my line-item veto authority for some of the costs.”

Bates explained that the wording in Begaye’s memo, “I hereby exercise my line-item to …” indicates the item in its entirety is vetoed — but in this case, Begaye actually changed the Council’s appropriations rather than veto them.

But by doing this, Bates is arguing that Begaye is exceeding his authority and is usurping the authority of the Council.

Bates added that reducing the amounts will have “serious consequences” for the three organizations.

This nonprofit organization provides residential and non-residential sheltered employment and training services to physically and/or mentally handicapped Navajo adults. The funding would go toward continued services.

Begaye noted that the president’s office had previously entered into an agreement with Toyei Industries, in which the entity was granted approximately $100,000 from the office’s budget.

“As part of the arrangement, it was made clear that this was a one-time grant,” said Begaye “This request is contrary to that understanding. Toyei needs to seek grant funding to supplement any budgetary shortfalls they might face.”

Bates said the Council might have been more judicious in its appropriations if members had known about the 2019 shortfall. He said this piece of information was never given to them but it was shared with the chair of the Budget and Finance Committee, Seth Damon.

“During this process of Council there was no indication that there could be a shortfall,” said Bates. “That message could have easily been provided by Office of the Controller, Minerals, and even the president.”

Currently the UUFB balance is at a level of $15 million.

The big issue here, however, is just how much authority did Navajo voters give to the president.

Bates is arguing that Begaye’s “misguided practice” of using his authority in this way “increases the need to initiate guidelines to protect the integrity of the presidential line item authority granted by the Navajo people.”

Bates also believes that by changing the amount of the appropriation, Begaye is legislating, which is not within his rights. Legislative matters are the sole authority of the Council, he says.

While the two branches have gotten into debates over the president’s use of the line-item veto in the past, this, by far, has been the most serious.

If guidelines have to be initiated, as Bates said, it appears that this may be headed to the Navajo Nation Supreme Court for a decision on just how much power did Navajo voters give to the tribal president in 2009 in this area.