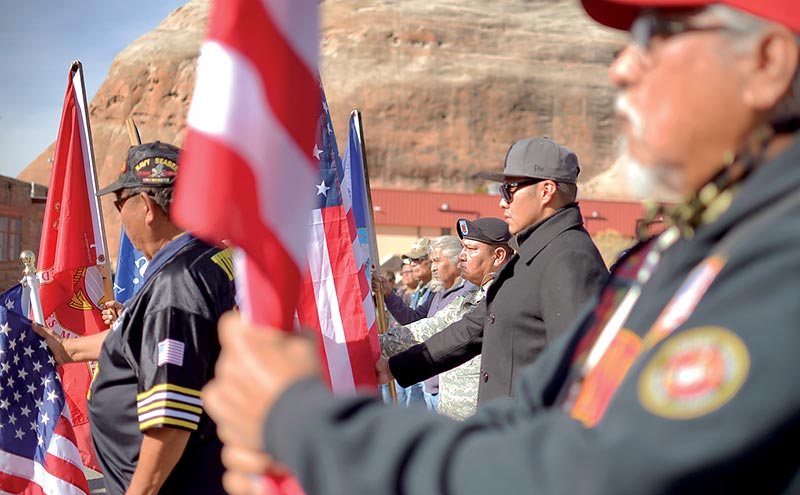 Navajo Times | Donovan Quintero Veterans protest the veto of a recent bill that would allow distribution of benefits from the 4 percent of tribal revenues that is supposed to go into the principal of the Navajo Veterans Trust Fund.

In a swift and unanimous vote, the Navajo Nation Council made a defiant decision to override President Russell Begaye’s veto of changes to the Veterans Trust Fund.

Begaye vetoed the bill in November.

The Council Chamber was nearly full during the Dec. 22 special session with veterans from across the Navajo Nation waiting for lawmakers to vote on the override. Many believed Begaye did not completely understand the proposal.

In a Nov. 2 memo, Begaye stated the “primary reason” for vetoing the bill “is the new language is unclear and can be interpreted to de-fund the Housing Program for Veterans.”

The other reason for his veto was “by diverting the set-aside to Veterans Trust Income instead of Principal (it) will immediately halt the growth of the Veterans Trust Fund.”

But even after meetings were held for legislative and executive officials to work together, it all hung in the balance of the 16 votes needed for the override. The final vote was 22-0.

After the vote, executive branch officials continued to oppose the bill saying it will stop the Veteran’s Housing Program.

The set-asides will no longer be reinvested into the Veterans Trust Fund, the officials said, and this will stop any growth of the trust fund’s principal.

But veterans like Olin Kieyoomia, Fort Defiance Agency Veterans Organization commander, believe the Veterans Trust Fund bill has been a long time in the making and now it’s up to Begaye to sit down and hash out the details for another bill (No. 0191-17). This separate bill would increase the annual set-aside from four percent of the Nation’s annual revenues to 10 percent.

“It’s been 30 years since any significant increase in veterans benefits or assistance,” said Kieyoomia, after the vote. “This was just a language clarification legislation. Hopefully, he will take up the offer we are offering right now as far as coming to the table.”

After Begaye vetoed the legislation, veterans marched to the president’s office in protest. Neither Begaye nor Vice President Jonathan Nez was available to meet with the marchers and they spoke to Hubert Smith, acting director for Navajo Veterans Affairs.

Kieyoomia reluctantly skipped the march because days before it took place, the president’s office sought a protective order against him due to Facebook posts that had Begaye and his staff concerned for their safety.

“This is the first obstacle we need to hurdle,” said the bill’s sponsor, Council Delegate Tom Chee. “The bigger part is the 0191-17 legislation that will require redefining of how does all this fit in the overall veterans plan? It’s going to require legislative planning as well as executive. It’s going to require teamwork.”

But not everyone was on board with Kieyoomia and the other veterans who were supporting the override. A resolution from Tsé Daa Kaan Chapter Veterans Organization stated it was opposed to the override and asked instead for a panel of veterans to review and evaluate the Veterans Trust Fund policies and procedures before developing a bill.

The resolution also brought up the entity that seems to receive funds and favor from the Council when it needs it, and that is the Navajo Gaming Enterprise.

Another resolution in support of Begaye’s veto was from John King, Iyanbito veterans commander, and members of the Eastern Navajo Veterans Organization. King said their concern was the vague language.