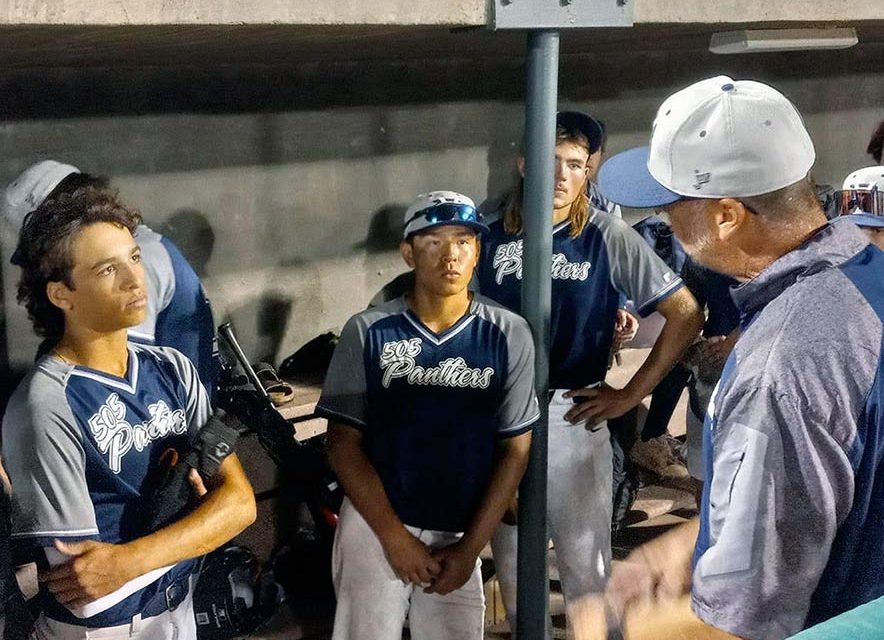 Aidan Etsitty didn’t have the senior year he would have liked.

The Piedra Vista outfielder tore his posterior cruciate ligament a week before the start of the spring season and he did not get a chance to play for his high school team.

But through rehab, he was able to able to work his way back and joined the 505 Panthers, which represented the Farmington city league in the 2022 Connie Mack World Series.

“It’s been a hell of a ride,” Etsitty said. “I’ve been wanting to be here since I was three years old when I started playing baseball.

Etsitty was one of three Native Americans on the 505 Panther squad that was made up mostly of the varsity members of the Piedra Vista baseball team.

The other Natives that made the team included Arnold James and Izrel Janssen.

Of the three players, Etsitty got to pinch-hit for the 505 Panthers on July 27 against the Florida Legends in an elimination game.

Etsitty batted in the top of the seventh as the 505 Panthers were eliminated from further play after coming up short 8-2.

“He’s a senior that graduated,” 505 Panthers coach Jeff Kiraly said. “We felt like he deserved an at-bat, so we gave him one.”

Etsitty said the pitchers they saw at the Connie Mack World Series were throwing a little harder, and they had more control.

“It was a big adjustment because these guys were throwing in the high 80s,” said Etsitty, who struck out. “I did what I could.”

And although he did not get playing time, James said it was great taking part in his first Connie Mack tournament.

“It was super fun,” he said. “I got to experience this with all of my teammates.”

Both players got more playing time in the Farmington city league as the 505 Panthers went 10-2-1 overall, losing its only two games to the Frackers.

And although they finished second to the Frackers in the regular season, the 505 Panthers won the city tournament to get qualified.

“I think it was an even matchup,” Etsitty said of the Frackers, their chief rivals.

But in the city tournament, the difference came down to pitching rotation.

“Our pitchers were phenomenal,” Etsitty said. “That is how we made it and without them we probably wouldn’t be here.”

In the fall, Etsitty is headed to Eastern New Mexico University and he’s going to try and walk onto the Greyhounds baseball team.

“That’s the plan,” the 505 Panther outfielder said. “I think I would have a few offers, but I didn’t get to play my senior year.”

James, meanwhile, sees himself in the pitching rotation for the 2023 spring season for PV under Kiraly.

“Pitching is one of my favorite things to do,” he said.

James, who is entering his senior year, is a right-handed pitcher. He has three pitches in his repertoire: fastball, changeup, and curveball.

“We’re going to have Arnold back for another year,” Kiraly said while adding that most of his players will be seniors this coming year.

“This is great experience for our guys at Piedra Vista High and it helped them mature,” he said.

With the experience they got, Jones believes the future looks bright for the PV squad next season, as they will compete with Eldorado, Farmington, La Cueva, Sandia and West Mesa in District 2-5A.

“I believe there’s a ton of potential for this team,” he said.

Last season, the Panthers finished in fourth-place in the six-team district with a 5-5 record.

“We had five teams make the playoffs, so in my opinion we played in the toughest district in the state,” Kiraly said, while adding that he expects another tough go at it.