When Lance Morris was in middle school he saw older Navajo boys leave the reservation one by one.

He realized that they were leaving to chase their dreams and hoped to one day do the same. 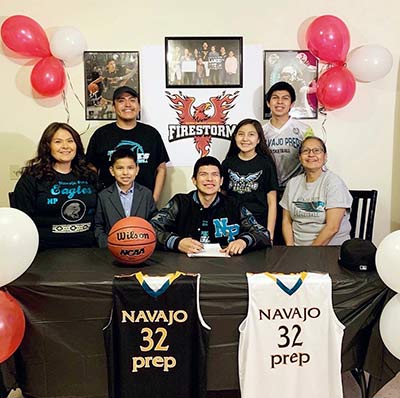 Morris, who graduates from Navajo Preparatory School this month, will fulfill his dream as a member of the Arizona Christian University men’s basketball team in Glendale, Arizona.

Morris, who is from Sheep Springs, N.M., signed his national letter of intent last week.

The 18-year-old said when he heard the news, he was relieved and happy.

Morris grew up in Fort Defiance where he started playing basketball, playing in a youth league and later on a traveling team.

He said basketball brought him a kind of joy he wasn’t able to get elsewhere.

“I had fun with the game and how I got to learn more about it,” Morris said. “I get to practices, it was fun, just being able to handle the ball, play with teammates, having fun while I had my parents on the sidelines watching; it was always a great feeling.”

Not long after falling for the sport, he vowed to work his way to become a college basketball player.

Once he reached high school, he chose to attend Navajo Prep.

He immediately made a big impression but struggled a little with his new living arrangement. He made the varsity team and had a starting spot.

He was also an avid football player, something Morris said was a tool he used to help his basketball game.

Once football season ended, he was as ready as he could be for basketball.

“Playing football was an advantage for me,” he said. “Football helped me get ready for basketball.”

In his freshman year, the team finished as district champions and earned a ticket to play in the state tournament but fell short in the first round.

Things became challenging once again after his junior season. Morris said he and the rest of the team had to make adjustments after losing their coach and welcoming in a new one.

“That was the hard part because if he stuck with us it would have been a good season, because of what he had built at Navajo Prep,” he said. “But I learned from those, which is always good. Now I have that experience of having a coach change and facing that change.”

Morris also put in work in the off season by running, weightlifting, and working on his shots.

“I was just trying to stay in shape for the season,” he said.

Not long after his final season, Morris decided to work with a recruiter to help him through the recruiting process.

He said he was determined to find the best fit for him.

Morris’ mother, DeAndra Wagner, said her son put in all the work necessary to provide opportunities for himself, which she was most proud of.

“I could see that he kind of felt down because he didn’t have any recruiters coming out to him. I was always encouraging him ‘Don’t give up, just keep doing what you got to do,’” she said. “When the pandemic stuff started, his coaches started to reach out to him and he said he had a plan so I trusted him … He made his own highlight tapes … I just told him ‘Follow your dreams and trust your process,’ and he did that.”

Wagner said she and Morris’ father Olyne Morris were ecstatic for him and proud of the way he managed to do things for himself.

She said it’s been a pleasure to watch him grow to be passionate and independent.

“I was excited for him. He trusted his dreams and when it came to him it was like a joy for me because you sit back, and you watch your child do all the work,” Wagner said. “I told him ‘This is all you’ and I’m proud of him for that.”

Morris plans to study sports management and looks forward to the next step in his future.

He said he already has plans for his first season and looks forward to many more accomplishments.

“It’s close to home, my parents and family. They’re always telling me to get off the reservation and go somewhere far. I feel it’s a good fit for me,” Morris said. “I’m just trying to earn my spot on the team, I’m trying to outwork everyone, and overall I’m just trying to use basketball to get an education.”