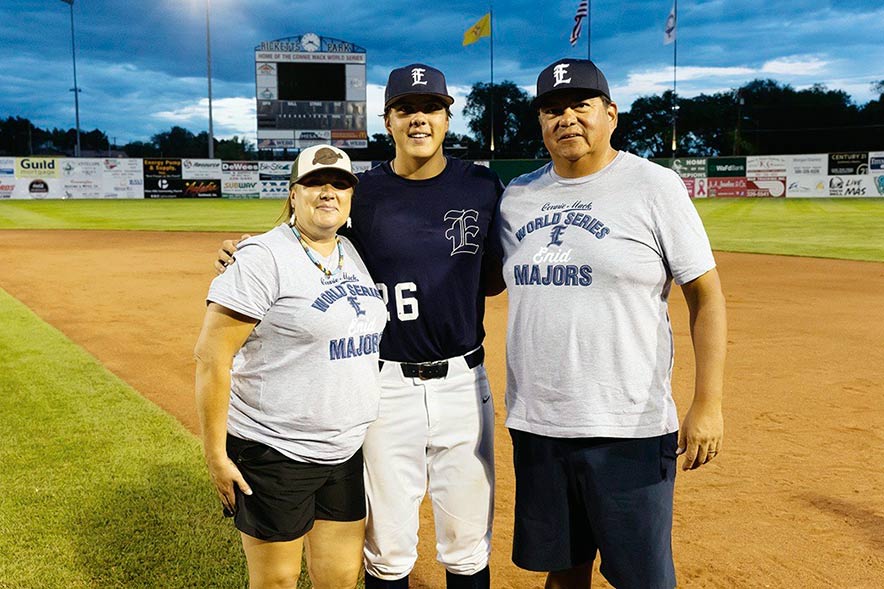 Special to the Times | Curtis Ray Benally
Jack Hill (center) poses with his parents Linda and Jamison Hill at the conclusion of the 2021 Connie Mack World Series championship game between Enid Majors and D-BAT United at Ricketts Park in Farmington on Saturday, July 31.

History was made on July 31 for the Enid Majors team from Oklahoma.

This is the team’s first time to the Connie Mack World Series and they made it worthwhile by winning the championship. Among the team is a Native player named Jack Hill who garnered a small following in Farmington as they witnessed his skills on the field.

“I have learned so many life lessons from baseball,” Jack said. “One that always comes up to my mind is never let the fear of striking out hold you back. I try to better myself every day. I know I only have one shot at achieve my dream of becoming a MBL baseball player. So, I try to put work in every inch and every day to achieve that.”

Jack has been in love with the game of baseball since he was young. He was born in Onamia, Minnesota, but grew up in Edmond, Oklahoma.

At 3 years old his parents received a flyer for a youth T-ball team. With them being a baseball family, his mother, Linda Hill, decided to sign him up and from there, Jack’s passion began.

He has been playing baseball every year since then. He also played football, basketball and soccer, but baseball has always been his favorite. When he isn’t playing for the school team, he is playing with a club team. His father, Jamison Hill, said Jack always made sure he was at the top of his grades while playing.

“He exceled at school,” Jamison said. “He’s a smart kid and a hard worker.”

He is part of three tribes: Oneida, Kiowa and Comanche. He respects all three of his tribes and takes the time to learn values from each of them.

“I think being Native is one of my main unique characteristics and I am not really sure how to put it,” Jack said. “I do not shy away or in any way try to hide that I’m Native it’s always been a part of me and my family’s lifestyle. We try to stay connected as much as possible.”

The Connie Mack World Series isn’t the first tournament he played in. He’s traveled as far as to Florida to play against elite athletes from across the country.

His time at Connie Mack was his first time traveling west.

Initially, Jack wasn’t part of the Enid Majors team because the roster for the upcoming tournament was full, said head coach Kris Webb. But when he heard Jack was interested in going, he quickly made space for him.

“He pitched against us in the regional tournament and I went to watch him in the regional qualifier,” Webb said. “He’s a competitor, he does everything right, plays really hard. Some of his old teammates were already on the team and they were adamant that he would help us be successful and man were they right. He’s a winner, a great player and a great teammate. I have nothing but upmost respect for Jack.”

Although there were limitations to Jack’s visit due to the pandemic, he said he had a great time at Farmington and thanks his host family for having them.

Their final match was against the D-Bat United team from Texas. The Majors were able to score quick hits and maintained their lead before winning with 4 to 1.

“It went as magical as it could go,” Webb said. “It was a great experience for the boys, for me personally and for so many different individuals, it was very special. This was Oklahoma’s first trip ever to the Connie Mack and our first time to Farmington, so it was an absolute first of first.”

Webb commends Jack as well as his other players during the final game. Those players include Zandt Payne, Kade Goeke and his three pitchers Kaleb Melvin Blake Priest and Will Farr and also Cayden Brumbaugh who hit a homerun.

Being a part of the 2021 Connie Mack World Series is one of Jack’s last highlights before moving on to the next level in baseball.

This spring Jack graduated from Deer Creek High and was his class’s valedictorian.

Despite the difficulties of the year caused by the COVID-19 lockdown, he was able to adapt to his online classes and excel in online work.

Even though there were no baseball games going on, he maintained his discipline by working out on his own and also using the time to focus on his goals: take a step back to reevaluate his love for the sport and how much it meant for him, giving him an extra boost when he played later in the year.

Jack also got a high score on his ACT at 33 points. The highest possible score on the ACT is 36.

He got a lot of offers from different schools and ultimately chose Cowley College in Kansas, which has a history of churning out great baseball players.

He is uncertain of what he will study, but is leaning toward something in the health field like physical therapy or sports medicine.

Jack’s dream is to make it to the big leagues in the MLB like Jacoby Ellsbury, a Navajo who inspired him.

Jack says there’s just something about seeing another Native, someone with a similar background as him, showing that it is possible for a kid like him to play in the big leagues someday.

“I am really excited to get started,” Jack said. “It’s always been my dream to play college baseball and to be one step closer.”

Jamison said his son has always remained humbled and never boast about his achievements, but Jack is nevertheless proud of them, of his grades and of his heritage.

Jack will be the first in the family to go to college on a sports scholarship. He’s planning to play hard while in college before transferring to a Division I school to continue his training and become a professional baseball player.

“I would tell the younger generations that you only get one shot at achieving your dream and so I’ll just tell them to put everything they have into it and I really hope to impact the younger native youth,” Jack said.