I first met Kenji Kawano in 1976, young man who came to the Navajo Nation in search of an adventure and see the “Indians” known as Navajos. 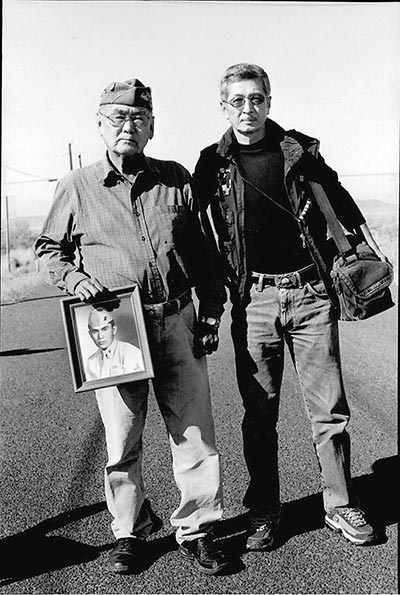 He was a rather peculiar young man, full of enthusiasm and somewhat intriguing.

He had come from Japan only a few years before I first met him. He did not speak much English but spoke as best he could.

Somehow, we got off to a good start, becoming friends right away. We liked the usual and the unusual. He was the extrovert, and I was the introvert.

He saw black and white in everything, and I saw color in everything. He saw things in a linear pattern, and I thought in spirals. We were compatible.

Months earlier, in 1975, Kenji happened to be hitchhiking in the summer and was picked up by an older gentleman and his wife. It was Carl N. Gorman, the famed painter and one of the original 29 Navajo Code Talkers.

Mr. Gorman was one of the men who created the codes in the Navajo language used during World War II against Japan.

Kenji recalls this encounter, saying, “The best hitchhike I ever had.”

Mr. Gorman told Kenji that the Navajos being part of the U.S. Marine Corps had gone to World War II with Japan in the 1940s. Kenji found it fascinating. He knew nothing about the Navajo Code Talkers.

In September 1975 he met the other members of the Code Talkers and took photographs of them at the Navajo Nation Fair parade.

These 400 Navajo men had left their reservation for the first time at a young age. Navajo people had to stay within the four sacred mountains of Dinétah. But when the U.S. military called, they were ready and willing to fight for their country.

These men were brave and used their coded Navajo language to help win the war. What a remarkable achievement this was for the Native Americans who went to a foreign war.

Kenji believed that this story needed to be told. This story had to reach all Navajo people. However, it took approximately seven years to realize that he needed to photograph each surviving Navajo Code Talker.

This project took him another three years to complete. Finally, in October 1990, Kenji received his first batch of his published book, “Warriors, the Navajo Code Talkers.” This book has been reprinted many times since.

In the past 31 years, Kenji’s work has toured more than 50 times throughout the United States as a travelling exhibit, including the CIA building in McLean, Virginia, and the Southwest Museum in Los Angeles.

There were three exhibits in Japan in 1993 and 1994. Other exhibits were at Ramstein Air Base in Germany, the Air Force Academy in Colorado Springs, the Heard Museum in Phoenix, and many other museums, galleries, universities, and libraries.

Kenji has also spoken about his work with the Navajo Code talkers locally and globally such as at the American Memorial Park Visitors Center in Saipan, Konica Plaza in Tokyo, Kennedy Museum of Art at the Ohio University, and the Mattie Kelly Arts Center in Niceville, Florida.

Kenji’s work has appeared in magazines such as the National Geographic, Smithsonian, Cowboys and Indians, Native Peoples, Royal Wings, and numerous other magazines and newspapers.

This month of August, Kenji’s work will once again feature about 100 photographs of the Navajo Code Talkers, all black and white, gelatin silver prints from 1975 through present day, at the Navajo Nation Museum in Window Rock.

Some of these prints have never been exhibited or published.

There are three sections of this exhibit. One is work from the book, “Warriors.” The second is called “Post Warriors,” photographs since 2000. The third is photographs of Code Talker activities since 1975.

The opening reception for “Navajo Code Talkers; Through the lens of Kenji Kawano,” is scheduled for Thursday, Aug. 12, at 5 p.m. Zonnie Gorman, Navajo Code Talker historian, and me are curators of this exhibit.

Back to our story. Kenji has come a long way in terms of getting to know the Navajo people. He befriended many people here.

He met and married a Navajo girl. Then came a daughter, Sakura. Today, two beautiful granddaughters keep him young.

Kenji has travelled extensively, photographing and visiting people on the Navajo Nation. Kenji speaks a little more English and Navajo now, has helped butcher sheep, herded sheep once, and has immersed himself in Diné culture.

Truly, he has become a man of honor in Dinétah, surviving in a culture he has called home for 47 years now. He has opened up the world of the Navajo Code Talkers to not only the Navajo people, but to the globe.

The world now knows the Navajo Code Talker story because of his photography. I call that the best “hitchhike” from Japan.